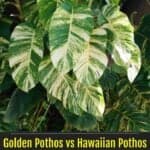 Pothos fans are simply over the moon about how many cultivars are there. Unfortunately, the more pothos cultivars you look at, the more likely there will be two or more than are nearly identical.

Such is the case with the famous golden pothos and the lesser-known Hawaiian pothos. With two beautiful plants to choose from, some important differences between the two make it easy to spot which one you’re buying once you know what to look for.

As mentioned, there are some key differences between these two plants and several essential similarities.

Let’s start with how to tell them apart, then move on to why it’s fun to own both.

There are 4 key differences between golden pothos and Hawaiian pothos (not counting their names).

These 4 differences (in order of how easy they are to spot) are as follows:

A common misconception is that vining plants have a vine and multiple stems.

In reality, the stem is the vine, and the smaller stem-like structures connecting to the leaves are called petioles.

Hawaiian pothos has beautiful green stems and petioles that can be quite attractive on their own.

Conversely, golden pothos has spring green to yellow vines and petioles. In some cases, the latter can even develop minor variegation.

Note that the stem and petiole colors we’ve mentioned are for healthy plants where all conditions (as minor as they are) are being met.

When the plants are sickly or not getting proper light, the coloration of the stems and petioles may fade, darken, or become a sickly shade of yellow.

The word fenestration is a fun one. The term means “window” and tends only to be used to describe two phenomena:

Golden pothos is a cultivar that sometimes develops fenestrations. As the leaves age, the interior surface can split, forming natural windows.

It’s believed these fenestrations allow light and water to pass through the otherwise thick foliage.

Note that you won’t always see fenestrations appear on golden pothos, but they’re a conversation starter when they do.

Fenestrations are not known to occur on Hawaiian pothos plants, making this an uncommon but distinct difference between the two plants.

Depending on the age of your pothos plant and whether it’s getting proper light, this is one difference you may or may not be able to spot easily.

Both plants have streak variegation which roughly follows the veins but can be either splotchy or long and thick.

Variegation can also vary from one leaf to another, making every leaf unique.

Conversely, golden pothos gets its name because the streaks are more vibrant, with some white but mostly bright yellow to spring green that often threatens to take over the leaf.

This difference is perhaps the only reason you may need to be able to tell these two cultivars apart.

Both plants need bright, indirect light and can be damaged by direct sunlight (except for a bit of morning exposure).

However, the variegation on Hawaiian pothos is more delicate. It only requires slightly longer or more intense periods of sunlight than golden pothos to maintain the variegation.

If the leaves of your golden pothos are reverting to solid green when you’re giving it the proper amount of light, you may have Hawaiian pothos instead.

While there may be a few differences, these two plants have a lot in common.

Here are just a few f the notable similarities which can make it so tough to tell these plants apart.

If you’re wondering why these plants are so similar, this is the reason – both are cultivars of Epipremnum aureum.

The parent plant is sometimes called money plant or devil’s ivy but has also been referred to as golden pothos.

This latter nickname has caused confusion, as the actual scientific name for the golden pothos cultivar is Epipremnum aureum ‘Golden.”

It’s common for a cultivar to be nicknamed by using the cultivar name followed by the most common name for the plant type, hence “golden pothos” and “Hawaiian pothos.”

When looking online for a specific plant, keep this in mind, as it’s quite common for different plants to share common names.

Epipremnum aureum is often confused with similar-appearing philodendron species, but there’s a key difference: the cataphyll.

This feature doesn’t exist in pothos plants, where the leaves bud and unfurl without any special protections.

Sometimes cultivars can vary significantly in size, but not these two.

In captivity, the two cultivars will reach a maximum height of 10’ feet but can grow to around 30’ feet if left in the wild.

The leaves are also similar, although Hawaiian pothos is slightly larger and tend to grow just a tiny bit faster.

These plants have a trailing habit but can easily be trained to grow up moss poles or trellises.

With these two cultivars so closely related, it should be no surprise that they have nearly identical care needs.

This not only includes their preferences for temperature, water, and soil; but also propagation methods.

The only real difference in care is the lighting requirement.