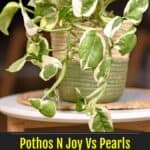 It’s hard to go wrong with a good pothos plant.

They are generally more compact than similar plants, such as philodendrons and monsteras, but they come in a wide range of shapes and sizes with plenty of variegated options.

Two of these options are the cultivars Pothos ‘NJoy’ and Pothos ‘Pearls And Jade’.

There are a lot of similarities between the two plants, causing them sometimes to be mislabeled by online sellers.

However, several differences between the two plants might make one more attractive to your personal tastes than the other.

Pothos ‘NJoy’ vs ‘Pearls And Jade’ (Differences and Similarities)

The differences between these two plants aren’t readily apparent until you know what you’re looking for.

However, quite a few similarities make the two equally worth adding to your pothos collection.

Differences Between ‘NJoy’ and ‘Pearls And Jade’

There are a few differences between the two plants, which might seem difficult to spot until you know what to look for.

The most obvious difference is variegation, but the size and shape of the plant and its leaves are also slightly different, as are some specific tolerances to environmental conditions.

Pothos’ NJoy’ has undergone a few changes since it was first introduced.

The modern ‘NJoy’ has slightly smaller leaves that measure around 2.2″ inches long and 1.6″ inches wide.

These leaves grow in an alternating pattern on the stem and often have an ovate or arrowhead shape.

On rare occasions, the leaves may become deltate (triangular).

The upper leaf surface is smooth and waxy, but the underside has a more leathery texture.

The leaves are also thinner, with people often describing them as having a papery feel.

As for shape, the leaves tend to be more heart-shaped than with ‘NJoy.’

When given proper support, both of these plants can reach a height of 7′ to 10’ feet, although the vines can also be allowed to trail.

When grown as a trailing plant, ‘NJoy’ will only reach 6″ to 12” inches tall before toppling over, while ‘Pearls And Jade’ will manage around 7.5″ to 8.5” inches before falling over.

‘NJoy’s heavier variegation means it tends to require more light but can handle lower lighting conditions if you don’t mind losing that variegation.

However, ‘Pearls And Jade’ is much more fragile, and the thinner leaves scorch more quickly in harsh, direct sunlight.

It also has a greater risk of being damaged in sudden strong breezes.

Oddly enough, ‘Pearls And Jade’ has a slightly better tolerance for overwatering than ‘NJoy,’ although both are susceptible to root rot.

This is the most striking difference between the two plants and why many growers prefer one over the other.

Pothos ‘NJoy’ has leaves that mature with clearly defined variegations.

The dark green of the leaves rests on a pure white to a cream background which often dominates the upper surface of the leaf.

In certain conditions, such as low lighting or poor humidity, the white may turn to a pale yellow-green.

Pothos ‘Pearls And Jade’ has a slightly different story.

The leaves on this cultivar are a brighter green with variegation that ranges from white to light gray, cream, or pale yellow.

The variegation occurs in patches or stripes, usually along the margins, and may contain smaller green splotches.

Similarities Between ‘NJoy’ And ‘Pearls And Jade’

Of course, these plants have a similar lineage, resulting in the two having a lot of important similarities.

The care needs for these two plants are nearly identical.

The only differences are in ‘NJoy having a higher tolerance for direct sunlight due to its thicker leaves and ‘Pearls And Jade’ being slightly less sensitive to overwatering.

Both plants will benefit greatly from a north-facing window or bright sun with some afternoon shade in the morning or evening.

These plants are descended from Epipremnum pinnatum, but not directly.

As a result, while the grandfather species is known to produce flowers in the wild, neither Pothos ‘NJoy’ nor Pothos ‘Pearls And Jade’ will produce blooms of any sort.

More importantly, even if you found a way to make them flower, neither cultivar would be able to reproduce via seeds and would instead provide you with mystery offspring.

As mentioned earlier, These plants are semi-epiphytes, meaning they trail along the ground until they find something to climb.

This means you have three different ways to grow them.

They will climb and achieve a respectable height if you provide them with a moss pole or other support structure.

If you put them in a hanging basket, the trailing vines will instead cascade down, providing a waterfall of foliage.

Finally, many growers like to keep these two cultivars in pots on a flat surface such as a table.

They then occasionally prune the vines, resulting in a small, compact plant that rarely reaches more than 2’ feet in height.

These two plants are also relatively slow growers, taking around 10 years to reach their full height under ideal conditions.

Last (but certainly not least), these two plants share a common heritage.

The Mid-Florida Research and Education Center decided to force a mutation in the cultivar Pothos ‘Marble Queen’.

After several years, this experiment led to a stable mutation dubbed ‘Pearls And Jade.’

Meanwhile, ‘Marble Queen’ has been known to produce the odd mutation.

One of these was discovered in Mumbai, India, in 2002 by Ashish Arvind Hansoti.

Identified as a natural branch mutation of ‘Marble Queen,’ the specimen was subjected to a planned breeding program over 25 generations to ensure it was a stable mutation capable of producing identical clones.

This cultivar was named ‘NJoy,’ and while the original mutation had larger leaves than the one we know and love, it is, indeed, a plant that can be propagated without the risk of surprises.

So Which Is Better?

Both of these plants are worth adding to your collection, but what happens when you have to choose?

Go with Pothos ‘NJoy’ when you want sturdier foliage. It has different textures and boasts a predominantly white upper leaf surface.
However, if you want more muted variegation and prefer heart-shaped leaves, Pothos ‘Pearls And Jade’ is the way to go.