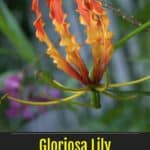 Have you ever planted Gloriosa lilies and never had them flower? Sam Caldwell of Tennessee had that problem. But no more! Tim shares his Gloriosa lily growing revelation and experience.

Years ago I tried to grow Gloriosa rothschildiana, or glory or climbing lily as it is commonly known. The V-shaped tubers were intriguing. They sent up slender, vine-like stalks with leaves oddly elongated into curling tendrils that, for support, gripped anything within reach. But there were never any blooms, so I lost interest in them.

While in the military down in Florida for some two and a half years, I became well acquainted with the glamorous Gloriosas, which are rather plentiful in the balmy climate. There I learned the reasons for my previous failures:

Success With Gloriosa Lilies At Home

Since returning home I have grown and flowered gloriosas with complete success for two years, under outdoor summer culture in Tennessee. Friends in Washington state, Missouri, New Jersey and Massachusetts tell me they also do well with gloriosa lilies. It would seem that this plant novelty more northern gardeners might enjoy.

The Spectacular Upside Down Flower

Certainly the spectacular “upside down” flowers will attract attention. They have eye appeal in both form and color. The reflexed petals are curled and crinkled along their edges, clear yellow and red in newly opened blossoms.

An interesting color transition to an all-over deep red occurs as the flowers age. The stems are strong and the blooms last well when cut. Florists, years ago in fact, used them in corsages.

Generally speaking, glory lilies are handled like gladiolus and other tender summer blooming bulbs. No doubt they’ll succeed under a variety of treatments, but to get at something definite, I’ll describe the routine under which mine are thriving.

After frost danger is past in spring, I put newly purchased dormant tubers, as well as my own old ones (brought from winter storage in the basement), in a shallow box of peatmoss on a back porch shelf.

Since something – probably a mouse – gnawed the end off a nice tuber once, I’ve covered the box with a screen.

Exposed to outdoor temperatures, the tubers sometimes remain dormant for weeks. As the days become warmer I keep an eye on the box. Usually toward the end of April, the small, smooth buds at the extreme ends of the tubers start swelling. Before long there are pink sprouts ready to start up, with white rootlets emerging beneath them. Tubers at this stage are removed for planting.

The size of the dormant tubers, conditions under which they are wintered and, of course, the weather are all factors influencing their spring awakening. From last season’s notes I find that some gloriosas were ready for planting on April 28, but the last ones didn’t get into the ground until June 12.

Most of my tubers are set in pots and tubs, although a number of them go directly into the ground. Possibly, I get the best increase in size from those planted in the ground.

On the other hand, it is very difficult to dig them up in the fall without breaking some, as they are very brittle. Those in pots can be simply turned out. Also, it is easy to move potted ones around wherever I want them at blooming time.

In any case a special soil is used. About 1/3 sand and the rest a mixture of garden soil, peatmoss, a little well-rotted cow manure, and bits of broken charcoal.

Probably a simpler formula would be all right – just good garden soil mixed with plenty of sand. The drainage must be nearperfect. A thick layer of broken pots or gravel is placed in tubs and pots before the soil is poured in.

Tubers are planted horizontally, 2” to 4” inches deep, depending upon their size.

Their size, too, determines the container used. I put one tuber in a 5” – 7” inch pot. Sometimes three or four large ones in a tub. They are watered moderately at first. After green shoots appear above the ground the plants are given a drink two or three times a week.

My gloriosas grow in a nook near the house, protected on two sides by trees and a wall. They get sunshine for a little over half the day. But this is sunny Tennessee. Farther north they’d probably need more open exposure to the sun.

The stalks grow rapidly, and it is not unusual to have bloom six or seven weeks after the tubers are planted. My blooming plants are 2’ to 4’ feet high. Not quite the 8’ foot giants I use to see in Florida, but the flowers seem to be about as large.

After flowers are gone I continue watering the glory lilies through the late summer and into the autumn. This helps maintain the plants and fatten new tubers for the next season. If foliage yellows and dies, water is withheld.

Before frost, tubers growing in the ground are dug and brought into the basement for drying off. Potted and tubbed tubers also are brought inside and allowed to dry for several weeks.

In fact, I have left some undisturbed all winter in the dry earth of their pots. Ordinarily I turn them out and store all the tubers in a plastic box of dry peatmoss until spring comes again. The basement gets cold in winter but never quite down to the freezing point.

Typical tubers of Gloriosa rothschildiana are shaped just like a V, an L or sometimes an I. Not infrequently, however, they are twisted or knotted, especially when grown in pots which do not afford room for full development.

Set a normal two-pronged tuber in the ground and you will observe a most interesting behavior. Although each arm of the tuber carries a bud at its end, only one will grow up into a plant. There are rare exceptions.

The other will develop underground into a knob-like tuber that may be used the next season. However, should the green stalk from the first bud be broken or destroyed while young, the “bud in reserve” on the tuber’s other arm will spring up as a replacement plant.

It has been learned that if tubers are cut in two at the junction of their arms before planting, the bud on each arm will then produce a plant. For this reason, commercial growers nearly always split their tubers. Those of blooming size, at least – and sell them in the form of straight, single arms. I also follow this practice of splitting the rootstocks to get extra dividends in flowering plants.

How Big Is “Blooming Size”?

The number of blooms on a glory lily seems to vary directly with the size of the tuber from which it grows. Some growers share that two-year-old tubers will flower. Perhaps that is true under very favorable conditions.

Last year, in an effort to determine the minimum “blooming size” for a Gloriosa rothschildiana tuber, I planted 25 two-year-old ones of fairly uniform size. Their arms ran 3 to 3 ½” inches long and ⅜” to ½” inch in diameter.

Part of them were split and part planted whole. Though they grew nicely and showed satisfactory increase in size when dug in the fall, not a single bloom appeared.

At the same time a group of slightly larger tubers – 3 ½” inches long and ⅝” inches thick – did flower dependably. Most of them producing plants with four blooms. A tuber 5 ½” inches long with an average diameter of about an inch sent up a fine stalk with two lateral branches, bearing twenty-two big flowers in all.

In connection with my remark about tubers growing larger during the season, probably I should explain that the tuber you dig in the fall is not the same one you planted in spring.

The original tuber shrivels and exhausts itself in making the summer growth, but a larger, stronger tuber should develop beneath it as a replacement.

My understanding is that in their native African habitat, glory lily stalks push up through the undergrowth. Then, well above ground, flowering branches trail off horizontally over the top of the brush.

This somewhat top-heavy habit of growth may be noted in gardens, too, when plants reach appreciable size. If near a fence or rough wall, they’ll handle the matter of support adequately by taking hold with their leaf tendrils. Otherwise stakes or a trellis of some sort should be provided.

Good In The Greenhouse

Besides being adapted to outdoor summer culture, Gloriosa rothschildiana is an excellent subject for growing in a greenhouse or a sunny conservatory.

Apparently it can be brought into flower at almost any time of the year. I saw one blooming on a Christmas day in the orchid house in Winter Park, Florida.

Far across the country in San Francisco’s Golden Gate Park, I found the familiar red and yellow blossoms featured in a conservatory flower display in mid-April. In June I observed them again blooming from potted tubers in a big glass house in Chicago.

While rothschildiana is the showiest, largest, and best known of the Gloriosa lilies, several other varieties can be found. Gloriosa superba and Gloriosa plantii, both of which are worth growing.

Flowers of Gloriosa superba are smaller than those of rothschildiana. But there are more of them and their petals are considerably more fluted and crisped along the edges. As I saw it in Florida and I have grown it in Tennessee, it has always blossomed in late summer, flowering in August and September.

Gloriosa plantii is nearer superba than rothschildiana, but to me appears weaker in growth and less floriferous than either. It differs as well in having thickened, rambling rootstocks rather than tubers like the other two species.

I’ve learned not to get discouraged in growing flowering bulbs. Sometimes all you need is bigger bulbs and the right growing location to learn “new tricks.”