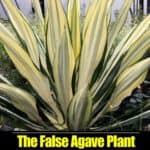 It hails from northern South America and the Caribbean. However, Furcraea is cultivated in several countries, including Thailand, India, Australia, Portugal, and many more.

It looks very much like a giant variegated Agave plant which earned it the common name of – False Agave plant.

However, Furcraea as other common names:

Furcraea foetida is also known by the synonym Furcraea gigantea.

The sword-shaped leaves have some sharp-edged pricks along the bottom of the plant which are about 0.5” to 1” long and are spaced widely apart.

In addition to this, it also has a number of large plantlets that are between 1” to 16” long.

When the plant flowers, it produces a large growing flower stalk reaching up to 20’ feet tall.

The plant blooms with flowers with a slight scented.

The flowers grow on the thick stem shooting from the middle of the plant and color ranges from green to white.

This is a light-loving plant and should be planted in an area where it can get plenty of sunlight.

When grown outdoors, choose a spot that gets full sun to light shade. If you are planting it indoors, make sure it’s near an east-facing or west-facing window.

Furcraea grows best in semi-humid environments and can tolerate temperatures as low as 25° degrees Fahrenheit.

The large root system in this plant makes it drought tolerant. Water it moderately during summers and the blooming season but after that, it requires only occasional watering.

Be very careful not to overwater as it can be very damaging for the plant.

To feed your Furcraea, use a controlled-release fertilizer at the start of the growing season.

Alternatively, you can use a diluted liquid solution.

Well-drained soil is a must for healthy growth. They usually prefer slightly acidic soil.

When repotting your plant, make sure that you have a pot large enough to contain this massive plant as it can grow quite big.

The soil should be absolutely dry before you plant. Make sure to take away any dead roots and knock off the old soil first.

Once you’ve transplanted Mauritius hemp, give it at least a week before watering to avoid chances of root rot.

Furcraea is a self-sufficient plant. Under the right conditions, it does not require a lot of pampering and is drought tolerant.

How to Propagate False Agave

Propagate Furcraea by using the small plantlets that appear at the bottom of the plant.

Separate and repot them in new containers and be careful of how much water you provide.

With the right light and growing conditions, the plant should begin to grow easily.

These plants are susceptible to a number of pests such as mites, aphids, and mealybugs.

Mites can be difficult to spot but they’re usually noticeable when the plant’s leaves will start to curl. Get rid of them by using insecticide soap.

Aphids are tiny, soft-bodied insects that can also be cleaned easily by washing the leaves or using insecticide soap.

Mealybugs are harder to get rid of. They can be identified by their small, cotton-like appearance on the plant. Apply Neem oil for control.

The Agave Snout Weevil will also burrow into the center of the plant.

This plant produces a large quantity of fiber, which is extracted from the plant and is used to make a number of products such as twine, cloth, mats, and ropes.

Thanks to its attractive appearance and unique flowers, it is also used widely as an ornamental plant and makes an attractive potted specimen in high light locations.