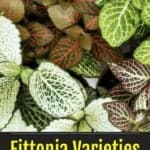 Fittonias are a small genus with only two accepted species, plus three other plants currently under review to see if they’re varieties or separate species.

Both Fittonia albivenis and Fittonia gigantea are native to Peru and have spread into adjacent regions.

These members of the Acanthaceae family were named after sister botanists Elizabeth and Sarah Mary Fitton and are popular houseplants, both for their trademark foliage and non-toxic nature. But are Fittonia plants safe for cats?

Of the two, Fittonia albivenis is the more popular indoor plant and has led to a wide range of cultivars, while Fittonia gigantea has a similar appearance but larger leaves.

The Fittonia nickname “nerve plant” is due to the prominent veins that stretch across the otherwise green leaves in pink, red, white, or yellow hues.

The plant of many names, Fittonia albivenis can be found online under many pseudonyms, including:

This plant is one of the two actual species of fittonia and is parent to most of the cultivars out there.

It produces small white to off-white flowers during the growing season and requires rich, loamy soil and bright, indirect to filtered sunlight to thrive.

All Fittonia albivenis cultivars break down into two separate groups: the Argyroneura Group and Verschaffeltii Group.

One of the varieties of Fittonia albivenis is hoping to become a species. Members of theFittonia Argyroneura group have light to dark green leaves with white, silver, or yellow veins.

This lightly variegated cultivar pairs bright green foliage with white veins that will put the competition to shame.

Add in the whitish splotches along the leaf margins, and you have a sure winner.

One of the most beautiful fittonia cultivars, ‘Frankie,’ has dark green foliage almost taken over by pink veins and variegation.

However, its true claim to fame is that this cultivar adapts to lower light conditions than most other Fittonias.

One of the most striking members of the Argyroneura Group, ‘Stripes Forever’ sports bold white veins on a dark green backdrop that almost look like stripes.

It’s commonly used in conjunction with two or more other Fittonias to tie them all together.

This is a smaller, more compact cultivar with oval to lanceolate leaves.

The greenish-white veins beautifully frame a background of medium to dark green.

It’s easy to mistake this cultivar for being nearly albino, as the creamy white of its veins are so bold that the dark green foliage is only truly apparent at the margins.

‘White Brocade’ is a good alternative for those who prefer a plant with the white veins of ‘Angel Snow’ but the heavier veining of ‘Juanita.’

In contrast to the Fittonia Argyroneura group, members of the Fittonia Verschaffeltii Group have pink to red veins, often on a darker green backdrop.

The dark emerald green tones of this cultivar’s arrowhead leaves alone can make it stand out.

But add in the heavy purplish-red veining, and you’ve got a sure winner on your hands.

This larger cultivar has round leaves with a simple vein pattern.

As a result, the leaves are mostly medium to dark green, with only the more prominent veins showing off their pink to red hues.

It’s popularly used in terrariums but is also a perfect compliment to ‘White Anne.’

One of the most striking Fittonias out there, ‘Red Star,’ has deep pinkish-red veins which form a stripe-like pattern across the dark green leaf surfaces.

Younger leaves tend to have so much red that the only green you see is in the margins until the leaf matures.

A more compact cultivar with lanceolate leaves, ‘Ruby Red’ earns its name by having equal amounts of deep red veins and a dark green backdrop.