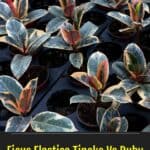 The Ficus genus may be most famous for fig trees, but the natural diversity of this 850 species group of plants can be quite surprising.

In addition to trees, there are also shrubs, vines, and epiphytes.

Many of these plants have become popular in homes and gardens, and plenty of cultivars are out there.

These two cultivars have a lot in common and some important differences.

As a result, you might find you prefer one over the other or decide to add both to your collection.

Differences Between ‘Ruby’ And ‘Tineke’

The differences between these two cultivars can be pretty striking, making them both well worth owning in their own rights.

‘Tineke’ has been around for a while now and is fairly easy to get hold of.

This also equates to a generally lower price tag.

On the other hand, ‘Ruby’ is still relatively new, making it harder to get hold of and relatively expensive compared to ‘Tineke.’

Over time, this difference should balance out, but it’s essential to know you might have to put a little more effort into getting hold of a ‘Ruby’ at this time.

These cultivars have protective sheaths that cover new growth and tend to grow from the main stem or secondary branches.

However, the sheaths take on a different appearance between the two plants.

The sheaths on ‘Ruby’ tend to be a deep, vivid shade of pink or red.

‘Tineke’ has more muted sheaths, which are green with a light pink tint.

When purchasing one of these plants from an online seller, paying attention to the sheath color is important, as this will often be the key identifier in younger plants.

Considering the price differences, finding a ‘Ruby’ that’s been mislabeled as ‘Tineke’ is great, but the opposite will cost you far too much.

This is the most apparent and striking difference between these two plants.

Both plants will show a pinkish tint to new leaves.

However, as the leaves mature, they begin to look quite different.

‘Ruby’ has variegated green and cream leaves that retain a deep pinkish to red tint.

Meanwhile, ‘Tineke’ loses its pink tones except for its veins.

Instead, the leaves mature into a variegated blend of dark green, light green, and cream.

Similarities Between ‘Tineke’ And ‘Ruby’

Despite their different appearances, these two cultivars have a lot in common.

This is actually a significant benefit, especially if you fail to catch the sheath color when buying one.

The care requirements for both of these plants are pretty much identical.

A common care mistake is a notion that these plants like low lighting.

In reality, the variegation means their leaves won’t photosynthesize as efficiently since the cream areas lack active chlorophyll cells.

Additionally, plants kept in mow lighting will lose their variegation as the plant begins activating chlorophyll cells to try and make up for the lack of light.

No matter which of these cultivars you choose, make sure they have bright, indirect sunlight so you can get the most out of their wonderful foliage.

Both cultivars share a weakness common in many houseplants. Namely, they will rarely—if ever—bloom indoors.

Grown outdoors in ideal settings, these plants may produce rather unremarkable flowers after about 10 years.

The flowers grow inside of small green fruits and are fertilized by fig wasps, so even if your plant manages to bloom, you probably won’t even notice!

Despite normally fast growth in rainforest settings, these plants tend to be relatively slow growers.

They tend to be single-stemmed, so you need to prune them to encourage branching.

In average conditions, these cultivars will reach a full indoor height of around 9′ feet tall and 2′ to 3′ feet wide in about 15 years.

However, it is more common for ‘Ruby’ to reach 2′ to 4′ feet tall and ‘Tineke’ to be 4′ to 6′ feet tall when grown indoors, simply because most growers don’t use precise climate controls to encourage fuller growth.

This is a stark contrast to natural conditions, where it’s estimated these cultivars (based on the parent plant) could reach a peak height of 100′ feet in only 13 years.

The leaves of both species are nearly identical, having an oval shape that comes to a point.

Each thick leaf can grow up to 12” inches long and has a waxy coating.

The leaves produce natural latex, which is believed to serve as a natural bandage when the leaves are damaged.

This latex can cause irritation or allergic reactions in sensitive individuals.

Both of these plants have a common parent – Ficus elastica, better known as the Indian rubber tree.

Oddly enough, the latex from this plant is no longer used to make rubber, with that honor going to the Pará rubber tree (Hevea brasiliensis).

So Which Is Better?

Because of how closely related ‘Tineke’ and ‘Ruby’ are, the only factors that will affect which you should get (if you can only buy one) come down to are the price tag and aesthetic preferences.

‘Tineke’ is cheaper and easier to find, and it does boast some lovely pink tones on the younger leaves.

However, these pink hues will disappear as the leaves mature, resulting in tri-toned variegation that’s still quite lovely.

On the other side of the coin, you have to be careful when purchasing a ‘Ruby’ from online sellers, as they often get the two plants confused if they’re young.

Thankfully, you can identify ‘Ruby’ by its redder sheaths, ensuring you don’t bring home a young ‘Tineke’ by accident.

This cultivar is harder to find and more expensive but is well worth it if you want a plant that retains the pink to red hues in its foliage.