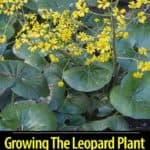 The leopard plant is a species of herbaceous perennial flowering plants belonging to the family Asteraceae.

… Farfugium japonicum is cultivated as an ornamental plant.

Use them in both gardens and pots to brighten up shaded gardening areas.

The small bright flowers and shiny leaves create a striking contrast and look very pretty planted among other flowering plants.

You may hear it called by its common name including:

It is also known by the plant synonym Ligularia kaempferi.

Named varieties you may find include:

The Giant Leopard plant is grown for its striking glossy foliage and daisy-like flowers.

This choice container plant has a medium growth rate and sprouts in a loose clump about 24” inches tall and wide.

It spreads by rhizomes, creating a carpet of large green leaves often marked with yellow or cream-colored spots.

It is an evergreen perennial, meaning it stays in leaf all year long.

It is a hermaphrodite, meaning it contains both male and female organs.

Bees and other insects pollinate the plant, spreading its growth.

Besides the attractive foliage of large leaves, Leopard plants are also appreciated for their tiny yellow flowers.

The yellow daisy-like flowers bloom in the fall and winter and are borne in loose clusters.

Each of the yellow daisy flowers are about 1”-2” inches across and looks pretty elevated above the shiny green leaves.

Farfugium japonicum var giganteum are hardy to USDA hardiness zones 7 to 9 growing well in a variety of growing conditions and locations.

When it comes to light, Leopard plants tend to prosper in light shade to full shade areas such as shade gardens.

Although they can grow in full sun, leopard plants are highly susceptible to wilting on very bright sunny days when they are planted without any light shade.

As for temperature, the plant is not considered too hardy and doesn’t tolerate below freezing or very high temperatures.

If you live in an area where winters are harsh, bring your Gigantea inside or plant it in a container during the colder months to ensure its survival.

This is because, in their native habitat, they are most commonly found near streams and coastal areas.

Make sure to keep a close eye on the soil and keep it moist, especially during the hot late summers.

Avoid both overwatering and letting the soil dry out completely.

Both extremes can cause damage, implicating the plant’s health and survival.

The plants also need fertile soil to prosper, so make sure to feed the plants regularly but don’t overdo it.

Provided it has good drainage, use sandy, loamy, and clay soils for planting Ligularia tussilaginea.

When you propagate Leopard plants with seeds, you’ll be starting them in pots placed inside a greenhouse.

When the plants have established, plant them in their permanent locations in the ground or bigger pots.

The suitable time for transplanting the plants is in late spring or early summer.

Use well-drained, moist and humus-rich soil to plant Farfugium japonicum in a semi-shaded location.

You don’t necessarily need to prune them or do much to keep them healthy and thriving.

The one thing you need to be careful about is watering and lighting.

If you have a particularly sunny and hot summer ad your Leopard plant is located in full sun, add shade to avoid wilting.

Also, keep the soil moist at all times as the plant doesn’t respond well to dry soil.

How to Propagate Leopard Plant

Propagate leopard plants from seeds and by the division of the root ball.

If you’re using seeds for propagation, sow them in a cold frame during springtime.

Once the plants have grown large enough to handle, prick the seedlings and transplant them into individual pots.

Keep them inside in a greenhouse during the first winter, planting them outside once the last spring frosts have passed in late spring or early summer.

Division is done in the spring. Simply divide the root ball or take offsets, planting them in individual pots for the coming winter.

Leopard plants are susceptible to common plant pests and diseases. The most common pest being slug attacks.

Use food grade Diatomaceous earth insecticide for control. Consult your local gardening center for other methods of getting rid of slugs.

In some areas, the stems of the Leopard plants have edible uses.

The stems are boiled in water to remove the bitter taste.

The outer layer is then peeled, and the stems are added in salads and soups, etc.

Other than this, Leopard plants are used mainly for their beauty.