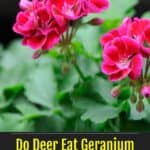 There are a lot of pests that can make a mess in your garden. Some drain the sap from your leaves, and others chew them up. Some even devour the roots, killing your plants from the ground up.

Of these many pests, deer are one of the ones that some people might never encounter while others deal with them throughout the growing season.

So what do you do if you want to grow geraniums in a location where deer are common?

The good news is that deer aren’t huge fans of geraniums. However, they’ll still go after your geranium plants under certain circumstances.

Geraniums have several qualities deer don’t like. The scent of geraniums is powerful to their sensitive noses.

Meanwhile, the taste of geraniums can be very bitter and even toxic, plus the fuzzy texture feels unpleasant when ingested.

They’re especially reluctant to eat geraniums during the spring and summer when wide varieties of geraniums focus on growth.

When Will Deer Eat Geraniums?

While it’s true deer won’t go after geraniums under normal circumstances, there are some occasions when they go after them.

For example, deer will munch on your geranium if other food sources are scarce. They’ll also go after your geraniums if you’re using them as a barrier to much tastier plants.

In cooler months, when most plants are either in bloom or have finished blooming, plants (including geraniums) are more susceptible to deer attacks.

If you aren’t willing to risk our prized geraniums becoming a prized lunch, you can do a few things to help keep the deer away.

The following methods are just a sampling of what you can do and are selected because they won’t harm your garden.

Companion planting (sometimes called complementary gardening) is the practice of grouping plants that benefit the others in the group.

For example, some companion plants may repel pests or attract pollinators, while others can actually improve the health of certain other plants or combat weeds or diseases.

In the case of geraniums, you’ll want to use other plants that also repel deer, making your garden as unattractive to them as it is attractive to you.

Some great anti-deer companion plants are:

We also suggest strong-scented herbs such as:

Not to mention terrible-tasting (but attractive) flowers such as:

Just keep in mind deer will still attack most of these plants if there are few other options.

This traditional Japanese deterrent can annoy neighbors, so talk to them before installing one.

The best option is to build a small water feature with a pond and a water pump (or little water wheel) to scoop water up.

The water then flows through a bamboo pipe into another piece of bamboo sealed at the back and attached to a pivot.

As the second piece of bamboo fills, the water causes it to tip down, smacking a large rock, creating a soothing thunk sound, and spilling its water back into the pond before swinging back up to repeat the process.

Deer chasers can be tuned to strike at the minute or other intervals, making them helpful in scaring off critters, telling time, and being almost meditative.

Depending on local ordinances, fencing may or may not be a good option. This is because a deer can jump 6′ feet with little effort, meaning any fence must be 8′ feet high.

These can include a wooden privacy fence, electric fence, or double barrier fence where two fences are placed close enough together that the deer can’t comfortably land and jump again between them – yet far enough apart that they can’t simply vault over both at once.

We could spend a long time discussing various repellents and decoys, but two that tend to work well are dog fur and wolf or coyote urine crystals.

Sprinkle one or more of these around the perimeter of your yard to make the deer think there are predator animals nearby.

The major downside to these repellents is that you will have to reapply them when it rains or every few days.

On a similar note, you can make sprays using garlic or essential oils and spray these around the perimeter of your yard or garden.

Much like the previous repellents, these will need to be reapplied periodically or if it rains.

However, they can be useful if it’s too late in the season to plant mint or other repellent herbs or alliums, but you want similar effects.

Can Geraniums Recover From Deer Attacks?

The survivability of your geraniums will depend largely upon the type.

Pelargoniums can thrive when attacked, as they’re well-known for enjoying good pruning and will often bounce back even better.

Perennial geraniums are far more fragile and, while they can recover from some degree of damage, will die if that damage is severe.

As for annual geraniums, there’s a much smaller chance of recovery, but it’s also not as big of a loss since these will have to be replanted each year, regardless.