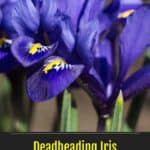 There are an estimated 260 to 300 species in the Iris (EYE-ris) genus, not to mention countless cultivars.

As a result, one iris plant may have a different shape, size, or flower type from the next, and it can make caring for your irises a little tricky until you get the hang of their varied needs.

But there’s one particular topic that often comes up: deadheading.

Deadheading is the process of removing a spent flower to help the plant conserve resources and encourage further blooms.

When done correctly, supporters of this method claim the plants will produce fuller, longer blooming periods.

But what about irises?

How To Deadhead Irises?

Deadheading irises is as simple as pinching off spent flowers.

However, there are a few things you should know before doing so.

Should You Deadhead Irises? Is It Even Necessary?

“Do you deadhead irises” is a popular question of debate among plant enthusiasts.

As with other flowering plants, some say it’s necessary, others say it’s a waste of time, and yet others believe the answer is somewhere in the middle.

Whether or not you choose to deadhead an iris is thus up to personal preference.

When To Deadhead Irises

You will want only to remove flowers that have begun to fade or wither.

Not all irises will produce multiple blooms, but bearded Iris varieties and reblooming irises can benefit from deadheading.

The process will encourage further blooming throughout the season and make the plant look more attractive.

When NOT To Deadhead Iris

There’s little point in deadheading an iris that can only bloom once per year.

Additionally, if you wish to grow an iris from seed, you’ll have to leave the flowers of the parent plant alone. It will give them a chance to form seed pods and mature for harvesting.

As mentioned before, the actual process of deadheading is quite simple.

Pinch the base of the spent flower, and it will easily break off in your hand.

Be careful not to harm nearby flowers, as some irises can grow blooms quite close together.

There’s no set timeframe for when you should deadhead as long as you’re only removing the
spent flowers.

Should You Remove the Stalk After Deadheading?

Removing the stalk is another aspect of deadheading irises open for debate. However, it isn’t the same as deadheading the flowers themselves.

Arguments for Removing the Stalk

Those who support removing the stalk state a couple of reasons it’s a good idea.

The most obvious reason is for a better appearance, as your iris will look a little strange with an empty stalk protruding from the leaves.

Another reason commonly cited is the higher risk of the empty stalk developing rot or disease.

Reblooming irises will often develop new flowers in new stalks, and also the old empty stalks of irises can be removed without preventing more blooms.

Arguments Against Removing the Stalk

The opposing camp claims no significant increase in Iris disease risk from leaving the stalk intact.

Instead, they argue that the extra green surface of the stalk aids in photosynthesis and allows the plant to better prepare for winter.

As with the matter of deadheading itself, there’s no clear answer as to whether removing the stalk is even necessary.

Instead, use your judgment to decide if the empty stalks should stay or go.

How to Remove the Stalk

If you choose to remove a stalk, make sure no new flowers are forming, and all of the existing flowers are spent.

You will want to cut the stalk close to the rhizome or ground level. Using a pair of sharp, sterile scissors or a knife, cut the stalk off at a 45° degree angle.

Never attempt to snap the stalk off, as this may damage the rhizome or leave the plant open for infection.

Also, it’s best to remove the stalk when the weather’s warm and clear so the wound has a chance to scab over.

Be careful not to remove any of the leaves, as it will still be needed to build up energy stores for the winter.