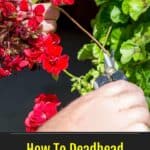 Dealing with geraniums can get complicated quite fast if you don’t specify whether you’re talking about Geranium (jer-AY-nee-um) or Pelargonium (pe-lar-GO-nee-um).

The two genera, which were separated in 1789, are both commonly known as geraniums to this day.

Yet, due to their higher tolerance of cold and other conditions, true geraniums are often also called hardy geraniums.

While all geraniums share some common ground, the differences between true geraniums and pelargoniums can be important.

And the differences in the rules for and reactions to the process of deadheading are clear.

How To Deadhead Geraniums?

Deadheading can be helpful for pelargoniums like Martha Washington types but not so much for geraniums.

Here’s everything you need to know about when, how, and why for each genus.

As mentioned, deadheading a true geranium (sometimes called cranesbills) isn’t all that effective.

Instead, it’s a practice used for aesthetic purposes.

If you wish to deadhead for a more attractive cranesbill, you can do the following:

Or, you can wait until autumn when you prune the entire plant back to its basal growth.

All pelargoniums enjoy deadheading. Not only does it make the plant look better, but pelargoniums frequently bloom throughout the growing season.

By getting rid of the spent heads, you provide more resources for the plant to produce new blooms.

When to deadhead is a matter of minor debate, and you can choose which timing best suits your personal preferences.

More casual gardeners will usually deadhead when the petals begin to show signs of browning.

A more aggressive gardener may deadhead as soon as the flower begins to show signs of weakness or wilting.

For most plants, deadheading means pinching off the flowerheads.

Why Deadhead The Stems?

Deadheading is a means of conserving energy.

Creating and maintaining a bloom can be a lot like pregnancy. Food, air, and water divert the plant’s reproductive organs (i.e., the flower and its stamens).

The plant will continue to send resources to the flower until it falls off.

Once the flowerhead is gone, the plant will move its resources to produce a new flower somewhere else.

But what makes pelargoniums a little more unique is that pinching the stems will cause new growth to appear, thickening out the plant.

By cutting the flower’s stem, the plant will grow a new, healthier branch in its place that can then form a fresh flower.

Best of all, it only takes a few days for the plant to grow enough stem for a new bud. That extra bit of pruning doesn’t slow the process down at all.

No conversation about deadheading is complete without addressing the debate on its necessity.

A plant that blooms many times will do so regardless of whether you deadhead it.

Yet, you’ll get more vibrant blooms on many plants if you practice deadheading.

There’s no real benefit to deadheading with hardy geraniums. But pelargoniums will usually appreciate the help.

It’s also worth considering the species or cultivar you’re growing.

A plant that only blooms once per year won’t get much out of deadheading. Yet one that produces continuous blooms will thrive from the attention.

Finally, keep in mind the time of year, as late summer blooms will likely be the last for the year. Deadheading them won’t be of much use.

Instead, it’s often best to leave them until you’re ready to prune the plant back for the winter (if growing as a perennial).