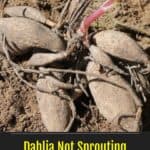 After planting your dahlia tubers, it’s not unusual for it to seem as if they are not sprouting. It can take a month, or even six weeks, for freshly planted tubers to begin to sprout.

This is especially true if you plant them outdoors very early in the springtime when the weather is not yet consistently warm. It just takes a little longer for the tubers to wake up and start growing in the cold ground.

Even though it is possible to buy dahlia tubers early in the springtime, or even during the winter, it’s not a good idea to plant them when the soil is still cold.

It’s best to plant your tubers late in the spring or early in the summer. When the soil is consistently 60° degrees Fahrenheit or higher the tubers will yield a good crop of flowers.

Even if you plant at the right time, your dahlia tubers may sprout late if they are not getting enough direct sunlight. Be sure to choose a location that receives direct sunlight for half the day.

Poor soil and too much water can also inhibit sprouting. Dahlias need loose, airy, fertile, well-draining soil. Be sure to mix lots of organic compost into your soil before planting your tubers.

Never let them stand in water. This will cause rot and will kill the tubers before they ever have a chance to sprout.

If you purchase tubers during the winter or early in the spring, and you may want to get them started right away, try potting them. Place each tuber in a gallon-sized pot with a light, airy potting mix. Learn more about growing Dahlia plants in pots.

Dampen the soil and place the containers in an area that receives consistent warmth and bright, indirect sunlight. In most cases, you will not need to water again until you see sprouts peeking through the soil.

If the air is very dry, you may need to keep the soil slightly moist until you are ready to transplant your dahlias to their outdoor setting.

You can also pre-sprout your dahlia tubers by simply moving them out of cold storage. Place them into an area with constant temperatures of about 55° degrees Fahrenheit, late in the winter or early in the spring.

Keep them in the storing medium you have used to protect them through the winter (i.e., peat moss). You may need to moisten it from time to time to prevent the tubers from drying out.

Be very stingy with the watering Dahlias, though. Too much will cause your tubers to rot and die. You want to keep the tubers from shriveling up, but this may not happen at all if there is a reasonable amount of moisture in the air.

You needn’t give them fertilizer during the pre-sprouting period if you use well-amended soil with rich, organic compost. Also, drop a small scoop of bone meal into each hole before planting your tubers.

Your dahlia tubers will behave like potatoes and begin sprouting from “eyes,” typically found at the crown of each tuber. If there is no eye, the tuber will not germinate.

It can be tough to see the eyes, so don’t discard tubers that seem not to have them. Be patient; with warmth and a little moisture, you may soon see a little lump developing on the neck or near the crown of the tuber.

Well-Stored Dahlia Tubers May Sprout On Their Own

Sometimes, when you take your dahlia tubers out of cold storage, you may find that they are already starting to sprout. This can mean that they’ve been a bit too warm. The ideal cold storage temperature is about 40° degrees Fahrenheit.

It may also show that the tubers were ready to sprout and grow. If it’s late in the spring, this is probably the case. Both temperature and the passage of time influence sprouting behavior.

You may find that your tubers have sprouted and it’s not warm enough to put them outside. Put them in pots and let them grow until you are ready to plant them out in the springtime.