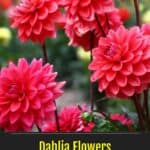 Originally exclusive to Central America, the dahlia (DAL-ee-a) has become one of the most diverse and iconic plants in the world.

These members of the Asteraceae family include only 42 species, but over 57,000 registered cultivars.

As a result, there’s so much diversity that several different systems have been proposed to sort out the various types of dahlia.

Today, the official classification system is that of the Royal Horticultural Society (RHS), which divides all dahlias types into 14 groups based on flower descriptions.

However, some other systems such as the overly complex one by the American Dahlia Society (ADS) have persisted.

Dahlias are not difficult to care for and, despite being such a varied group of plants, all have essentially the same care requirements.

Depending on the species or cultivar you choose, these plants may be perennial, annual, or both (depending on your location).

There’s a lot of size variation among dahlia plants, with sizes ranging from a mere 12” inches to over 8’ feet tall.

They all have tuberous roots and attractive foliage that can range in color.

Generally fast growers, dahlias usually have herbaceous stems, allowing them to be pinched early on to encourage thicker growth habits.

This is where the dahlia gets complicated.

These plants have complex blooms which may be layered, single layers with a central disc, or almost globe-like in shape.

The “petals” of these blooms are actually florets, meaning the so-called petals in both the rays and discs are technically florets or tiny flowers in their own right.

This is something seen in many plants, such as the common red clover, and is known as composite flowers.

However, even professionals tend to refer to the florets as simply “petals”.

Dahlia blooms come in a wide range of colors naturally, with blue being the only exception among its 42 main species.

Most of these flowers are unscented, although some cultivars have been bred for scent.

Likewise, most dahlias are of no interest to pollinators, but some cultivars will attract them.

While the RHS focuses exclusively on bloom structure for its system, others (such as the ADS system) also separate the plants by bloom color and size.

As a result, you’ll often see unofficial terms such as “dinnerplate” (describing blooms 8” inches or larger) being used by nurseries and growers.

Dahlias are deciduous, meaning they die back at first frost and grow fresh foliage in the spring.

However, in colder climates, the rhizomes will need to be dug up and transplanted indoors to overwinter due to their frost sensitivity.

Dahlias tend to prefer full sun in the morning and do best with 6 to 8 hours of direct sunlight per day.

In the hottest regions, they may prefer a little afternoon dappled sunlight or partial shade.

However, too much shade will reduce the blooms and lead to fungal issues.

Dahlias have a wide range in which they can grow, with USDA hardiness zones 8 to 12 being the best for perennial growth.

However, they may be grown as annuals in zones 6 to 7 or uprooted in the fall and overwintered indoors.

When growing Dahlias be aware they can be sensitive to overwatering and too much soil moisture, and often only need to be watered during a drought or in arid regions.

A good rule of thumb is to water when the soil feels dry to the touch (or 1” inch down), or there was less than 1” inch of rainfall for the week.

These plants are fairly heavy feeders, but it’s important to get your soil tested prior to planting, as this will greatly affect the NPK ratios you’ll need.

For example, a soil showing more than 500ppm of phosphorus will need a lower phosphorus mix, as too much phosphorus in the soil can actually lead to a potassium deficiency.

Likewise, the rain naturally replenishes some nitrogen in the soil, which leeches out easily, so many growers prefer half as much nitrogen as other nutrients while others in drier religions will aim for a balanced fertilizer.

Nitrogen encourages leaf and stem growth, phosphorus is best for blooms, and potassium is needed for the plant’s general health.

As a result, many growers prefer to use a balanced fertilizer throughout spring and switch to a fertilizer with half the nitrogen once blooms begin to appear.

Fresh dahlia tubers don’t need feeding for 30 days after planting. As a general rule, you’ll only need to add fertilizer monthly in spring and summer, stopping in fall.

Always follow the instructions on the package, whether you use fish fertilizer, slow-release fertilizer, or liquid one.

Most dahlias prefer a slightly acidic pH of 6.5 to 7.0, although some cultivars enjoy a pH as low as 6.0.

The clump of tubers do best in sandy to loamy, well-drained soils.

However, you can amend clay soil with coarse sand or perlite and organic compost to make it suitable for dahlias to grow in.

When you plant Dahlias, the tubers should be planted so the soil level is 2″ to 4” inches higher than the top of the tuber.

NOTE: Hold off on watering until sprouts appear in 4-5 weeks.

If you’re in a cooler climate, cut back the plant to just above soil level when frost sets in and dig up the roots to take indoors for winter storage.

Some growers like to let the tubers harden a little before digging them up, but this is best done in an area where the soil isn’t too damp and it’s not too cold.

Note that it’s possible to grow dahlias of any size or type in containers, which allows you to avoid annual uprooting.

One of the most important things you can do for your dahlia is to prune away its lowest branches by as much as 1’ foot from the soil level for the tallest cultivars.

This encourages better airflow and greatly reduces the risk of fungal infections to both the plant and soil.

You’ll also want to apply a thick layer of mulch occasionally, especially if you plan to overwinter the tubers outdoors in warmer climates.

While it’s not uncommon for growers to deadhead their dahlias, this practice isn’t essential and tends to be more a matter of personal preference.

How To Propagate Dahlias?

Stem cuttings and rhizome division are both easy and effective means to propagate any dahlia.

While they can also be propagated by seed, you should avoid this if you have a cultivar, since the seeds will not be clones and likely produce the parent plant instead.

Deer are not particularly interested in dahlias but are known to eat them if there’s nothing more palatable in the area.

As a result, you may wish to plant some sacrificial plants or deer-proof your dahlias.

The usual suspects, such as aphids, mealybugs, snails and slugs, spider mites, and thrips can all be a problem, as are earwigs.

Be especially careful of thrips, as they may infect the plant with a mosaic virus, an incurable disease that will lead to deformities in your dahlia.

Speaking of diseases, root rot is the biggest threat, but dahlias are known to catch a range of fungal issues such as powdery mildew.

While not good for pets, both the flowers and tubers of dahlias are edible to humans.

The wide range of shapes and sizes means dahlias look good just about anywhere you put them.