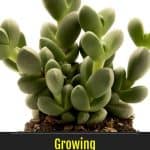 The species is currently threatened in its native region due to invasive species and habitat degradation.

The plant belongs to the Aizoaceae (fig-marigold) family.

Corpuscularia lehmannii is commonly called along with many others the ice plant.

The common name “ice plant” is used for most species in the Aizoaceae family.

The flowers of these plants tend to have small particles resembling ice crystals or frost.

The ice plant may reach up to 12″ inches tall and wide. It produces thick leaves growing in opposite pairs.

The thick, succulent leaves are blueish-green to light green.

The leaves grow on long shoots and measure about 1″ inch long.

The plant has small yellow flowers growing from stalks.

The stalks contain several flowers, each measuring less than an inch.

The petals are slightly translucent.

Place the plant in an area with full sun.

It survives winters in USDA hardiness zones 9A to 11, requiring a minimum temperature of 41° degrees Fahrenheit (5° C). The soil should dry out more quickly compared to standard garden soil.

How to Propagate Ice Plant Succulent

Propagate the ice plant with cuttings or seeds.

NOTE: Collect the cuttings any time of the year other than winter.

Before sowing the seeds, prepare small pots or seed starter trays with a moistened succulent mix.

The main concerns are fungal growth or rot due to overwatering or excess humidity.

If the plant receives too much moisture, the leaves may develop spots.

Gray or white webbing may also appear around the base of the plant.

Infected plants should be removed from succulent gardens to protect other plants.

Propagation is the best way to try saving the plant.

The soil around the plant should also be discarded.

Corpuscularia lehmannii is compact and rarely exceeds 12″ inches in height, making it a good choice for a succulent garden.

The striking display of leaves also looks great on its own in a small pot.