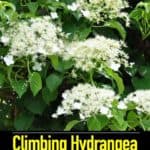 The climbing Hydrangea is a woody, vine species of hydrangea belonging to the Hydrangeaceae family. The plant is native to Japan, Siberia, and the Korean peninsula.

The former has variegated leaves while the latter has leaves that are shaped like hearts.

Climbing hydrangeas are popular plants because of the beauty they add to any landscape especially in the winter interest provided with their exfoliating bark and easy-to-care-for nature.

The plant has several synonyms:

Hydrangea anomala is related to the H. macrophylla the Garden Hydrangea. However, it’s climbing growth habit puts anomala in a class of its own.

Hydrangea petiolaris is characterized by dark bark that has little branchlets growing out from the sides of the structure with oval leaves about 2” to 4” long with small toothed edges.

The dark green leaves change color throughout the season beginning with dark green foliage and morphing into a lighter yellow as the fall approaches.

Climbing hydrangeas have a slow growth rate for the initial three to five years but once established, can pick up speed.

It has a vine-like growth pattern and can grow up to about 30’ to 50’ feet tall when fully mature with a width of about 5’ to 6’ feet.

Young plants make excellent potted patio specimens. Climbing Hydrangea plants growing in containers are easily maintained to heights of 8′ or 9′ feet, even after many years.

This plant is hardy to grow in USDA hardiness zones 4 to 7.

With proper support, Hydrangea petiolaris forms clinging aerial rootlets like ivy does along its stems.

However, when young it is important to train the stems early to initially fasten the plant to the supporting structure.

Give plants a sturdy trellis, tie to a wall or other a strong support to grow on. An east or west facing wall is a good choice.

Sooner or later, these plants adorn itself with large flower heads of lightly fragrant white flower clusters up to 8′ inches in size, usually appearing in early summer.

These clusters of white flowers consist of two types of flowers which together form what is called the “lacecap” effect.

Around the cluster edge is large, conspicuous but infertile flowers with showy white sepals designed to attract insects.

In the middle of the cluster are the actual greenish white and rather inconspicuous fertile flowers.

In the wild, after fertilization, the flowers form seed capsules with brown wings.

Unlike most flowering vines, climbing hydrangeas can tolerate partial shade. However, they will flourish best when planted in full sun.

However, they will also survive on four to six hours of afternoon shade.

This plant is not fond of hot, humid temperatures. If the daytime temperature exceeds 70° degrees Fahrenheit during the day, it can be at risk of getting burned.

In order for the plant to set buds, it requires a steady temperature of 65° degrees Fahrenheit for a period of six weeks.

Climbing hydrangeas are also not very frost hardy and can be damaged if exposed to frost.

Make sure plants are watered evenly on a regular basis, enough to keep the soil moist.

Plants should be fed in early spring with a high phosphorous granular fertilizer.

This will encourage better blooms. You should use a fertilizer for Hydrangeas again after blooming during the summer.

The same kind of acidic soil Azaleas and Rhododendrons appreciate.

Do not put the Climbing Hydrangea in normal planting soil without mixing in a generous quantity of peat moss.

In order to help keep moisture around the roots, apply a layer of mulch.

Once plants become established, they will begin to grow faster and will require consistent pruning to keep it in shape.

How to Propagate Flowering Hydrangea Vine

You can propagate climbing hydrangeas by seeds or cuttings.

If using cuttings, make sure you’ve got a sharp, clean pruner.

Cut off a shoot, being careful to cut as low as possible. Plant the cutting in a pot with plenty of potting soil and proper drainage.

Keep the pot in a shady spot and keep the soil moist until the plant begins to take root.

When growing from seeds, make sure you collect seed capsules in September and October.

Dry the seeds for about two weeks after which you should crush them so the seeds are more visible.

Once you’ve got your seeds, store them until it’s time to plant them in winter.

Sow the seeds on top of the potting mix and cover the pot or container with plastic wrap.

Place the container in a room with a temperature ranging from 65° to 70° degrees Fahrenheit.

It will take about 18 days or so for the seeds to germinate.

However,  aphids can show up in the summer, mainly on the tips of young new growth. Try washing the aphids off with a strong spray of water from the garden hose. Repeat as needed if they persist.

Chlorosis is indicated by yellow areas between the veins on the leaves. Chlorosis is caused by iron deficiency due to alkaline water and/or soil.

Cure this by watering with an iron chelate solution specially formulated to treat chlorosis. More on plants and iron deficiency

Small leaves and stunted growth usually is a result of too much calcium. Repot into a potting soil mix containing peat moss. Use purified water when watering.

Drooping leaves signal of too little water. Climbing Hydrangea needs lots of water, especially during the growing season in spring and summer.

Lack of flowers is normal in young plants. Climbing Hydrangeas only flower after being several years old, even with the best care.

Climbing hydrangea vines are versatile and can be grown either upwards along stone walls, fences, houses, large trees, and a number of other supporting structures.

They are perfect for covering large areas in full sun.

They can also be pruned down to grow as ground cover and are ideal for the patio on a large trellis.