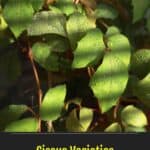 Hailing from the grape (Vitaceae) family, Cissus is a genus of approximately 350 lianas (or woody vines).

Their name, which translates to “ivy” pays homage to the fact that these were actually considered part of the ivy (Hedera) genus until the 1980s when differences in the flowers led to reclassification.

Found mostly in tropical regions, Cissus species have a global distribution that has only gotten larger due to domestic use.

These wonderful vining specimen plants are quite popular in gardens where they are often grown on trellises and other support structures.

While considered non-toxic to humans and pets by some organizations such as the ASPCA, the FDA considers them toxic, leading to some confusion on how safe these plants are.

Indoors, they can make for very popular container plants and are a bit easier to control.

Many species have also been studied for medical application and have been used in traditional medicine.

The following species, varieties, and cultivars are some of the most popular types of Cissus varieties currently available, but only represent a small portion of the plants available.

With even more cultivars in development, these wonderful plants are sure to please fans of vines who want something less toxic than ivy.

One of many Cissus species that have different scientific names employed by botanists and cultivators, Cissus rhombifolia (as most will know it as)  is easily identified by a unique feature of its leaves.

The shiny tripart leaves are opposed by a unique forked tendril and make a wonderful statement whether you choose to let the vine climb or cascade.

Able to handle medium light and poor soil conditions, this is an excellent choice for beginners and is also often used in creating cultivars.

The speartip-shaped leaves on Cissus Amazonica a Brazilian cissus make it an instant winner.

The tops of the leaves are frosted green with cream veins while the undersides may be burgundy, pink, or red.

This wonderful cultivar is perfect for fans of trailing plants and can give spider plants a run or their money.

Its divided leaves are highly textured and glossy, creating a wonderful cascade of green when kept in hanging baskets.

Sometimes referred to as Cissus oblongata, the kangaroo plant is actually from Australia, despite the name, and has shiny, serrated oval to arrowhead shaped leaves.

During the growth period, it enjoys temperatures of 61 to 75° degrees Fahrenheit and can handle a wide range of lighting, making it perfect for more northern climates.

This African native is a larger sibling to Cissus quadrangularis and bears the same succulent-like appearance and sparse foliage.

As the appearance suggests, it needs far less moisture than many of its sister species.

There is some evidence to suggest the cactus vine and veldt vine sometimes cross to create new hybrids in the wild.

Nicknamed for its begonia-like foliage, Cissus discolor is one of the more striking species of Cissus out there.

The tops of the leaves are a variegated blend of green, silver, and purple, while the undersides range from burgundy to purple.

This native of Java needs a fair amount of light due to its variegation, but is otherwise easy to care for when grown in containers.

Featuring a more shrub-like habit and deeply lobed leaves, this cultivar of Cissus rhombifolia is perfect for hanging baskets and shelf-top containers.

Due to its lobes, ‘Ellen Danica’ sometimes goes by the nickname oak leaf ivy.

This Australian native gets its name from the drinkable watery sap that drips out when the vine is cut.

It has reddish leaves that mature to green and grow in groups of five.

Due to its more upright growth, this Cissus rhombifolia cultivar positively thrives on a trellis but is poorly suited for hanging baskets.

The cultivar is available as both a full-size version and a compact version that can be grown in smaller spaces.

Native to Southwest Asia and much of Africa, Cissus quadtangularis is an Arabian species is sometimes referred to as an adamant creeper or devil’s backbone as well as a whole host of alternate scientific names.

It’s a very unusual cissus, as the segmented vines and sparse leaves make it look more like a succulent than a vine.

The plant not only makes for a unique statement, but it can grow in almost any soil, including very poor soils.

This species is used in both traditional medicine and modern medical research.

As a houseplant, it needs good lighting but is otherwise easy to care for.

One of the more sun-loving species of Cissus, the actual botanical name for this species is Cissus verticillata, but plant shops generally market it as Cissus sicyoides.

The plant’s tiny, delicate tendrils have led to its nickname, while the bright green heart-shaped leaves of this Mexican beauty are sure to please.

The plant has some medicinal uses in traditional medicine and the roots were at one point exported to Europe as medical stock.

If you’re one of those people who believe size is overrated, the Cissus striata is a true winner.

It has small oval leaves that form in star-shaped groups and the vine gains a reddish tint as it ages.

Native to Chile and found in surrounding regions, this plant is a wonderful addition to hanging baskets and bookshelves.