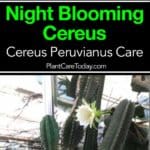 Having plants indoors and giving them the humidity they would really like is another.

It’s great when you can find a plant that doesn’t mind the low humidity, likes it on the dry side, and takes up little space.

What plant am I talking about? The Cereus peruvianus (Cereus repandus)

The Peruvian apple cactus, also known as the Cereus repandus, picks up the common name, because of its 1″-2″- inch fleshy, apple-like red fruit.

You’ll find the cereus cactus plant grown normally for use indoors as multiple “cuttings” planted in various heights, such as a 2′ and 3′-foot trunk planted in a 10″-inch container.

Larger pots of the columnar Peruvian apple cactus are grown in 14″ and 17″-inch and planted with 3 or 4 of the columnar trunks of different lengths reaching a height of 4′-6′ feet and occasionally taller.

The stems or trunks have a gray-green coloring along with 6 to 8 vertical ribs. When the flowers emerge they are typically 2″-4″- inches and white.

The Cereus peruvianus is a very upright blooming cactus plant and is used mainly as a floor plant.

Taking smaller plants, elevating them, and combining some unique pottery or containers can create some very interesting effects and looks… sort of like “living art”.

Many people think from the start that since the plant is a cactus or in the cactus family (like the Opuntia prickly pear) it shouldn’t be watered or it only needs a little. In the watering department, it wants to be watered well.

Peruvian apple cactus plants want what most cacti like:

This plant is a perfect candidate for sunny south, east or west windows.

The Peruvian apple cactus can handle low light levels but thrives during the summer months in bright light.

Popular Cactus species of this plant family include:

Cereus Hildmannianus monstrose – a species found in South America in the countries if Paraguay, Uruguay, Argentina, and Brazil. It can grow up to 33′ feet and bear white flowers.

Cereus Jamacandu – also known as the mandacaru or cardeiro. It’s usually found in Northeast Brazil and grows up to 20 feet tall.

Cereus Tetragonus – a species also belonging to the family Cactaceae, native to North America. These grow as tall plants and should not be confused with a fairytale castle, a dwarf and common succulent.

If your Peruvian apple cactus plant is placed in high or bright lighting, allow the plant to dry out between waterings.

When the column cereus care involves maintaining plants’ lower light levels the soil should be allowed to dry out to about 75% percent.

Don’t just look at the soil. Make sure that the blades and stems are soft and spongy before you water.

Do not allow the apple cactus Cereus to sit in water. If your plant is being overwatered it may have yellowing stems or blades, mushy stems, root rot, or smell funny.

The most common pest for Peruvian apple cactus is easy to control plant scale and an occasional mealybug outbreak.

When transporting the plants, watch out for the typical cactus spines on your hands, clothes, and vehicle.

I should also point out that because of the spines the Cereus may not be the best choice for people with young children.

Most growers wrap the extra paper around the stems to protect people as well as the other stems from being pierced in shipping.

Like the candelabra Euphorbia cactus (learn African Milk Tree care) you may be surprised at how heavy a Cereus peruvianus is.

This is because of the amount of water held in the stems. This weight can make moving the plant around difficult.

The same holds true for the hedgehog cactus plants like the Echinocactus golden barrel cactus and the giant Mexican Cardon cactus – Pachycereus pringlei.

To be successful with the Cereus peruvianus give it good light and proper watering.

You’ll have a strong stable plant that provides a unique or interesting look to your indoor “art collection”.

Answer: Keep this desert cactus on the dry side during winter but if possible give it plenty of humidity and root moisture when the growth rate is visible during the summer months.

Indoors the cereus plant likes a sunny place in winter, shade from the bright sun in summer. When repotting use a cactus soil mix or a  good indoor potting mix and add about 25% sand.

In summer apply a diluted fertilizer about every ten days.

Question: How can I make my night-blooming cereus flower? JW, NY

Answer: Cereus is a member of the cactus family commonly called the Peruvian apple cactus cereus. However, many other cactus belong to this genus that is not night-blooming.

If planted in good soil and watered moderately, this cactus should bloom each year between June and August. After the blooming season water should be given to the plant very sparingly for a period of three months.

Then as new growths appear, watering should be increased. The plant grows and blooms in the partial shade almost without care. It needs no pruning and requires repotting only after it has obviously outgrown its pot.

Question: Is the red cactus fruit on the Peruvian cactus apple edible? Is it the same as the dragon fruit? Stacey, Phoenix, AZ

Answer: The red fruit of the “apple cactus” is edible and called “pitaya” in Bolivia. Personally, I have never eaten the fruit. Cereus peruvianus is planted and grown commercially for its fruit in Israel. However, the “dragon fruit” found in the stores today is different.

Question: I heard the Queen of the Night cactus will grow outdoors. Can it grow in full sun? Jacquelyn, Cape Cod, Mass.

Answer: Yes Cereus peruvianus can grow in full direct sun. In fact, in some locations, it is planted as a hedge cactus. When planting outdoors make sure the area has good drainage.

Question: I have a huge Peruvian apple cactus. Can it be cut back? Also, would it bloom if it was kept in the basement all year? Our basement has air, light, and sunshine. OW, Indiana.

Answer: The apple cactus cereus may be cut back. Pruning is best done when the plant is in its resting cycle.

That is, after it has quit blooming and when water use is minimal. It should grow and bloom in the basement you describe provided the humidity is not too high.

Question: My night-blooming cereus turns brown at the edges, even on the new shoots. Can you tell me what causes this? VA

Answer: A likely cause is too much water or overwatering the plant during winter. Water can be given freely throughout the growing season. The soil should be porous and well-drained. Cut out the affected parts and dust the wounds with sulfur.