Fluorescent grow lights made it possible for us to grow… Cattleya Orchid Hybrids in our “Basement Greenhouse”.

There is something about an orchid blooming on the plant that strikes one as exotic, lavish, a flower that perhaps only the greenhouse owner can raise. Such was our reaction when in Florida we saw an orchid blooming in a pot that hung casually from a tree in the yard. “Do you suppose…,” I began to my husband, Jack. 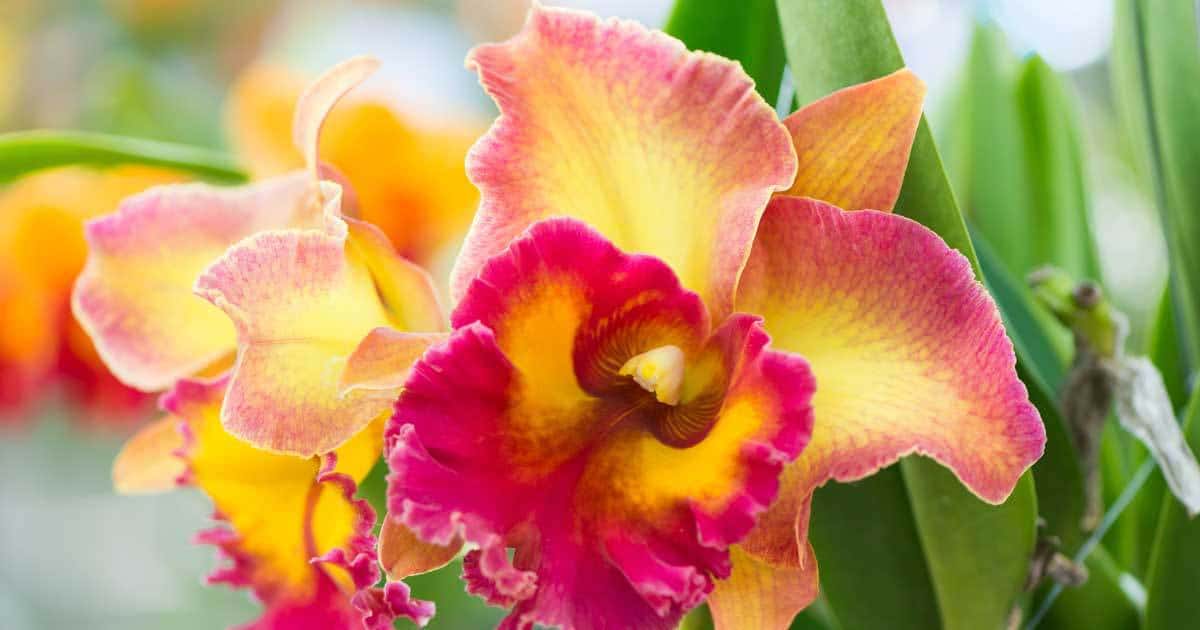 It was a matter of a few months of thinking, reading, talking, then finally joining the local orchid society before we had purchased our first Cattleya orchid plant.

Soon several Cattleya species and a Dendrobium were blooming in the bay window of our dining room. An east south west exposure like ours seemed to be just what they needed to provide the maxim sun sunlight hours we could give them.

Of course, the midday sun through a plate glass picture window burns too hot upon the leaves of a plant whose native habitat is usually the crotch of a tree in the understory of a rain or mist forest of the tropics.

But a loose fabric curtain that may be dropped during the sunny hours between ten in the morning and three in the afternoon, and then caught up again, allows filtered sunlight to play upon the foliage. Read on to learn more about the cattleya orchid hybrid. 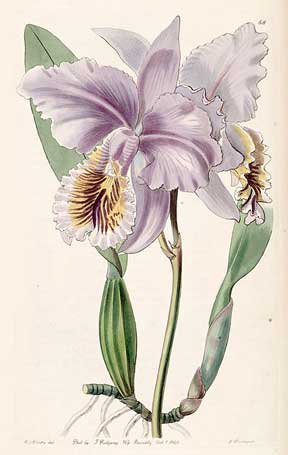 What an Orchid Needs

Humidity, bright light, and food are the basic requirements of an orchid plant.

Humidity was provided in our bay window by placing flat bowls or pans of moist gravel on the tables, and a cake rack over these on which stood the orchid pots. The humidity from this evaporation was supplemented with a fine mist spray of water delivered by an ordinary spray bottle.

You need not worry about this misting, for when you find yourself watching for new growth on the plants or admiring the swelling buds, or merely passing by, pick up the spray gun and mist the plants and the air about them. Misting African violets and other houseplants also appreciate this.

Food can be supplied by one of the soluble balanced preparations marketed for house plants, at intervals of about once a week in the summer when the long days allow the plants to use an abundance of food, or once a month in the darker winter months.

How an Orchid Grows

A Cattleya orchid plant consists of roots, a rhizome that grows horizontally, pseudobulbs, or oval fleshy stalks that grow upright and store food, and a heavy textured leaf born atop the pseudobulb.

At the juncture of the pseudobulb and the leaf appears the flower bud, encased in a rather transparent sheath which parts at the top, permitting the buds to rise upward, then outward before they burst into flower. 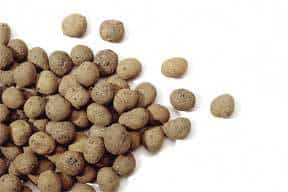 Each pseudobulb has one or more “eyes” from which the new growth develops in a forward fashion as does the iris, thus enlarging the plant.

About every two years it will outgrow its pot and require repotting in a variety of potting media like fir bark or LECA stone, and eventually, it can be divided into two or more plants, provided that not less than four good pseudobulbs remain to each plant or division.

It is in the leaf that the food necessary to the growth of the plant is manufactured before being stored in the pseudobulb, and without light there would be no absorption of food and no flowering.

We had satisfaction, as had others we knew, in growing orchids in the window; but when the “bug” really bit us, there was not enough room for orchids, African violets, gloxinias and geraniums in our south windows.

A greenhouse? The thought held great appeal, of course, but we had heard of the difficulty some of our friends had had in finding anyone willing to care for a greenhouse in the owner’s absence. Now we like traveling as well as having an indoor garden, so there had to be a compromise.

“Let’s try fluorescent lights.” It had come to our attention that this type of lighting was being used in the West to supplement daylight in some greenhouse culture.

The practical member of the family was soon thinking in terms of controls – light control, humidity and heat controls. The idea appealed to him and took root, the more so because of the heartaches we have had in years of outdoor gardening from the work of chewing rabbits, digging squirrels and trampling dogs.

We had plenty of room in the basement… especially with the kids grown and gone. Now it is the “Green Thumb Room,” dazzling white throughout and illuminated with 16 48-inch 40-watt fluorescent tubes.

There are 30-inch wide shelves on opposite sides of this 9 x 11 foot area, the highest being 42 inches from the floor and 28 inches below the lights.

Fixtures with two of these tubes mounted end to end are attached to the under surface of the top shelves to illuminate the lower benches placed about 18 inches above the floor, where gloxinias and African violets grow.

Orchids grow on the width and almost the entire length of one of the upper benches; African violets, seedlings and petunias grow on the opposite side on upper benches. At the end of the room and beneath the benches is space for resting plants and supplies.

Two fixtures of 48-inch, 40-watt tubes mounted end to end shed light 16 hours a day on 24 to 26 orchid plants, the light controlled by a simple electric timer found at most hardware stores.

The orchid plants stand on expanded metal racks, which in turn span three-inch deep pans of wet gravel. The orchid leaves reach to within ten to two inches from the light tubes.

We use two types of tubes, the daylight, and the super deluxe cool white, an equal number of each. In the center of the room, to provide added red rays, hangs an ordinary 60-watt incandescent light bulb.

All of the lights are timed for the 16-hour interval. Humidity, fluctuating from 40 to 60 percent, is created by evaporation from the wet gravel and the occasional sprinkling of the concrete floor.

Heat, an even 70 to 72 degrees during the winter day, is provided by the lights alone. Night temperature, when the lights are off, may drop to 65 or so, but without a lowering of night temperature, the plants would be less able to convert stored food into usable elements.

The door to the room is kept open a few inches and circulating air is provided by a 12-inch oscillating fan which operates a few hours morning and afternoon, thus furnishing an exchange of air.

It has always been our observation that house plants perked up and showed new vigor when placed out of doors in the summer, so why not orchids? They go under a spreading maple tree as soon as the nights are no colder than 60 degrees, some on a table over gravel pans and some hanging by wire hooks from the branches of the tree.

They love this interval in the unobstructed sunlight, the pure rainfall. Of course, here too, one must watch for sunburn, but an ideal location is under a tree that shades or filters the sunlight during the middle of the day in our Midwest; or hanging on the outside east wall of a building.

Hosing at least once a day in hot, dry weather is most essential, and feeding can be carried on at this time weekly.

There are certain precautions that must be taken to protect plants out of doors. A small rail about the table keeps them in place in spite of wind. Strips of aluminum foil hanging about discourage the bluejays from carrying away the potting soil or potting mix material and the squirrels from exploring.

And then there are always more insects out of doors, but Malathion sprays is satisfactory in their control.

When we plan to leave home for a weekend, a week, or for several weeks, we bring our orchids, begonias and other shade-loving plants into the Green Thumb Room in the basement, plug in the lights, pour water in the gravel, and turn on the fan for air circulation.

An employee comes in every five days and top-waters the orchids and pours a measured amount of water in the gravel beneath violets and gloxinias when necessary. The temperature in this room in the summer ranges from 80 to 83 degrees, and the humidity is very much higher than in the winter when the gas furnace is operating.

The water on the gravel evaporates very slowly and refilling is not often necessary. Perhaps it would be well to inject a caution here as to the most often made mistake of overwatering. In their native habitat orchids are subjected to rain, mist and rapid run-off of moisture with drying each day.

I can well remember my great dismay when, after watching time buds of a white Cattleya developing they suddenly yellowed and damped off from overwatering.

The transition from daylight to fluorescent light and back again has in no way been harmful, but we usually protect them from direct sun for a day.

This type of culture has apparently been very beneficial to our Cattleyas, Dendrobiums, Phalaenopsis and Oncidiums. During the past four years the root growth is more vigorous, there is no rest period when under lights, and we have twice the number of flowers as previously.

It is interesting to see the new growths that start out of doors, followed by a new set of pseudobulbs that appear under lights.

Sometimes they all bloom at once, or there will be two or even three periods of flowering, and the flowers initiated under lights have been as large and firm as the others. What a pleasure our home orchid culture has been.

As I write this, there is a beautiful Cattleya slowly unfolding its 30 buds in our bay window, the morning sun giving the white and purple flowers a translucent quality.

And how gratifying it has been to enjoy the indoor garden with our friends who are ever slipping down to the basement to see the Green Thumb Room and how the orchids grow.