Ricinus communis [RISS-i-nus, KOM-yoo-nis] is a perennial flowering shrub or small tree species in the Euphorbiaceae or spurge family.

Although the plant is native to the Middle East and northeast Africa, it has been naturalized and widely cultivated throughout the warm areas of the world, primarily for producing castor oil. 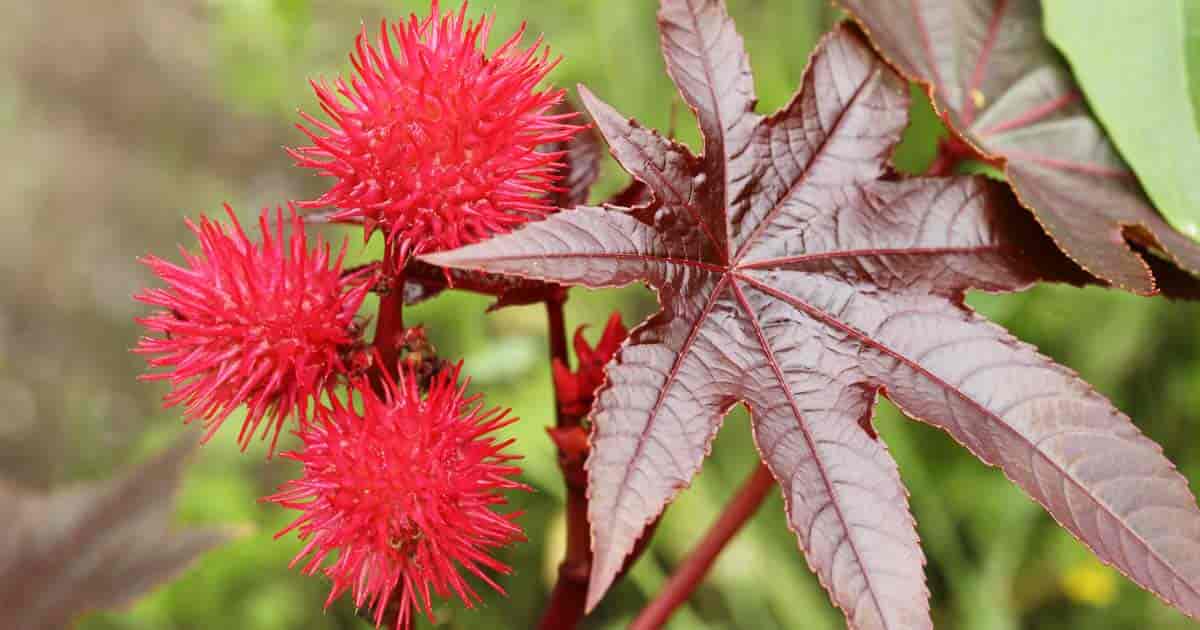 The beans aren’t “true beans”. You may hear it called by its common names including:

Ricinus communis is a robust shrub growing up to 10’ feet in height in cultivation.

Since it grows fast, it often escapes cultivation and can shade out the native flora of an area by forming thickets.

This is why the plant has been declared as a noxious weed in many parts of the world.

In the growing season, the plant needs warm temperatures for about 140 to 180 days to produce a good crop of castor bean seed pods.

The flowers of castor bean plants are large, elongated, and unisexual and are produced in clusters or panicles near the tips of the branches.

Each cluster has both male and female flowers (monoecious) – the yellowish male or staminate flowers are found at the base of the clusters, whereas the reddish female or pistillate flowers are present at the top.

The little spiny ovary of the female flower develops into a fruit or bright red, sometimes Carmencita Pink, seed capsule about the size of a golf ball after pollination.

The ½” inch male flowers each have a cluster of many creams or yellow stamens shedding large amounts of wind-borne pollen.

The flowers typically have 3 to 5 small sepals but do not have any petals.

While Ricinus communis produces flowers throughout the year, flowering is most abundant from March to November i.e., from late spring to early fall.

Castor bean plant prefers full sun, but they can grow in partial shade. However, it cannot tolerate full shade and frost.

They are recommended for United States USDA hardiness zone 9 and above.

Castor bean plant prefers slight moisture, so it needs to be watered regularly in summers.

Reduce watering in winter. The plant cannot tolerate waterlogging, so be careful not to overwater the plant.

Add an all-purpose liquid fertilizer to the plant once a month and spread 1″ inch layer of aged compost at the base when the plant starts to produce buds.

Ricinus communis grows best in deep, well-drained, moist sandy loams within the pH range of 5 to 6.5.

However, it can tolerate and grow in soils semi-arid, arid, low nutrient, acidic, or alkaline.

Castor bean plant grows quickly, so it can spread out of the area.

Hence, it needs to be regularly cut and trimmed to prevent the plant from spreading too much.

Plants are pruned to limit the size or may need staking if top-heavy; otherwise, this plant needs very little maintenance.

If you like plants with giant leaves check out the Gunnera plant.

How to Propagate Castor Oil Plant

Ricinus communis is propagated through seeds.

Before planting, soak the seeds in purified or filtered water in a small pot for 24 hours.

Sow the seeds about an inch deep in the soil, leaving around 3’ feet of space in between.

For better results, add some well-rotted compost in the hold while planting.

When grown in pots, make sure to use potting mix and large containers.

Ricinus communis is a fast-growing plant – under the right conditions, the seed will germinate between 15 to 20 days.

Spring is the best time for outdoor plantation.

When planting indoors in a pot, sow the seeds about 6 to 8 weeks before last frost.

Wait for the weather to get warm before transplanting into the ground.

Castor plant only becomes the target of pests and diseases when grown poorly and in humid conditions.

In such cases, the most common disease is the rusting of leaves caused by Melampsora Ricini (a type of fungi).

Mirids are one of the pests which attack the inflorescence and can cause significant damage.

Different types of rots can attack the seedlings and can cause damping off.

Aphids are attracted to the plant. Ladybugs eat them, but try washing the aphids off the plant with a strong blast of water. Repeat the process until the pests are gone.

Although Ricinus communis is also grown as an ornamental plant, it has been widely cultivated since ancient times mainly for the extraction of castor oil.

There have been records of castor oil used in ancient Egyptian and Greece.

The seeds have been found in ancient Egyptian tombs.

Castor oil has also been used in cosmetics, soaps, toiletries, and skincare for a long time.

At present, castor oil is largely used as a lubricant in industries.

While the seeds of castor bean plants are rich in triglycerides and the oil offers many benefits, they are poisonous plants.

The oil-producing seeds are the most toxic and are lethal to humans, especially small children, and livestock.

The leaves, on the other hand, are mildly poisonous.

The poisonous elements are only water-soluble, which means they are not present in the oil.