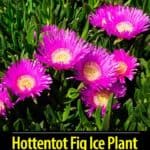 A strong and trailing plant, the Carpobrotus edulis [kar-poh-BROH-tus] [ED-yew-liss], a member of the family Aizoaceae known for forming dense mats of foliage.

Carpobrotus edulis is native to the coastal habitats of South Africa and was brought to coastal California in the early 1900s to stabilize soil along railroad tracks.

Later it was used by Caltrans for freeway embankment ground cover.

In California, you’ll find it from north of Eureka and as far as Rosarito in Baja California.

It’s an invasive species in many regions including Australia, California, and the Mediterranean.

In New Zealand, they classed C. edulis as an unwanted organism because of the trouble it causes.

For example, they change the natural process in sand dunes, and they create a build-up of organic matter, which allows non-native plants to invade who typically couldn’t have grown there.

It was promoted as an ornamental plant for several decades.

You may hear it by its common name or botanical name:

The stems of the ice plant spread out and grow up to 10′ feet in length, forming long lustrous mats on the ground like a carpet of green.

These are bright green and cone-like at the base, but some are tinged red around the edges.

The flowers of the Carpobrotus plant grow up to 4″ – 5″ inches in diameter.

It grows yellow flowers first, then fades to a gorgeous orange.

The plant flowers nearly all year, peaking in late spring and early summer.

The center of the flower contains several stamens, which are ringed by a starfish-shaped stigma.

The stems are edible and curve upwards to a point.

The fruit of the plant is edible and is about 1.5″ inches in diameter, and the outer part becomes leathery and wrinkly with age.

Eat it when it’s fresh and ripe to get a strong salty/sour taste.

The plant gets weak and damaged in temperatures below 28° degrees Fahrenheit (-2° C).

It thrives in full sun, ensuring it has a sunny position if grown indoors.

The edulis plant puts down roots as it spreads and grows fast with proper care.

It is recommended for USDA Hardiness 7 – 10.

To ensure the Carpobrotus grows well, plant it in sandy soil, well-drained, in a partially shaded area.

The plant can grow on dry walls and can remain resilient during droughts.

This plant species can withstand high winds and salt spray, making it perfect for seaside homes.

The planting area for the carpobrotus plant should have a neutral pH and be a sandy and well-drained soil.

The plant’s roots will rot if planted in damp soil for too long.

It will grow using either cuttings or seeds.

If you use a seed, use soil warm enough to make it germinate.

If you use cuttings, which are considered to be the easiest out of the two options, get them from a plant growing actively or during spring and early fall.

The shoots you cut should be  3″ – 6″ inches in length. Remove all of the leaves except those on the top.

Since ice plants are succulents, they cannot tolerate soil too moist during the late winter months.

When kept consistently dry, it can become an invasive plant.

Allow the soil to dry out a bit between each watering, especially during the winter when the plant is dormant.

If you want additional flowers, plant them in a container and feed the plant a balanced fertilizer following the directions provided on the label.

If planted in the ground, feed the soil if it’s poor quality or you don’t see enough blooms for your liking.

How to Propagate Pigface Carpobrotus

If you want to grow it separately in a controlled environment (such as a flower bed):

The roots of the plant take at least 3 weeks to appear, but the plant grows fast when they set in.

While taking a cutting, don’t snip off from older sections located at the center of the plant.

Go for the young and fresh areas with new growth springing from them.

Sap-filled pieces will rot off; choose a firm piece instead.

The biggest enemy of the Carpobrotus is the weather – rain can make the soil too watery to induce growth and cause it to rot.

The plant can become infested with mealy bugs and plant scale.

Using glyphosate herbicides to get rid of Carpobrotus as an invasive plant with chemical control.

Carpobrotus plants are usually harvested for their medicinal uses and their edible fruit.

However, it’s also collected to stabilize sandy soil like sand dunes. Potted where they can be contained, they make attractive planters.

The juice of the leaf has been taken orally for relief from dysentery and other digestive issues.