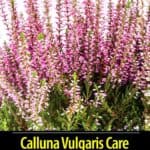 A part of the flowering plant family Ericaceae, this perennial plant has several common names, including:

The plant is native to Europe, Iceland, the Faroe Islands, and the Azones.

However, they have been introduced in North America, including the United States, New Zealand, Australia, and the Falkland Islands.

The word means “to cleanse or adorn,” referring to the plant used to make brooms.

Did you know the Purple heather is one of the two national flowers of Norway?

Besides this, the plant is considered an icon of Scotland, where it grows widely.

The ling plant is native to habitats including moors, hillsides, dunes, heaths, and bogs.

When these growing conditions are replicated in other locations, the evergreen broadleaf shrub can grow up to 2’ – 3’ feet tall.

Their ground spread is mostly equivalent to the height. Branching is lush and upright, forming thick mats.

The heather plant’s foliage is dense and compact, making the plant excellent for ground cover.

The bloom time for the showy Calluna vulgaris flowers is during late summer.

In wild plants, the flowers typically sport a mauve color, but white flowers are not uncommon.

The flowers are in terminals, one-sided, and have spike-like racemes.

The heather plant also produces a fruit that appears as capsules.

While Heather’s original mauve and white flowers are beautiful, many cultivars are chosen for unique flower and foliage color combinations.

In fact, the Royal Horticultural Society lists over 800 cultivars.

Some of the common cultivars include Cuprea, Firefly, Long White, Beoley Gold, and Boskoop.

Calluna vulgaris is hardy to USDA hardiness zones 4 to 6.

It does the best in zone 5 but tolerates warmer parts of zone 4 quite well.

It does not like high humidity and heat in areas south of the USDA zone.

As for light, the plant flowers grow much better when planted in regions with full sun.

In hot and humid summer, the heather plant may appreciate partial shade during the day’s hottest hours.

Water the plants once or twice a week. However, be careful about overwatering.

Too much water may lead to root rot and inconsistent growth.

Once the plant is established, it won’t need frequent watering.

Fertilizing is not essential for Scottish heathers.

In fact, the plants prefer poor soils and may even be harmful to some.

If the soil you’re using is significantly poor, a low-rate fertilizer fed once during the growing season may work for the acid-loving plants.

A raised bed or mound of soil may improve drainage if you’re using heavy soils.

Use peat moss to alkaline soil to raise the acidity.

Transplanting heather plant should be done carefully as the plants have shallow root systems.

Start by digging a hole twice as wide and half as deep as the root ball.

Remove the plant from the container.

Make a few vertical cuts along the length of the root ball on the bottom.

Break up some of the roots and work in the soil.

You should prune the plants in late fall to early spring underneath old flowers.

Shear the heather plant lightly to encourage better flowering and lush growth after it blooms.

The growth can become leggy and straggly if you don’t prune the plant annually.

Mulch the plants after planting to allow the soil to retain moisture.

How To Propagate Ling

When propagating Calluna vulgaris from seeds, sow them in a shaded part of a greenhouse in February.

Sow the seed in moist, well-drained acidic soil on the surface, just covering it.

Treat it to cold stratification for 4 to 20 weeks.

When seedlings are large enough to handle, transfer to individual pots in the winter and grow then in the greenhouse.

Transfer them to their permanent location in late spring or early summer.

These should be done in July/August, October/November, and spring respectively.

If you don’t provide partial shade in hot summers, heathers may be susceptible to stem and root rot.

Additionally, keep an eye out for spider mites and oyster shell scales.

Is The Plant Invasive?

The plant does have a tendency to be invasive in some areas in New Zealand.

Smaller varieties of common heathers are used as full sun ground covers and in rock gardens.

Other shrub varieties are planted in mass on hillsides.

Also, they are often planted in borders as background plants.

Besides garden uses, the plants have various other uses such as a food source for sheep and deer and to make honey.

Formerly, the plant was used to dye wool and tan leathers.