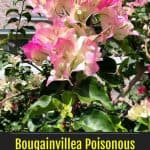 Bougainvillea is one of those plant genera which you didn’t know you needed until you’ve seen one. Throughout most of America, you’ll find people growing bougainvillea in pots.

However, in the warmest climates, these plants are often used as attractive security, privacy hedge, or protective fencing.

There’s no denying the appeal of these South American shrubs, vine, or trees and their wide variety of colors, even if the experts can’t agree on just how many species there are.

Of course, the big concern with any ornamental plant, especially those which can be grown indoors, is whether or not Bougainvillea is poisonous or toxic.

The answer to this is both yes and no.

In small amounts, ingesting bougainvillea is considered harmless, but some people do have more severe reactions.

Your bougainvillea is generally considered nontoxic, but some parts may cause health issues.

The leaves are generally considered nontoxic.

Bougainvillea sap is known to cause skin problems similar to poison oak or poison ivy with some individuals and may cause side effects when ingested.

The sharp thorns are also known to cause a reaction in some people.

There is some minor risk in some individuals of an allergic reaction or dermatitis when coming in contact with the sap, but this risk may be mitigated by wearing gloves while handling the plant.

Similarly, gloves will reduce the risk of getting pricked by the plant’s thorns.

Children are a little more susceptible to negative effects due to their smaller size and larger curiosity.

Ingesting parts of the plant (especially in large quantities) may result in diarrhea, nausea, or vomiting.

Children playing near the plant may get pricked by the thorns, which are known to cause dermatitis and other reactions.

The ASPCA doesn’t include bougainvillea on its list of toxic plants for either cats or dogs.

Ingesting one or two leaves won’t harm your pet, although it may cause nausea or other symptoms in larger quantities.

As with children, the bigger risk is with the thorns and sap.

Cats and Dogs are less likely to get themselves pricked, but snacking on the stems may expose them to the sap.

Pets are less likely to have a skin reaction than children, but it can still happen.

Be sure to consult with a vet if your pet is showing signs of a reaction to the plant.

A Note on Bougainvillea Thorns

Chances are, you have at least one thorny plant growing somewhere nearby, but bougainvillea takes this defensive measure one step further.

The plant’s thorns are sharper than rose thorns and can easily scratch or prick.

Unlike roses and similar thorny plants, however, bougainvillea thorns have a waxy coating at the tip, which is designed to cause irritation. This causes some people to consider getting rid of their Bougainvillea plant.

Children and those with more sensitive skin may develop a reaction to this substance.

These symptoms are usually not severe, but a few individuals have been known to have more severe allergic reactions.

In such cases, a pricked finger may swell enough that it becomes stiff or immobile.