The Bird Of Paradise Flower – exotic, colorful, tropical and frustrating.

Of all the plants grown, few attract the attention that is paid to the Strelitzia reginae – the Bird of Paradise plant.

It grows outdoors around the year in the most southern portions of our country.

Further north, where freezing temperatures occur, the bird-of-paradise may spend the summer outdoors, but it needs the warmth of a sun porch, basement, or greenhouse the balance of the year. 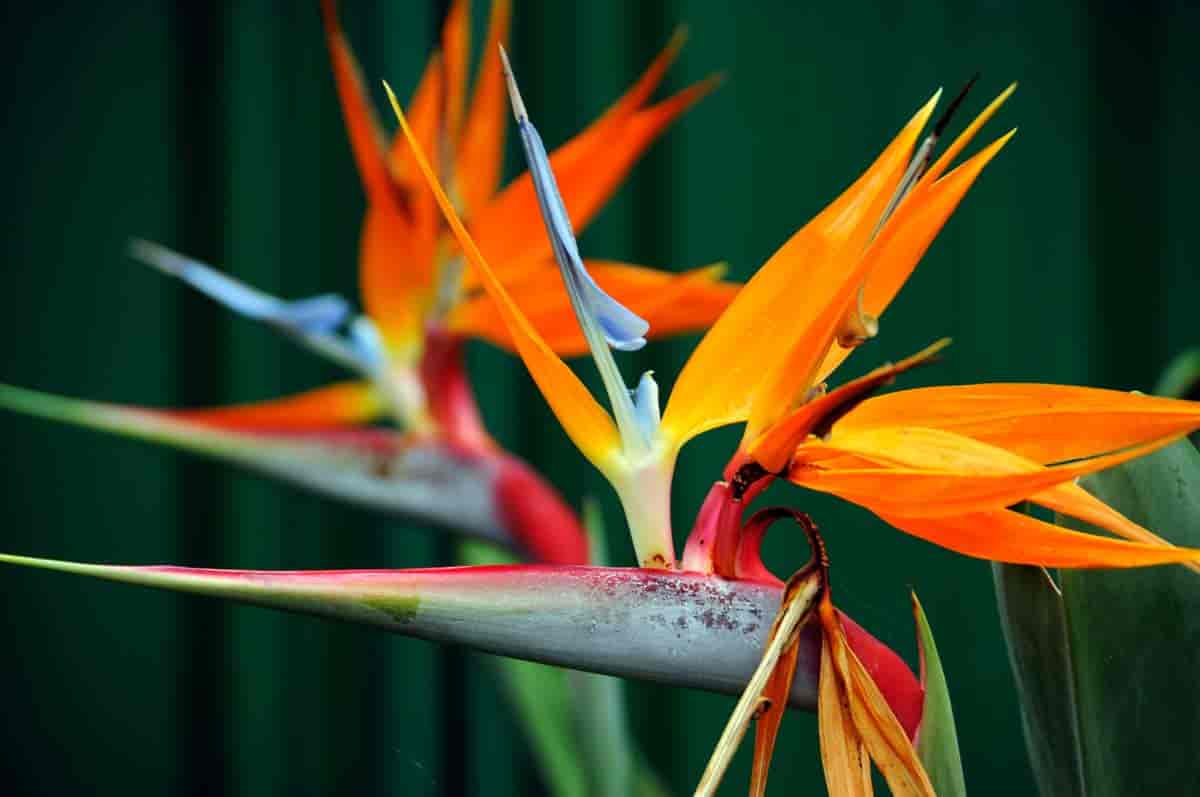 However, there are so many factors and ways to answer the Bird of Paradise Flower question.

Let’s dig in and try to answer a few of the questions on this topic.

Be sure to read our article – Bird Of Paradise Plant Care: How To Grow Strelitzia Reginae

Why Doesn’t My 5 Year Old Bird Of Paradise NOT Bloom?

Question: I have a bird-of-paradise that is five or six years old and it has never bloomed. It is in front of our house (Florida), which faces south.

I feed it and it has grown about three feet in height. I would like to know why it doesn’t bloom.

Answer: The bird of paradise not blooming is the main complaint from nearly everyone who grows the bird-of-paradise (Strelitzia reginae.)

For one thing, your plant is not old enough.

Normally, a bird-of-paradise does not flower until it is about seven years old. It is possible for a plant to bloom a year or two earlier if it is pushed and given the best attention.

Feed with a soluble fertilizer once a month from April to September, or three times during this period with a dry fertilizer such as 4-8-8.

In October, give an application of low-nitrogen fertilizer (0-14-10, 2-12-12) to plants that have reached what should be flowering size but which still refuse to bloom.

Never let plants to need water during the warm growing season. During winter, give only enough water to prevent leaves and roots from shriveling.

You say that your plant is on the south side of the house.

This does not necessarily mean sun. Strelitzia needs full sun until one or two in the afternoon and can take it all day if given enough water.

Dry and Brown Tips On The Leaves

Question: My bird-of-paradise will be two years old this May and it has not flowered. It has 13 leaves and the tips are dry and brown. Why?

Answer: Leaf tips tend to brown when plants are grown too dry.

But if you have 13 leaves on a two-year-old plant, you have obviously given it a lot of attention. Probably too much and have overfertilized.

See answer to the previous question.

Question: I have a bird-of-paradise that flowered two years ago. It was so big I had a landscaper put it in a container and it hasn’t flowered since. Can you tell me what is wrong?

Answer: The bird-of-paradise resents root disturbance and should not be divided or transplanted except when absolutely necessary.

Transplanting sets plants back a year or two and you must wait for them to re-establish themselves.

Does Bird Of Paradise Only Bloom In a Pot – True?

Question: Here in Florida I thought I could grow the bird-of-paradise in the ground.

The cold has not hurt it but I have had the plant four years and it hasn’t bloomed. Somebody told me it would not bloom except in a pot. Is this true?

Answer: Of course not. Nature did not provide pots for the bird-of-paradise in its native South Africa.

It is true that some plants flower better when they are rootbound and people get the idea they must be in a pot.

But plants create this rootbound condition for themselves in the ground by forming clumps so that their roots bind themselves.

Your plant is still too young. When Strelitzia is grown in the ground, it generally has to make a clump of at least two fans before it begins to flower.

Bird Of Paradises Seeds For Sale?

Question: I have access to bird-of-paradise seeds and wonder if this would be a good cut-flower item to sell on the internet. Can you tell me if there is any special trick in handling the seeds?

Answer: Soak the pealike seeds in lukewarm water for three or four days.

As a business venture, this seems rather a long shot. Even if you get a good percentage of germination, plants will not reach flowering size for seven years.

Male and Female Bird Of Paradise?

Question: My bird-of-paradise has flowered for several years but never set seed.

A neighbor told me my plant was male and I should get a female one. Can you help me? I have never seen any such thing advertised.

Answer: You never will. You do not need male and female plants to get seeds. You need to do your own cross-pollinating.

In South Africa, birds do the job, but our birds apparently haven’t yet caught on to where the nectar is.

That little blue platform (petals) conceals the nectary. Pull it apart gently and you will find the stamens and pistil. Take the pollen from one flower and dust it on the stigma of another.

When To Divide A Bird Of Paradise?

Question: I have a huge specimen of bird-of-paradise that is about to split the pot it is in. I need to divide it but want to know the best time to do it.

Answer: You can divide the plants any time, but it is best in January or February when they are dormant (not making new growth).

Pull or cut fans apart the same way you would a clump of daylilies. The fleshy roots are brittle. If you break any, dip the broken ends in a fungicide powder and shake off excess powder.

What Time Of Year Does Bird Of Paradise Bloom?

Question: Each time my bird-of-paradise puts up a new shoot, I think it is going to flower but it turns out to be another leaf.

I know it has to be seven years old and my plant is nearly that. What time of year can I expect it to bloom?

Answer: The bird-of-paradise can bloom any time although it may vary from one part of the country to another.

In California, it blooms in winter. In Florida, the usual flowering time is summer but I have seen it in bloom in Tampa in March and in Jacksonville in December.

Here is a tip to help avoid you getting up false hopes. If the new shoot is flattened at the end and curled on itself, it is a new leaf.

If it has a sharp needle-like point, it is a flower spike. Large, established plants bloom periodically throughout the year.