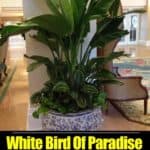 When most of us hear of the “Bird of Paradise,” we think of the commonly grown orange cut flower Strelitzia reginae, not the White Bird of Paradise plant. Strelitzia nicolai – Pronounced: stre-LIT-see-uh NICK-oh-lye

Its large banana plant-like leaves grown from its clumping stalks are loved and used by many in various landscape designs, especially when a tropical landscape look is wanted.

The Bird of Paradise leaves is arranged in a fan-like position on the upright upper portion of the plant’s trunk. Outdoors, Floridians and Californians enjoy this landscape plant where a mature plant can reach heights of 20′ feet tall or more.

The “White Bird” is native to South Africa. This member of the Strelitziaceae family is only one of three arborescent species in the genus, the other two being Strelitzia caudata and Strelitzia nicolai (AKA the giant white bird of Paradise).

Also known as wild cape banana, kaapse witwildepiesang (Afrikaans), isigude esimbalimhlophe (Nguni), and white-flowered wild banana (not to mention Heliconia alba, Heliconia augusta, Strelitzia angusta, and Strelitzia augusta in botanical circles), Bird of Paradise is one of the most famously exotic plants in the world.

Despite the nicolai Strelitzia plant having such an exotic look, the white bird of Paradise is surprisingly easy to grow and can even be grown in containers.

Many love the White Bird Strelitzia, as these tropical plants provide a lush tropical flair to various landscapes, pool areas, patios, and even in containers with a drainage hole.

Most White Paradise plants tend to grow in clusters with multiple stems growing out of a single base. These stems make the White Birds resemble the Palm tree, except that it is thinner than most palms.

These trees can reach a maximum height of about 20′ feet tall.

The single, unbranching stem is about 1′ foot thick and exhibits leaf scars as it ages.

It produces rhizomes that will sucker out if not maintained.

White-flowered wild banana leaves, which are lanceolate and can measure as much as 6′ feet long and nearly 2′ feet wide, eventually form a crown at the top of the stem much like a palm.

These leaves are pretty fragile and regularly tear in the wind. Read: Strelitzia Nicolai growth rate.

NOTE: When lit with landscape lighting, some fascinating looks appear at night.

The “White Bird” isn’t a small plant but a very upright plant allowing it to fit into tight spaces indoors. Their large banana-shaped leaves add a rich tropical look to almost any interior, and outside they create cool effects when lit.

White Giant Bird Of Paradise flowers can reach a size of 10″-12″ inches, but plants need some maturity (few years old) before flowering. Therefore, do not expect flowers on indoor plants.

While it can bloom at any point in the year, the White Bird of Paradise most often blooms between July and November.

It produces a single boat-shaped bract approximately 1′ foot long that slowly splits to reveal 5 to 10 white flowers one at a time.

The flowers give way to a three-lobed seed capsule that bears round brownish-black seeds with yellowish-red tufts.

Giant Bird of Paradise plant flowers can be seen at the point where the leaf fan protrudes from the stem. These flowers are significantly large with a light blue tongue, sitting in a purplish bract. Following these flowers are triangular seed capsules.

Generally speaking, this plant loves full sun but does well in bright light and bright indirect light shade in more harsh climates, as the leaves are known to scorch in intense sun.

It likes moderate to high humidity, which may be augmented with a pebble tray or humidifier when indoors.

It can be planted outdoors in direct sun in USDA hardiness zones 10 to 11 but does grow indoors or as an indoor/outdoor container plant in cooler regions.

Indoors, it is best to give Nicolai as much bright light as possible.

This plant is susceptible to root rot, especially indoors. Therefore, you should practice the soak and dry method.

Allow the soil surface to dry down around 1″ inch deep before thoroughly watering the root ball.

Avoid using tap water that contains chemicals. Instead, using room temperature rainwater, filtered water, or distilled water, slowly pour around the radius of the container until you see it begin to seep from the drainage holes.

Cut back on the water in colder winter months to allow your plant to rest.

Fertilize using a balanced liquid fertilizer every two weeks during the spring growing season and cut back to monthly in summer.

Be careful not to overfeed, as this will cause excessive foliage growth while hindering the flowers.

It is best to keep Giant White Bird on the dry side.

It also likes a “salt-free” diet. Make sure you use good water and stay away from lots of plant food fertilizers.

Whether in a pot or the garden, the bird of paradise plant likes a well-draining, organic soil mix.

Nicolai can handle a wide variety of soils and can grow in a variety of conditions. However, the plant cannot take the roots sitting in an extremely WET or soggy soil mix.

A good blend will include either garden soil or standard potting mix with a mix of coarse sand or perlite for an aggregate and leaf mulch, manure, or peat moss for the organic matter.

The tree should be repotted in fresh soil every three years using a pot one size larger.

Pruning is generally not required, although you may choose to remove dried, dying, or yellowing leaves to keep the tree looking its best.

Each evergreen leaf is sensitive to strong winds. For a tidy plant, most growers periodically remove ragged leaves.

Outdoors plants also need some grooming, removing leaves from time to time, as the large leaves can become ragged with extreme leaf splitting from winds.

How To Propagate The White Tropical Bird

While it’s possible to propagate through seeds, the most common method is to divide the rhizomes in early spring.

Propagation from seed is slow but preferred. Propagation by division is possible, but unlike banana plants, the White Bird takes a long time to recover and “look good.”

This bird of Paradise is frost tolerant down to 32° degrees Fahrenheit.

It’s also resistant to most pests and diseases, although root rot, spider mites, and mealybugs are known issues. Other common pests such as aphids, scale, and whiteflies may infest from another infested house plant.

Some parts of the Strelitzia plant are toxic to both humans and pets if ingested.

Most diseases and pest problems occur when the plants are young and growing in the nursery. But, always examine the plants and wipe the leaves clean.

We use natural Neem Oil insecticide as our preferred spray for pest control. As for diseases, once established, White Birds of Paradise trees have no real problems. Avoid overwatering.

Perfect for containers, this plant is often grown on terraces, patios, and entryways.

It can either be displayed on its own or with groups of other plants.

Strelitzia Nicolai In The Landscape

The bird or Paradise white, with its large, upright, clumping stalks and banana-like leaves, lends true tropical, exotic feel to any landscape.

Although the plants with their fan-like leaves resembling the travelers’ palm are usually smaller in the landscape. When mature, they can reach heights of 20′ feet tall or more. Over time the old leaves fall off, exposing the trunk.

The white bird-of-paradise is an excellent plant for use in front entrances and creates quite a “splash” when used as a “pool plant” in pool landscaping plans.

Give the plant plenty of room to grow, mature, and develop. Once mature, the unusual flowers of white accompanied with a dark blue tongue are welcome additions.

Strelitzia grows exceptionally well when planted in full sun in well-draining soil that holds moisture. Protect the leaves from high winds as the leaves can become torn and ripped. Groom the plant by removing dead leaves.

Overall, planted in the ground or used in containers, the giant bird of paradise palm is a beautiful landscape addition.

As mentioned above, Strelitzia White Bird may have become more popular since the 1980s. However, it has been admired as a graceful beauty back to the late 1800s. In “The Garden,” an illustrated weekly journal of horticulture shared this about the “white bird of paradise” back on August 22, 1874.

This plant is one of the most graceful members of the Musal alliance and deserves to become popular in our gardens and conservatories as a striking and elegant decorative foliage plant. It is sufficiently hardy to withstand our climate during the summer months and grows even more freely than most of the Musas when planted in richly manured soil and warm sheltered positions.

In habit, the plant is more robust than any of its cousins if we except S. augusta, which frequently attains a height from 30′ to 40′ feet, treated as a warm conservatory plant. Both the last-named plants are chiefly remarkable for their fine foliage, but some of the smaller-

growing kinds, as S. ovate and the even more beautiful S. regina, are well-known flowering plants, generally grown in a warm conservatory or in a humid plant stove.

These species will, however, both grow and flower well in warm sheltered positions out-of-doors and form striking objects massed along with Musas, Palms, and the larger Aroids.

Our illustration gives an excellent idea of the noble port assumed by well-grown specimens of Strelitzia Nicolai, which, although common as a half-hardy foliage plant in many Continental gardens, is very rarely to be met within this country.

The “White Bird” has been grown for many years, but it took a little Madison Ave. to bring it to center stage as an indoor plant.

In the late ’70s, the magazine “Architectural Digest” did a photoshoot of an apartment living room… the famous clothing designer (Haltson, I think) in New York.

They needed very tropical-looking plants to frame the apartment, featuring Central Park as its backdrop.

What do you think they used?

You guessed it! The “White Bird of Paradise plant” they picked up at a nursery in Homestead, Florida.

The magazine cover featured the Central Park shoot, and people have been asking for the “White Bird houseplant” ever since.