Among shrubs, the Azalea plant offer a greater range of color and form, length of blooming period and, therefore, value to the landscape than any other woody plant.

Provided you live in a climate-friendly to azaleas (most of the eastern part of the country and Pacific Coast) and follow the simple instructions suggested here, you will find that azaleas are also easy to grow. 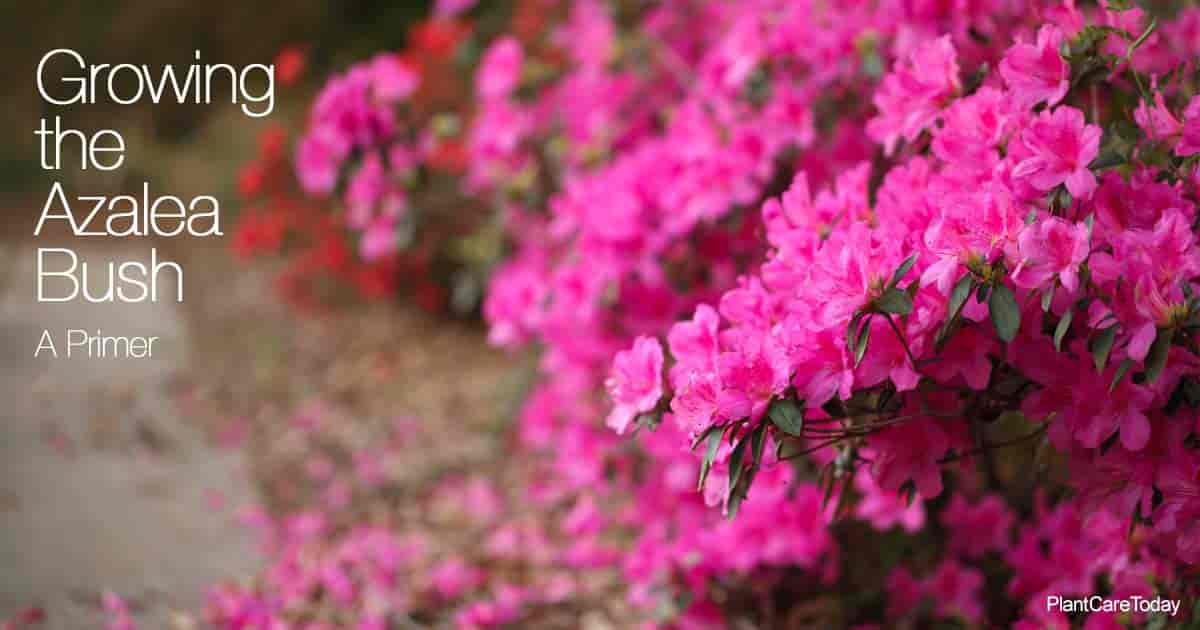 Many people ask “What KInd Of Soil Do Azaleas Like?“ The answer is – Acid Soil

Most virgin soils in the eastern portion of the United States, a few small areas in the Midwest, and practically all the Pacific Coast are sufficiently acid for these plants.

But look out for soils in long-established lawns, gardens or cultivated fields.

Lack of acid organic matter, and the continued use of alkaline fertilizers (or pure lime) in such soils, will have increased the pH to an unsatisfactory level.

However, soils most frequently found unsuitable are near foundations of new homes, terraces, sidewalks, etc.

This condition is brought about by seepage of alkali from mortar and other building materials.

Unfortunately, too many builders bury bits of plaster, mortar and broken concrete in the process of grading the grounds.

Without the removal of these foreign substances and the re-acidification of the soil, acid-loving plants will not thrive.

Plain agricultural sulfur is the best ingredient to bring about proper acidity. The amateur who does not have his own soil testing equipment should have the soil tested.

Do not use aluminum sulfate or magnesium sulfate as they tend to make soils toxic.

Generous mixtures of peat moss, oak leafmold, rotted pine needles, and many other organic materials will make most soils (not containing large amounts of building waste) suitable for azaleas.

Even if the soil is sufficiently acid a further application of these organic materials
will prove beneficial.

But compost materials generally may not be entirely satisfactory, if they consist mainly of elm or maple leaves, grass cuttings, weeds, etc.

Such compost will add fertility but should be accompanied by sulfur at the rate of one cup to a bushel of compost.

All added compost and peat moss should be thoroughly mixed with the soil to a depth below (12” to 15” inches) the ultimate reach of the azalea roots. Adding coffee grounds in the garden is also a good idea.

You can never cure poor soil condition or lack of appropriate elements with mulches or top-of-the-soil applications of Azalea fertilizers.

In fact, there is no short cut to proper soil preparation.

If you have azaleas already growing in unsuitable soils, lift them, set them aside in a shady place and, after a thorough soil preparation, replant.

People living in areas known to be predominantly alkaline (especially if the water is hard) should not try to grow azaleas unless they are willing to incur the expense of replacing existing soil and are willing to provide a means of storing rainwater (rain barrels) for use in dry periods.

Except within the northern limits or the extreme southern limits of the azalea-growing area, azaleas will grow in almost any exposure provided they are given proper care.

In the South, southern exposure should be avoided because of too much summer heat.

In the extreme North, the southern exposure should be avoided because of the excessive amount of transpiration (or desiccation) that takes place during sunny days – especially when it freezes at night and thaws during the day.

In the North or the South, azaleas should not be planted in frost pocket locations where early (generally the first killing) frosts will damage the flower buds or new growth before the plants have had time to harden normally after cool nights in the fall.

As for winter hardiness, plants near the northern limits of the azalea-growing area on a northern exposure will stand a better chance of surviving a very severe winter than those on a southern exposure.

With foundation plantings, the same exposure situation exists, i.e. east to northeast and west to northwest are better than the south.

Even the absolute north side of a building is good provided the plants are spaced back from the wall to assure some direct sunshine in midday in summer.

But if you have no place except the south side of the house, you can still grow azaleas if you provide a good mulch and sufficient water; and for best results shelter them during winter. 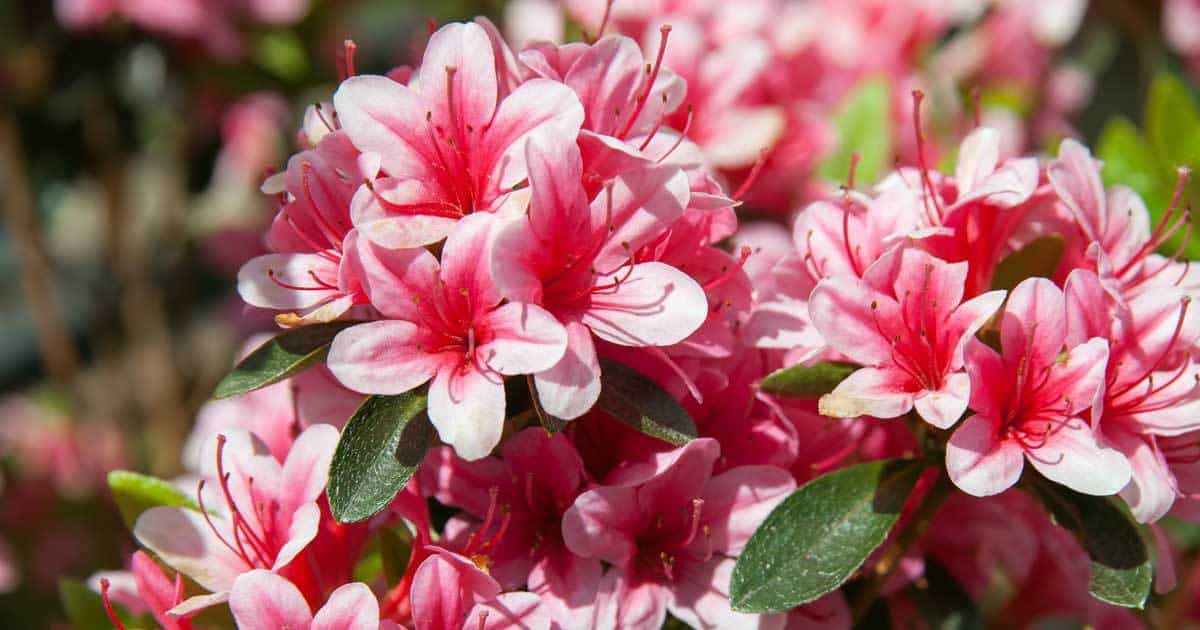 What Kind Of Drainage Does An Azalea Bush Need?

Good drainage is an absolute must.

Even when the water naturally drains away from the roots or with a proper slope, the roots may tend to become waterlogged when planted in heavy soil.

Digging a hole in clay and putting loose material in the bottom is somewhat like putting gravel in the bottom of a barrel – the only way to drain a barrel is to provide a means for the water to escape.

The bed should be deeply and widely prepared with plenty of loose material. Excellent results can be had if these drainage rules are followed.

Usually, if the bed or border is on the upper side of a sloping yard, it may be kept at the approximate level of the adjacent ground.

But, if it is on the lower side of a sloping lawn, it should be several inches higher than nearby soil level to prevent runoff water from settling around the roots.

The residue of strong fertilizers, lime, weed killers, etc. used on most lawns are all injurious to azaleas.

Selecting plants from a color point of view is a matter of personal taste.

But a mass of vivid plants – though attractive when small – will as large plants present an extravaganza of color rather than a pleasing picture.

If selecting azaleas for a large group planting, use shrubs of a tall-growing habit for the background, ones of medium height for the center, and low-growing ones for the front.

As for blooming dates, you can find plants of different growing habits that flower early, midseason or late.

Also, a rather complete color selection is available for any class of growing habit or blooming date.

But there is more to selection than mere color, growth habit and blooming date.

The health-condition of the plant at the time of purchase is vital.

Good soil preparation at the time of planting will have a lasting effect.

For the bed – in the center of the lawn or the border – the soil should be dug at least 15” inches deep, stones, roots, and debris removed, and plenty of peat moss (or good acid compost) and cattle manure mixed all the way down.

(A bed of 100 square feet in area of ordinary soil should use at least two large bales of peat moss and 50 pounds of dehydrated cow manure.)

If planting in early spring, add about 3 pounds of cotton seed meal (or soybean meal); but if late in the summer, it would be better to wait until early the following spring before applying the cottonseed meal.

But they fail to warn sufficiently of the difficulties of achieving that objective.

If you dig a hole in an established and settled lawn and put considerable loose substance under the plant, in time it may settle and be too low.

But consider the converse of that situation where all soil in a bed is mixed to the bottom with loose materials.

If the ball reaches halfway to the bottom and the top of the ball is set exactly level with the loose soil, then you may expect the plant to settle only one half as much as the rest of the bed.

Under this situation, you may expect your plant to be too shallow within a very short time.

Watering is necessary at the time of planting because the plant needs moisture to assure a quick start in its new location.

Of even greater importance is settling the loose soil around the roots so as to avoid all air pockets.

Once the ball is set in the hole at proper depth rake a small amount of loose soil (without packing) around it and fill the hole with water without wetting the other soil.

After the first watering has fully settled the soil around the bottom of the ball, fill with loose dry soil almost to the top of the hole and then water again.

When this has fully settled, cover (to ultimate level) with dry soil and firm down very lightly. This latter operation assures capillary action – holding the water from further rapid settling and at the same time retarding evaporation.

Should You Cultivate Around Azalea Roots?

The quick answer? No, Never!

The soil around azalea roots should never be scratched with a hoe or rake.

If it is felt necessary to edge with a sharp implement (I never permit it in my garden) make certain that the edge is far enough back from the plants not to injure surface roots.

Fertilization of azaleas set in properly prepared and mulched soil is seldom needed except to replace nitrogen temporarily lost as a result of decomposition of certain kinds of mulch or before a new mulch has decayed enough to provide food naturally.

Pending a time when a portion of the mulch becomes well-rotted and is available as plant food, it would be well to apply cottonseed or soybean meal at the rate of 3 pounds per 100 square feet (or about 1/2 cup around a plant of 24 inches’ spread) in early spring.

If your plants do not thrive and you feel the soil is lacking in fertility, then purchase some broad-leaf evergreen acid fertilizer and use it as directed on the bag.

Remember – more damage is done by overfertilizing than with under fertilizing. Late fertilizing, causing new growth late in the season, is almost certain to bring on winter damage.

A good acid mulch kept around the plants is most helpful. A mulch will prevent deep freezing in the winter, thus allowing the lower roots to send up moisture to compensate for winter transpiration.

But perhaps it serves the plant best in summer by retaining moisture and coolness about the roots.

Sawdust is an excellent mulch but the period of decomposition is long and it tends to rob the soil (until completely rotted) of nitrogen. Its use for the first two years, at least, should be supplemented with sulfate of ammonia.

Do Not Prune Azaleas

Plants finding their own natural form are more winter hardy, and they have more character and appeal than those artificially forced into symmetry.

Plants of an airy nature at first appear straggly but they soon send out lateral growth to make a pleasing form.

When a plant must be trimmed because of having outgrown its space, prune early in (or before) the growing season.