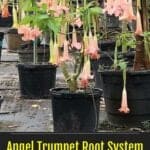 There’s an old saying about making assumptions that can prove surprisingly true regarding plants.

A prime example of this is the Brugmansia (broog-MAN-zee-ah), a plant famous in gardens worldwide but now extinct in the wild.

These gorgeous plants have large, trumpet-shaped blooms that are usually heavily scented and a wide range of leaf shapes and sizes.

But for those not in the know, Brugmansia can be somewhat intimidating.

With the seven species and three variants ranging in size up to 23’ feet tall (and the cultivars sometimes exceeding that), it’s easy to become worried about the root system and whether it can damage nearby structures.

However, you shouldn’t judge a boot by its cover nor a root system by a plant’s canopy.

Do Angel Trumpets Have a Big Root System?

Despite being trees, Brugmansia actually have a smaller root system than their canopy might suggest.

There are a lot of concerns in this regard, so let’s take a closer look at them.

The Myth of Large Roots

Look at the mighty oak, and you’ll find an even mightier root system holding it up.

This fact is one of the primary arguments people make about Brugmansia, although it simply isn’t true.

Brugmansias are smaller trees, and their roots tend to be much thinner and shorter than those of larger trees such as apple or oak.

However, due to the infamous damage done by tree roots to house foundations, sidewalks, and other structures, people are often reluctant to place their trust in a tree that’s planted too close to concrete.

The good news is that there are no known instances of a Brugmansias roots causing structural or foundation damage.

In fact, the root systems for angel’s trumpets are small enough that the trees are commonly grown in containers both indoors and out.

As mentioned, Brugmansia have big heads and small feet, allowing them to be grown in containers with surprisingly little effect on their adult size.

When planting your Brugmansia, it’s best to do so approximately 4 to 5’ feet away from sidewalks, buildings, or plants of a similar adult height.

However, this has more to do with the canopy and how low it can hang (sometimes resembling a shrub or weeping willow in many respects) than the root spread.

By sticking to that radius, you’ll ensure the roots won’t get close enough to cause any potential damage.

When digging up a Brugmansia, root spread poses an entirely different problem.

This is due to the fact that the plant must first be severely cut back, preventing you from getting any accurate estimation of the root system’s radius.

Of course, there are two ways to remedy this problem.

The first is to start about 3’ feet out from the trunk and dig further in or out as needed to find the system’s edge.

Alternatively, you can mark the ground in a radius of approximately ⅔ the radius of the canopy and adjust this distance as you dig down.

Mistaking a Datura for a Brugmansia

Once considered the same genus, Brugmansia bear a close resemblance to Datura plants, which are sometimes also referred to as angel trumpets (or alternatively, devil trumpets).

Datura can take on different growth habits and are self-seeding, which makes them somewhat invasive if not monitored.

Due to the similarity in flowers, it’s easy to see a datura plant growing out of control and think it’s a Brugmansia.

However, the two are actually easy to tell apart when in bloom, as datura has upright flowers and Brugmansias have dangling ones.

As mentioned, it’s not uncommon to grow Brugmansias in a container.

Not only does this allow the plant to be grown indoors, but many growers will have the plant outdoors during the summer and bring it in to overwinter.

Due to their relatively slow growth, a young Brugmansia will need to be repotted every year for the first few years, but will then only need repotting every two years.

During this time, it may be necessary to graduate to a slightly larger container if it appears your Brugmansia is becoming root-bound.

Thanks to the smaller root structure, it’s not uncommon for an adult Brugmansia to fit into a mere 20-gallon container.