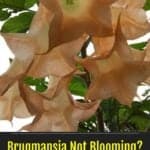 There are two reasons people grow brugmansias (broog-MAN-zee-ah). Some grow them because they know all seven Brugmansia Angel Trumpet species, and three variants are extinct in the wild.

As a result, they’re helping to conserve an entire genus, even if they’re growing one of the numerous cultivars. But the reason most people grow them is for the large, heavenly-scented flowers that give these plants and their datura cousins the nickname of angel’s trumpet.

But what happens when your precious Angel Trumpet fails to flower?

Why is My Angel Trumpet Plant not Blooming?

There are many possible factors out there that can prevent your brugmansia from blooming.

Try to rule out the most likely causes first and work your way down to the most obscure to save time and effort.

This factor is one of the most easily overlooked reasons why your brugmansia isn’t blooming.

Brugmansia cannot bloom until ones grown for seedlings mature at around 2 to 3 years old.

If you purchased the plant from a grower, chances are they have the age listed somewhere on their website.

This is also an excellent excuse to keep a record of when you germinate new plants.

Nobody wants to think of their plant getting sick, primarily since this problem is usually caused by poor care.

However, sometimes diseases happen no matter how careful we are.

There are a variety of angel trumpet diseases that can affect a brugmansia’s ability to bloom.

In some cases, these may be treated and even cured, although your plant may not bloom until next season as a result.

In the case of viral infections, the plant will almost always need to be destroyed.

All living things need to expend energy to reproduce, and this is no different with your angel’s trumpet.

Sometimes the lack of blooms is a sign it’s not getting enough nutrients.

Check for other signs of malnutrition, such as discoloration of leaves or stunted growth. Find out what causes Brugmansia leaves to curl.

You should also rule out the possibility of root rot, which can eventually prevent plants from getting food and water from the soil.

Finally, if you’re using a slow-release fertilizer, it’s strongly advised that you switch to using a liquid formula.

While the plant more easily absorbs liquid fertilizer, many gardeners avoid them because they have to be applied more frequently.

In reality, they may be applied as part of the watering regimen.

The drawback to using slow-release fertilizer is that nutrients break down at different rates.

As a result, your plant could end up with a surge of nitrogen at one point and a surge of potassium at another.

Not only can this lead to malnutrition, but it can also damage your plant or affect its growth due to the different nutrients coming in waves instead of a steady trickle.

This mainly affects container plants, but can also pose an issue when plants of the same root depth are placed too close together in the garden.

As a general rule, young brugmansia may need repotting annually, while adults will require it every 2 to 3 years.

This is a perfect excuse to check for root damage and provide fresh soil.

In the case of a rootbound brugmansia, you may need to gently separate some of the nearby plants to give your angel trumpet more legroom.

Brugmansias need about 4″ to 5” inches of rainfall per week on average.

While it can survive on less, this may stress the plant and reduce or even prevent it from blooming.

However, you also want to make sure you don’t overwater it, as this can lead to fungal disease or root rot.

A good rule of thumb is to use the soak-and-dry method of watering, whether your brug is a container plant or growing in the ground.

Simply stick your finger into the soil to check the moisture levels.

Always add the water slowly and evenly, making sure to water around the entire circumference of the plant’s roots.

Stop when the ground begins absorbing the water more slowly or when you see moisture seeping from a container’s drainage holes.

This technique is advantageous when dealing with less predictable weather because your brugmansia may need more water one week and less in another.