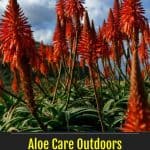 Among houseplants, aloe vera is considered by many to be king. You can break off a leaf to treat minor burns or even use it in cooking.

It also helps clean the air. Best of all, aloe vera is a “set it and forget it” plant that has a very high tolerance for neglect.

What you might not have considered is that you can also take your aloe outdoors.

Some fans of this succulent aloe species like to place containers on their deck or patio.

Others plant it in gardens where it fits a wide range of themes.

But how exactly do you get this plant to grow and thrive outside?

Growing aloe vera outdoors isn’t too different from growing it as a potted plant.

However, there are a few extra considerations due to Mother Nature’s habit of doing as she pleases.

You can grow aloe vera outdoors year-round in USDA hardiness zones 8 to 11.

In slightly cooler climates, you can also keep the plants in containers and bring them outdoors during warm weather.

There are some cultivars capable of handling direct sunlight, but regular aloe vera may suffer scorching during the hottest part of the day.

A good spot in the garden may include lightly dappled shade or direct sunlight in the morning or evening with shade during midday.

As a succulent, aloe vera is used to infrequent rainfalls and has adapted to drier conditions.

Avoid clay or other dense soils.

A good outdoor mix should be equal parts soil, aggregate (such as coarse sand or gravel), and organic material (compost, peat, etc.).

The soil should have a neutral pH for the healthiest aloe plant. If planting in a pot always use a container with a drainage hole.

Aloe vera leads a binge-and-purge life when it comes to watering.

Water the plant thoroughly in drought conditions, being sure to use distilled or rainwater.

Allow the soil to dry to at least 2 to 3” inches deep using the finger test before watering again.

However, keep in mind that nature waters your outdoor plants for you most of the time.

Aloe vera has slightly different needs than most other aloe plants.

Dilute and apply according to the instructions on the package, making a note of any nutrients already present in the soil.

However, a much better choice is to amend the soil with rich organic compost or mulch.

This will not only provide plenty of nutrition for your plants but helps protect the roots against brief, chilly weather.

There are a handful of pests that will attack your aloe vera, most of which are found only outdoors. These include:

Thankfully, all of these pests can be killed by giving your aloe plants a regular neem soil soak treatment.

Aloe rust is a common fungal infection that is generally harmless if unattractive.

New growth will usually be free of the fungus, and you can simply dispose of infected leaves as they fall off.

Basal stem rot is caused by overwatering or oversaturated soil and will slowly kill your aloe.

If caught early enough, the leaves may be clipped to just above the rotting area and propagated to give the plant new life.

The most common disease risk is root rot, especially if there are frequent or heavy rains.

Having a strong substrate of gravel or other aggregates beneath the soil will help ensure adequate drainage, but you may need to cover the plants in some weather to keep the soil from getting waterlogged.

Sooty mold is the last big problem and is usually caused as a side effect of an infestation.

Known as honeydew, the excrement is harvested by ants for food and can also attract fungal spores, especially sooty mold.

While there is no treatment for basal stem rot, sooty mold and (in some cases) root rot may both be treated using neem oil.

A neem foliar spray will kill sooty mold on contact.

Meanwhile, neem soil soaks, or neem cakes can help the plant fight off both bacterial and fungal root rot, although they’re most effective in the early stages of rot.