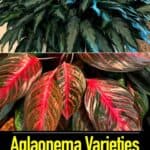 If someone mentions aglaonema (ag-lay-oh-NEE-muh), you might not immediately recognize the name, but chances are you’ve seen one before.

Commonly referred to as Chinese Evergreens, these members of the Araceae family have been found all over subtropical Asia and Indonesia.

The scientific name “aglaonema” means “point” in reference to its spearlike bracts.

Used as popular ornamental plants for centuries, aglaonemas finally made their way to the West in 1885.

While there are between 21 and 24 species of aglaonema (depending on whom you talk to), there are hundreds of cultivars out there.

Like the Dieffenbachia (dumb cane) Aglaonemas have no intolerance to cold and begin to suffer once it hits 59° degrees Fahrenheit, although a few new cultivars have been bred to be a bit colder tolerant.

In the southernmost regions of the US, these plants are used in groundcover, landscaping, mass planting, and shade gardens.

However, they are most often grown as indoor plants and stand-alone specimens or planted in beds.

Most cultivars are variegated, so while they will handle full shade quite easily, you may wish to give them partial sunlight or the dappled sun to make the colors more vibrant.

However, these plants grow on forest floors, so you should never leave them in direct sunlight.

Traditionally, the plant has been considered a source of good luck.

Today, they are better known as clean air plants, with Aglaonema modestum is listed in the NASA Clean Air Study as effective in removing benzene and formaldehyde from indoor air.

It should be noted that aglaonema plants have a high calcium oxalate content, making them toxic to both humans and pets.

The sap has also been known to cause rashes and other skin irritations in some individuals, so keep these plants somewhere away from small hands and paws and wash after handling.

There are dozens of different aglaonemas out there, and as many “most popular” lists out there, each one is very different from the next.

The following list includes well-known varieties and some that are less common but popular among collectors to give a more rounded perspective.

One of the newer aglaonema cultivars, ‘Calypso,’ has upright stems which arch outwards to produce a lush appearance.

This sport has a much higher cold tolerance, surviving temperatures down to 30° degrees Fahrenheit.

The glossy, twisting leaves have an oblong shape and are dark green with golden yellow variegation.

It’s a moderate grower, reaching between 24 and 36″ inches in height once it matures.

A natural shade lover, ‘Calypso’ can often be found in hotel lobbies and other places where it adds a beautiful bit of color and life.

This species of aglaonema hails from the Philippines and northeastern Celebes, preferring a home with higher humidity.

It’s very similar in appearance to Dieffenbachia (AKA dumb cane) but has only 5 to 8 main lateral veins.

Its ability to thrive in dappled sunlight, indirect light, or shade makes it an excellent choice for a filler plant or indoor spaces with poor access to sunlight.

The leaves are lanced-shaped and dark green with lighter silver-green to burgundy veins.

As the leaves can measure between 4 to 8″ inches long, 2 to 3″ inches wide, and fans out from a central point, they create a statement without becoming too dense.

This allows a nice view of the stems, which have silver-grey blotches.

While not common, commutatum has been known to bloom indoors, presenting a white spadix in a greenish-white spathe sometime in late summer to early fall, followed by clusters of red berries.

Earning its name from the long, lance-shaped leaves, ‘Cutlass’ is a real conversation starter.

The foliage is a variegation of pale silver-green with dark green primarily along the edges and central vein, giving it great contrast.

Growing only 19 ⅔” inches tall, this plant is perfect for smaller spaces such as office desks or countertops.

It’s also a slow grower with short, clustered stems that give it a lush appearance without requiring constant pruning.

‘Gemini‘ is one of the taller aglaonema varieties, reaching as much as 4′ feet tall and 3’ feet across when mature.

It’s a slow grower and will last as long as 10 years, making it great for lobbies and other large indoor spaces.

Its speartip-shaped leaves are a rich green with creamy white variegation.

Hints of chartreuse may also be found on the leaves, and the plant fares well in almost any light setting outside of direct sunlight.

‘Maria’ has dense, lance-shaped leaves that allow it to easily compete with the most popular large-leafed houseplants.

It has deep green foliage with a pale green to cream variegation that’s dull enough to handle very poor light conditions without losing its colors.

One of the most popular aglaonema varieties due to its ability to help remove toxins from your home, Aglaonema modestum is also cherished for its foliage.

The plant has white striation on its large, waxy green leaves and pale green stalks, which provide even more contrast.

The variegated leaves could give Marble Queen pothos plants a run for their money while boasting a glossy sheen and the ability to thrive in far less light.

Its stalks emerge from a central point, allowing the foliage to fan out as they get higher.

Interestingly, this rare non-variegated variety does have a variegated form that closely resembles pothos ‘NJoy,’ making it a great alternative.

Be careful sticking Aglaonema pictum tricolor cultivar in your garden, or it might just disappear!

The leaves have a beautiful, natural camouflage pattern of an almost creamy green, medium green, and dark green.

The large ovate leaves have irregular edges, making them blend in even further when placed in dappled sunlight.

Sometimes called the camouflage plant for obvious reasons, Aglaonema pictum Tricolor is a slow grower that can reach 12″ to 20″ inches tall once mature.

It’s the rarest and most expensive aglaonema cultivar on this list, but experienced owners can propagate Chinese evergreen plants through stem cuttings with enough care and effort.

Growing up to 24″ inches tall, Aglaonema rotundum is very different from its siblings.

This native of Sumatra has large, elliptical to round leaves that sport thin, pink stripes on a dark green backdrop.

The nearly vertical stems allow the sparse foliage to stand out, as the leaves droop nearly horizontal in a spread of 12 to 18″ inches across.

The combination of large leaves and good spacing makes this an excellent choice for shelves and bookcases.

‘Siam’ is one of those cultivars that’s more known for the many sports created from it than the primary cultivar itself.

Whether you go for ‘Siam red,’ ‘Siam pink,’ ‘Siam jade,’ ‘Siam aurora,’ or stick with the basic version, this is one plant with a variegated leaf of pink colors that’s sure to please.

It can grow up to 18″ inches tall with clustered, vertical stalks and narrow, ovate green leaves with a distinctive red margin.

Unlike many other varieties, ‘Siam’ needs bright, indirect sunlight to maintain its coloration and occasionally produce flowers.

It’s a relatively slow grower, making it easy to maintain despite the higher light requirements.

This plant is a real treasure that can grow with little maintenance but rewards you for doting on it.

When grown in more ideal conditions, this fast grower will produce a new leaf nearly every week.

The variegation of ‘Aglaonema Silver Bay‘ can vary greatly from one leaf to the next, with the silver and light to dark green vying for attention.

Each oval-shaped, glossy leaf unfurls from the central stalk, reaching up to 12″ inches long.

Placed in bright, indirect sunlight, the plant will truly shine, although it can also grow in full shade.

A close relative, ‘Emerald Bay,’ has darker silvery-green variegation and will hold its colors in much lower light settings.

Winner of the Royal Horticultural Society’s Award of Garden Merit, ‘Silver Queen’ is the most commonly found cultivar and perhaps the most popular among aglaonema fans.

It can grow up to 24″ inches tall, and the stem clusters result in a very lush variety.

It can also tolerate low and moderate light, making it a good choice for dorms and offices.

This is also a good replacement for many varieties of pothos and philodendron when conditions are less than ideal.

‘Silver Queen’ is sometimes referred to by the alternate name of ‘painted drop tongue.’

It also has a sibling, ‘Silver King’, with fewer stripes.

Of course, we only have room for a handful of aglaonema varieties here, but we’d be amiss if we didn’t at least mention some other great varieties.

Here are some other popular choices to keep an eye out for: