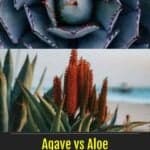 Aloe plants and agave plants look quite a bit alike, but they are very different in many ways. Often, you may encounter these plants in home improvement garden centers, big-box stores, and the like, and they may be improperly labeled or not labeled at all.

So how can you tell one ornamental plant from the other? In this article, we describe the differences between Aloe plants and Agave plants.

Although Agave and Aloe are pretty different now, they were once related in prehistoric times. Although they still look quite alike, agave and aloe plants come from very different places today.

Aloe plants hail from Madagascar originally and have spread throughout the Mediterranean. As the plant spread, different varieties developed. As a result, today, there are types of Aloe that grow very well in cooler winters, while others do best in tropical settings.

Agave hails from Central America, the American Southwest, and Mexico. It is a desert plant.

Agave and Aloe both do well in relatively dry and sunny conditions. Both Aloe and Agave can adapt and grow in various parts of the world as long as they receive the care they need.

Both types of plants like to have light, airy, sharply draining soil.

Both types are drought tolerant and do well with the soak and dry watering method.

For example, aloe vera is used as a medicinal plant in many different situations. Its fleshy leaves contain a gel effective in personal care products and as a treatment for minor skin irritations, burns, and the like.

Aloe is non-toxic, but you should take care not to allow pets or livestock such as goats, donkeys, horses, and cattle to eat it because the exterior of the leaf can be toxic to them.

The varieties of Agave plants, on the other hand, contain a sap that can be quite irritating to the skin and toxic when ingested. In addition, agave plants are used to make rope and similar rugged textiles because they have very fibrous leaves.

Aloe plants also produce juice that is nutritious and medicinal. Aloe juice can be added to other types of juices, used in cooking and smoothies, and so forth.

On the other hand, Agave can cause severe irritation to the mouth, throat, and stomach if ingested. The heart of the agave plant can be used to make tequila, but it must be intensively processed to make it relatively safe.

How Can You Tell Aloe From Agave?

It’s important to tell these two types of plants apart because misusing the plants can have dangerous and even deadly results.

One way to tell Aloe and Agave apart is by their blooming pattern. Aloe is polycarpic and blooms year after year with multiple flowers. An aloe plant typically lives about a dozen years and blooms annually.

Agave is monocarpic and only blooms once in its lifetime. After it blooms, the plant dies. However, agave plants are quite long-lived. Some can live as long as one hundred years, which explains their common name, Century Plant.

When agave bloom, they do so atop flower stalks that can be as tall as 20 feet.

There is some liquid in the leaf, but agave leaves are mostly very tough and fibrous. Additionally, many agave leaves have dangerously sharp edges.

Most of the time, agave plants are much bigger than aloe plants. Some types of Aloe, such as the Tree Aloe, are larger than an agave; however, these types of plants are quite unusual. Therefore, you are unlikely to encounter a Tree Aloe.

Although Tree Aloe can grow quite large, you can typically tell them apart from Agave by the many other differences between the two plant types.

Generally speaking, Agave is quite a bit larger than aloe plants when they are mature. Many types of Aloe can do quite well as a houseplant in a pot or container. Agave will typically outgrow this sort of setting.

Consider The Time Of Year

To determine what type of plant it is, see what the plant is doing at a given time of year. For example, the time of year aloe and Agave grow differs.

Aloe likes to grow during cool weather. When the weather begins to warm up, the plant blooms. For this reason, you can usually count on your aloe plant to bloom very late in the wintertime or very early in the springtime.

To encourage this, you should continue watering your Aloe during cool weather but water judiciously to prevent root rot.

How Are Agave and Aloe Leaves Different?

Generally speaking, Aloe has thick, fleshy, succulent leaves. However, if you squeeze an aloe leaf, it may feel soft or even spongy. This is because it is filled with gel. If you try to break an aloe leaf, you’ll be able to break off a piece pretty easily. When you do, you will see the gel inside the leaf.

Furthermore, you’ll need to be careful because the margins of agave leaves tend to be dangerously sharp.

Inside agave leaves, you will find very tough fiber. This fiber is very useful for making rope, rugs, and other sturdy textiles.

You are unlikely to hurt yourself touching an aloe leaf, but you are quite likely to do so when you feel an agave leaf.

How Are Agave and Aloe Similar?

Agave and Aloe are often similar in appearance, shape, and size, and they like the same type of climate and care. In addition, they are often quite similar in color. Deep green or dusty blue-green is common for many species of both types of plants.

Both of these types of plants have long, lance-shaped, spiny leaves that originate from the center of the plant. Both plants tend to grow close to the ground; however, some aloe plants grow as trees, and some agave plants are quite large and towering.

Aloe flowers and agave flowers may look alike, but they differ greatly in the blooming frequency and the size of the blooms. Both Aloe and Agave produce their flowers atop tall stalks that emerge from the plant’s center.

The length of the stalk and the color of the flower vary from one type of plant to another. However, the configuration of stalks and flowers is pretty much the same between Aloe and Agave.

The stalks are tall and stand above the plant. They produce bell-shaped or tubular flowers in shades of:

The big difference in blooming is that Aloe is polycarpic. So they bloom every year throughout their lifetime, which is about twelve years.

Agaves are monocarpic. They bloom one time in their lives, usually when they are between 10 and 30 years old.

For this reason, if you see a plant of this type in bloom, this can be a clue that the plant is an aloe. Examine it more closely to determine whether or not it is an agave.

What Is False Aloe?

In some areas of the southeastern United States, you may encounter a commonly known plant as False Aloe. This plant illustrates just how easy it is to confuse Aloe and Agave. It is neither Aloe nor Agave, yet it has a history of being mistaken for both!

The plant is a member of the asparagus or Asparagaceae family. False Aloe’s scientific name is Manfreda virginica, although it used to be known as Agave virginica. It was formerly thought to be an Agave or a member of the Agavaceae family of plants.

False Aloe is a perennial plant that grows between 2″ and 16″ inches tall in a rosette formation. Its leaves are flat, fleshy, sword-shaped, and green. The plant does not have spines or sharply edged leaves.

This plant grows flowers on a 6′ foot long, flexible, leafless stalk, rather like that of a Spider Plant, also a member of the Asparagaceae family of plants. The flowers are greenish-yellow, tubular, and about an inch long.

False Aloe blooms from early in the summer through mid-autumn. At the end of blooming bloom time, the plant produces small, round seeds.

In Missouri, three more Yucca species are related to False Aloe and could easily be mistaken for Aloe or Agave. You may hear all of these types of plants referred to as:

Again, this plant is neither Aloe nor Agave, yet plant experts have mistakenly identified it as such in the past, so take great care to make a correct identification as you go about collecting Aloe and Agave! If you have any questions regarding identity, take the time to double-check before making any use of the plant.