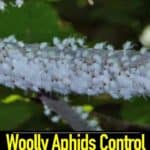 Woolly aphids are one of over 4000 different types of aphids which may plague your garden. These aphids differ mostly in appearance from others.

Like all aphids, these insect pests are tiny, usually growing no larger than a quarter inch long. Like their many cousins, they cause damage to plants by sucking out the sap.

Woolly aphids are typically greenish or bluish in color, and true to their name, rather fuzzy.

Their covering of a waxy, white material gives them some protection against the elements, and in some cases against pesticides.

The Woolly aphid typically has two hosts in their lifetime.

One used for overwintering and egg laying. The other used for feeding in the summer and the spring.

You’ll usually see these aphids assembled in groups. If you find a still, cottony mass on twigs, buds, leaves and/or branches of your plants, suspect woolly aphids.

They may look like mold when undisturbed. You can test this by tapping beside the mass. If they are woolly aphids, they will immediately begin to twitch and wiggle.

What Damage Do Woolly Aphids Cause?

Luckily, their populations usually stay quite small and don’t do a lot of damage.

On rare occasions when the aphid population gets out of control, as the aphids feed the leaves may curl and become distorted. The aphids also leave their calling card of honeydew accompanied with sooty mold.

When they aphids suck the sap from plants, it causes the foliage to twist, curl, yellow and die. Sometimes a woolly aphid infestation can cause growths known as galls or cankers on the roots or limbs of their hosts.

Another indication of aphid infestation is an increase in the ant population.

The accumulation of wax and honeydew, their sweet, sticky excrement, is very attractive to ants.

A coating of honeydew can quickly turn into sooty mold.

This ugly black fungus causes plants to look like they are covered in soot.

The sooty mold does not damage plants, but a thick coating of it can block light and interfere with photosynthesis.

Lack of light will damage your plants.

How Can You Control Woolly Aphids?

Maintain an integrated pest management strategy (IPM) to keep aphids and other pests under control throughout the growing season.

One of the best ways to keep aphids away from your plants is to keep your plants healthy. Be sure to keep the nutrients in the soil balanced, and avoid having an excessive amount of nitrogen in the soil because this attracts aphids.

Use natural, organic fertilizers such as fish emulsion, decomposed manure, compost, liquid seaweed or other natural materials that release slowly into the soil. This helps maintain a consistent balance and avoid spikes in nitrogen levels.

Do your heavy pruning during the middle of the growing season. Pruning is an excellent way to remove aphids from the plants naturally.

Prune moderately throughout the winter months and early springtime.

Be sure to deadhead flowering plants regularly to encourage more blooms.

More blossoms encourage the presence of:

… and other natural predators as well as pollinators such as butterflies and bees.

When you see a congregation of woolly aphids, treat them locally using neem oil or insecticidal soap spray or a white oil spray.

For large infestations, consider pruning away the affected branches and dispose of them carefully.

Place the affected branches in a plastic bag, seal it up and set it in the sun until collected on garbage day or burn the limbs.

Some choices in chemical and natural pesticides effective against aphids include:

Generally speaking, woolly aphids can be controlled in a very localized manner because their numbers are usually quite small, and they tend to gather in clusters.

The best time to deal with woolly aphids and other aphids is when they initially appear.

Examine plants carefully early in the growing season. Deal with aphids locally by wiping them off with a paper towel soaked in rubbing alcohol or by spraying them forcefully with water.