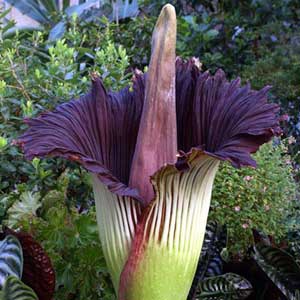 What Is The Biggest Flower In The World? It’s a question many of us have wondered about but never really looked in to. With “flowers” as tall (9 feet) as they are wide the titan arums are the giants in flowering plants. They smell awful!

Recently, at the New York Botanical gardens this rarity attracted thousands of visitors to the garden as well as online so people could see this rare spectacle which has not flowered since 1939.

“The influx of thousands of people towards the New York Botanical gardens is very understandable. Something that hasn’t happened for decades is about to occur! And despite its repellent and grotesque stench, its attraction due to its rarity is astonishing.

You can judge its rarity from the fact that it’s has been more than 80 years since the New York Botanical Gardens has had a fully bloomed corpse flower. Because of this reason, Botanical gardens around the country and many private collectors cultivate the plants while counting days to their blooming.” Via wonderfulengineering.com

I’ve grow several varieties of these “stinky” flowers and they do smell.

Check out the video below by Sir David Attenborough made while filming of the Private Life of Plants series.