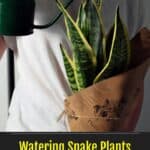 Snake plants have suffered a significant blow in recent years. This is because their genus (Sansevieria spp.) was genetically similar to the Dracaena genus.

This similarity resulted in one of the most common botanical categorization methods, and many botanists and online sellers decided that sansevierias should be merged with and renamed dracaenas.

The problem with this decision is that sansevierias and dracaenas not only look different, but they have very different care needs.

Thus, those who weren’t already used to growing snake plants began killing their plant by treating them as dracaenas.

Meanwhile, most long-time growers have refused to accept the new naming and continue to use the name sansevieria proudly.

One of the most significant issues that arose from this renaming debacle is that it became more common for snake plants to be overwatered or underwatered.

So how often should you water a sansevieria, and how do you know when you’re giving it enough?

How Often to Water Snake Plant?

Snake plants need fairly frequent watering, but only if the soil is dry 1″ inch down.

Read on to learn the common mistakes made in watering these beautiful plants and how to ensure you always give your plant what it needs when it needs it.

Why You Should Never Water on a Schedule?

Just about all of us have been taught from a very young age that you should give plants a certain amount of water every X number of days.

However, this is a major fallacy and is one of the biggest reasons plants suffer from improper watering.

Think about this: When you get thirsty, do you take a drink until you’re satisfied?

On the other side of the coin, do you have an alarm set to tell you when to drink and always drink a specific amount?

You said yes to the first question and no to the second.

Plants are very similar to people and get thirsty when they get thirsty.

Many factors, such as humidity, temperature, and sunlight intensity, affect how quickly the soil dries out or how much the plant transpires.

Transpiration is a function similar to sweating that plants do to increase the humidity around them and accounts for more than 97% percent of the water a plant absorbs.

Thus, by giving your plant-specific amounts of water on a calendar basis, you can easily share the plant with too much or too little, resulting in severe consequences for the plants.

The Consequences of not Watering Properly

Giving your plants too much or too little water may not result in immediate side effects, but they can harm your plant over time.

Here are some of the consequences your plant may face beyond the more obvious symptoms, such as yellow or brown leaves.

Overwatering is one of the worst things you can do to a plant.

The excess water can cause fungal infections in the soil or plant itself.

It can also lead to edema in many plants, which is a disease where water blisters grow and burst, leading to rot.

Overwatered plants can attract infestations by piercing insects that feed on plant sap and fungus gnats (which feed on fungi and can also destroy roots).

Most importantly, overwatering can lead to root rot, a condition caused by several strains of bacteria and fungi that destroy the roots and lead to plant-wide decay.

Underwatering may not have the same drastic effects as overwatering, but it can still eventually kill your plant.

An underwatered plant will be unable to transpire, which may also negatively affect photosynthesis.

It can also increase the risk of chemical burns from fertilizing.

Furthermore, dry plants are at a higher risk of being affected by sunburn or extreme temperatures.

Benefits of the Soak-and-Dry Method

The soak-and-dry method may not work for all plants, but it can benefit most plants both in the garden and in the home.

This method requires straightforward observations to tell when the plant is thirsty and when it’s had enough water.

This eliminates the risk of both overwatering and underwatering the plant, and there’s even some leeway with many plants that allow you to miss a few waterings without putting the plant at risk.

This leeway is based on the root structure, as some plants with shallow roots will need to be watered more often than those with deep roots.

You can spend a small fortune on fancy tools to judge how dry the soil is, but the soak and dry method tends to use something far cheaper – your finger.

The index finger on an average-sized human hand measures approximately 1″ inch long from the tip to the first knuckle.

If you have larger or smaller hands (like letting your kids water the plants), you can stick your finger beside a ruler to see how much finger equals an inch.

Once you know, it’s easy to memorize this distance, making all of those expensive tools unnecessary,

To use the finger method, stick your finger straight down into the soil.

If the dirt is dry, your finger won’t attach to it, and it will seem lighter and dustier than usual on your finger.

If the soil feels dry down to a certain depth (which can vary from one species or cultivar to another), it’s time to water.

And if it’s still damp within that depth, the plant doesn’t need to be watered yet.

For snake plants, the target depth is 1″ inch, but if there’s a tiny bit of moisture on the very tip of your finger, that’s close enough.

Once you’ve determined the soil is dry to the correct depth, it’s time to water your snake plant.

You’ll want to use room-temperature water to avoid temperature shock, and it’s best to use distilled water or natural rainwater.

But the real trick to this method is to pour slowly, so the soil has time to absorb the water.

You can use a cup or small watering can to pour slowly for as long as you remember.

When you first start pouring, the soil should immediately absorb the water, so if it isn’t, run slower.

Work your way around the plant, evenly covering the soil without getting the plant itself wet.

There are two clear signs that the plant has had enough water.

The sign that will work for indoor and outdoor plants is when you see the soil no longer absorbing water as fast as you’re pouring.

This is a clear sign that the soil has been saturated, and continuing to water will result in overwatering.

The second sign only works on potted plants such as your snake plant.

When you see water beginning to seep from the drainage holes of the plant’s container, you know the soil has been saturated, and the leakage is any excess.

For both signs, stop watering when you see them, and your plant will have just the right amount of water every time.