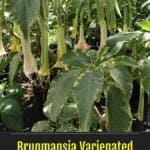 The first thing most people picture when Brugmansias (broog-MAN-zee-ah) are mentioned is the unbelievable 6″ to 15” inch or longer trumpet-shaped blooms.

But those who have grown Angel’s trumpet indoors know a little secret: the foliage of these plants cannot be underestimated.

Each of the seven species and three variants has its own take on how leaves should appear, and the hundreds of registered cultivars take this liberty even further.

As a result, you can find Brugmansias leaves to be a wide range of shapes and sizes, all of which are attractive.

But with these plants extinct in the wild and now reliant on human cultivation to survive, picky plant growers may be looking for something a little extra in their foliage, such as variegation.

Is There a Variegated Brugmansia, and Does it Need Different Care?

The answer to this question is a resounding yes, followed by a more lackluster “it depends”.

Cultivars tend to follow the same requirements as their ancestor species or variants, but sometimes there are a few slight tweaks needed to ensure proper care.

Brugmansias and their cultivars fall under two groups.

The warm group is highly intolerant of cold and best planted in USDA hardiness zones 10b to 12.

Almost all cultivars in the warm group come from the variant Brugmansia x cubensis, a natural hybrid of three warm group species.

The cold group grows best in USDA hardiness zones 9b to 11, although it will tolerate zone 12 with some light afternoon shade and a little extra care.

It can often be difficult to find out if a cultivar belongs to the warm group or cold group, so you may have to look up individual care information for each plant.

Brugmansias prefer at least 6 hours of full sun but have their limits when it comes to intensity.

They can normally tolerate light to partial shade, and you should provide them with dappled sunlight or light shade in the afternoon if you live somewhere with a particularly harsh midday sun.

Variegated plants have the same light tolerances, but you will need to ensure they get a little more sun exposure, as the variegation will fade if the plant doesn’t get enough light.

Again, the exact amount of light will vary from one cultivar to the next, but a good rule of thumb is to ain for around 8 hours of full sun or augment an indoor brug with a grow lamp.

The following are some of the most popular variegated cultivars out there but are by no means the only ones available.

The vast majority of Brugmansia cultivars are candida descendants, but there are some cold group variegations out there if you look hard enough.

This warm group cultivar is based on the variant Brugmansia x candida and is a sport of the cultivar’ Angels Flight’.

Introduced by Anne Kirchner-Abel in 2006, the leaves of this plant are green with slightly lighter green splotches that tend to take up ⅓ to ½ of the leaf surface.

Its flowers range from apricot to melon or peach in color, providing a beautiful summer contrast.

A sport of the warm group cultivar ‘Apricotqueen’, this lovely plant was introduced by Herrenhauser Garten in Germany sometime around 2003 and has made quite the impression.

The blooms range from apricot to melon or peach, while the dark green leaves are covered in patches of white or cream that often follow the margins.

Carrying on the typical apricot-melon-peach blooms of a candida descendant, this cultivar is sometimes known as ‘Grazie’ and should not be confused with a non-variegated cultivar once bearing the same name (which is now known as ‘Kurpark Bad Salzschlirf’).

Another candida-based cultivar, this plant has a similar appearance to ‘Apricotqueen Variegated’, only the white, cream, to gold accents tend to follow the margins and invade between veins as opposed to the more splotch-like patterns of the other cultivar.

This lovely warm group cultivar is a little different from the competition, bearing pink funnel-shaped blooms most commonly associated with Brugmansia insignis.

The leaves are ovate and dark green with white to cream variegation along the margins.

This mysterious warm group cultivar was discovered hiding in a French nursery.

The leaves are dark green, usually with white or cream accenting the margins.

However, it has also been known to spontaneously produce a sport called ‘Axelrose’, which has a more camouflage appearance with cream and light green.

There have been some arguments that the cultivar should be renamed to ‘Maja’, but this has since been rejected.

Meanwhile, it’s sometimes sold as ‘Sunset’ despite this being the name of a different, non-variegated cold group cultivar.

This sport of ‘Greenbank’ was developed by Alice Harris in 2003 and is similar to many other candida-based cultivars.

The leaves are a typical dark green with white to cream along the margins.

Patented by Terra Nova Nurseries in 2002, the lineage of this cultivar is unclear, but it’s widely believed to be a tetraploid sport of ‘Maya’.

The leaves have a slightly bluish tinge and often have multiple shades of green.

White to cream heavily coats the margins, while the flowers shift from cream to apricot as they age.

This spectacular sport of ‘Mia’ was introduced by Alice Harris in 2005 and lives up to its name.

It has scalloped dark green leaves with heavy breaks of lime throughout.

The flowers are equally impressive, beginning with a creamy color that darkens to apricot as the blooms age.