When great-grandma grew flowers one or two varieties of hardy chrysanthemums were about all she had. There just weren’t many varieties for her to select from.

Plus she had to protect them like a new baby because they bloomed so late in the fall they often were killed by an early hard freeze.

How different it is today! You have your choice of hundreds of good Chrysanthemum varieties, some blooming as early as late August, and practically all before the first of November.

Today hundreds of new varieties are offered by commercial growers each year – they change almost as rapidly as styles in women’s clothes.

Chrysanthemums have a very interesting history. Their long name, which so many find hard to spell, came from the Greeks and means this: chrysas for “gold or golden,” anthas for “fiower.”

The common American name for them is short and easy to spell, simply “mums.” They are natives of Asia, Persia and North Africa, but China first improved their blooms over 1600 years ago, away back in 330 A.D.

America was too busy starting a new nation and did not learn of them until the Massachusetts Horticulture Society announced an exhibition for the first time in 1830.

For many years after that, not much thought was given to mums in the United States until a Mrs. Alphes Hardy, in 1888, sold at auction a “hairy or ostrich plume type chrysanthemum” for $1,500.

Then Chrysanthemums spread like wildfire all over the United States through the publicity of the big price her mum brought. Today millions of dollars are invested in commercial greenhouses all over the country and mums are the second largest crop grown in them.

Growers have developed them as a year-around flower instead of one to enjoy only in the fall months.

The home flower grower is more interested in growing them to beautify their home landscape. The rest of this article will be the most important information helpful to the amateur grower.

Gardeen mums can be grown in any good garden soil, provided it is not soggy wet. They dislike wet feet and hate lime, preferring a well-drained soil on the acid side.

The addition of finely ground peat moss will help to make a right acid soil condition. Heavy clay soil can be mellowed by a liberal addition of common sand and manure. 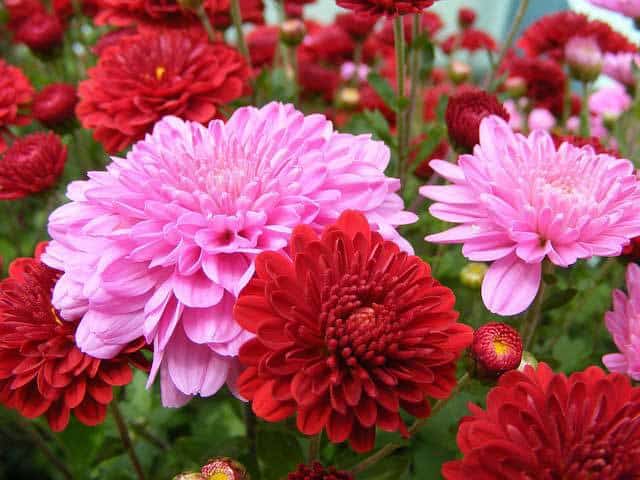 Mums like plenty of plant food and to all soils you can add manure when making a bed for the first time. Feed them along during the growing season until the buds start, with a complete fertilizer rated about 4-10-5. (That means 4 per cent nitrogen, 10 per cent phosphoric acid and 5 per cent potash.) Most growers use slow-release fertilizers to feed their plants.

Follow directions on the bag closely. Be sure to water heavily when feeding, after first working fertilizer into soil so it can get quickly to the feeder roots. Remember mum roots are shallow, so be sure to cultivate without disturbing the roots.

Water heavily during the growing season until blooms show color, especially during a summer or fall drought. Lay the hose on the ground, turning the water on lightly, and let them soak well – drip irrigation is perfect.

Then do not water for about a week. A little water just sprinkled over the tops might do more harm than good and start a fungus disease on the leaves.

Sometimes black or green aphids will attack young mum plants. They can be controlled by spraying with neem insecticide. If you have fungus on the leaves you can keep it in check by dusting with powdered sulphur. Those are about the only troubles you may ever have with mums.

I have had many flower lovers tell me, “I can grow nice mums the first year. Then the next few years they die out or have only little, dinky flowers.

Why does that happen?

The answer is easy. Mums must be divided each spring if you want large blooms every year. You can easily divide the entire clump into small plants so that some roots are on each division. Discard the old centers of plant stalks.

If possible, change the location each year, or change the soil should you be crowded for room and have to replant in the same spot. Water the plants well when replanting and be sure to reset in a shallow hole because mums do not root deeply. For the first ten days your new plants will not seem to grow at all, but soon they take on new life and grow quite rapidly.

The cushion types are low growing and do not need pinching back. All other types would get tall and fall over, so when the plants are about eight inches tall, pinch out the center growth to cause them to branch out and make a sturdy and bushy plant. Pinching also increases the blooming surface and reduces the need for staking.

Mums should be planted at least 18 inches apart. Some folks plant some in their vegetable garden for cut flowers, and put the rest close to the house for display purposes without cutting.

If you can, plant on the south side of the house or garage where they will get at least 3/4 of the day in sunshine. Never plant in entire shade, or close to trees or shrubs, because the roots of trees and shrubs will rob them of the food and moisture they need so badly when they are producing flowers.

Most hardy mum flowers can withstand light frost (white flowers are easiest damaged) , but if wet with rain when a hard freeze comes they could all be greatly damaged. A large box placed over each plant will protect the blooms from a killing frost.

The English type mums are very pretty but have a habit of blooming late in the latitude of Kansas City where October 25 is the average killing frost date. For these and any other late bloomers you can dig the entire clump carefully, wetting them good so the earth clings in a large ball.

Do this before heavy frost and pot in a large pot with bottom drainage. Water heavily again when potted, place in your garage or other protected shaded place for two or three days, and then bring them to a sunny warm window of your home where they will soon bloom out. After they are through blooming, reset them in the open ground. The average basement is too hot and dry to winter mums.

Mums can be mulched with grass clippings during the summer to keep the soil cool over their roots and conserve moisture. For winter mulching, the best thing one can use is branches from your discarded Christmas tree. First cut off all the old mum stems.

Do not place the winter mulch over plants until the ground is frozen hard. One could also use leaves but not too heavily because such mulches have a habit of packing and might smother the tiny baby plants that are right at the surface of the ground.

Different types of mums are cushion, single, anemone, pompon, reflex, in-curved, spoon and spider. The cascade type are used nicely for hanging baskets. All mums come from the composite flower family, the same as the wild meadow daisy.

They can be propagated by seeds, divisions or by rooted cuttings. Seedlings are often disappointing because most of them revert to singles that are not at all pretty.

Propagation by cuttings is quite satisfactory. provided one has a cool greenhouse and complete equipment to root the cuttings. For the amateur, I suggest using the division method as the quickest and least work.

Hardy mums are lovely, long-lasting cut flowers, just break the stems from the plant, strip off the bottom leaves and place in a large, deep vase with plenty of fresh, cool water. Change that water every three or four days, breaking off a small piece of the stem at the bottom.