There are approximately 2000 different species of Tiger Beetles, all belonging to the order, Coleoptera.

You will find the Tiger Beetle all around the world, and about 100 different species in North America.

These helpful predatory beetles live in a wide range of settings from woodland areas to salt flats to the seaside, lakeshores, and riverside settings.

If you find them in your yard and garden, you are lucky, indeed. 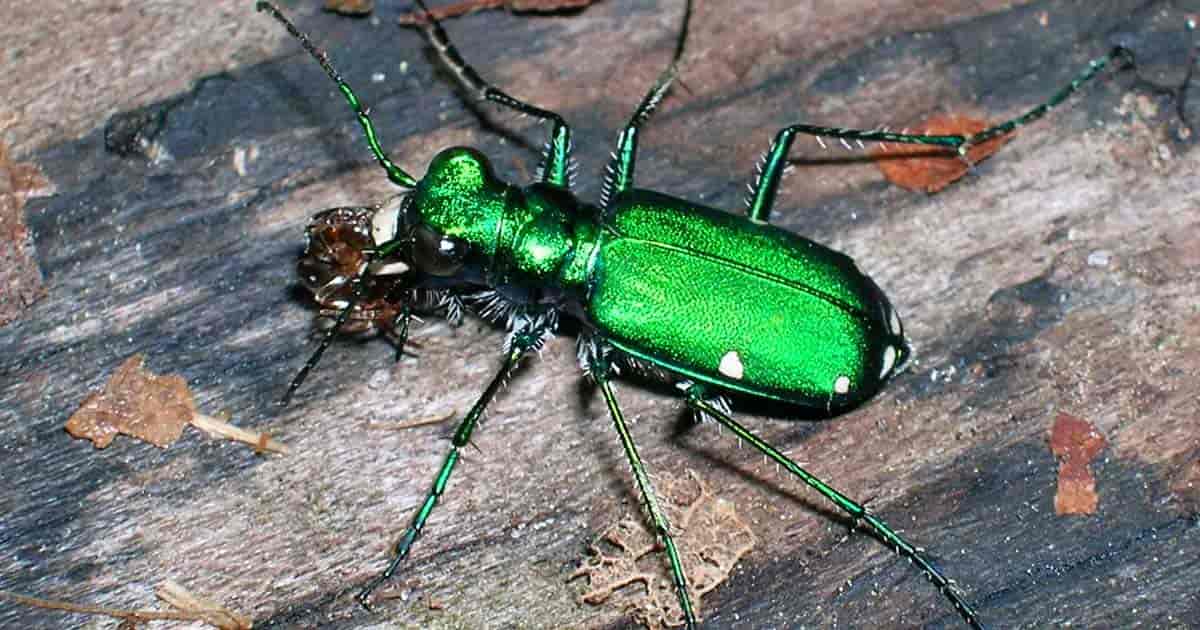 What Are Tiger Beetles?

They are related to ground beetles, but Tiger Beetles differ slightly.

A Tiger Beetle’s thorax, the area between the abdomen and head of the beetle, is narrower than its head.

This is different from ground beetles.

Common species are grayish brown to black with white spots and markings on the wing covers.

Because of the variety of different species, their appearance ranges widely.

The type of Tiger Beetle you might find in your garden is dependent very much on your location and the type of vegetation grown.

Some of the more common Cicindela Spp. varieties include:

Tiger Beetles come in colors ranging from dull brown or black to iridescent purple and green.

They may be spotted, striped or with mottled markings.

They are colored in a way to allow them to blend in with their surroundings.

As adults, Tiger Beetles are about a half-inch long.

They have large eyes, and their mandibles long and sharp.

Their antennae are also quite long.

Adult Tiger Beetles have a wide head, a narrow thorax, and a streamlined body.

Their legs are spindly and long and allow for rapid locomotion.

Where Can You Find Tiger Beetles?

The mature beetles frequently sun themselves in the garden, woodland paths or wetland settings.

You need sharp eyes to see them though.

They are fast runners, and also very alert.

They don’t like to be disturbed and will quickly fly or run away when they see you.

There are species of Tiger Beetles who like to be out at sunset.

These species tend to hang around porch lights, streetlights and other sources of artificial illumination seeking out bugs, spiders and other prey.

Tiger beetles occur on most continents.

In the United States, they are found in sandy open habitats, including river sandbars, ocean beaches, mudflats, clay banks, and sand dunes.

What Is the Beetle Life Cycle?

Tiger Beetles overwinter in vertical burrows and emerge late in the spring.

They begin mating right away and mate multiple times throughout their active season which usually runs June to August.

This period accounts for the last few weeks of the Tiger Beetle’s lifespan.

During this time, female beetles lay three or four eggs daily and mate with multiple males.

The female beetles are quite picky when choosing sites to lay eggs.

They look for damp soil or sand and dig small holes in which they deposit single eggs.

Once the egg is deposited, the female beetle covers it to prevent predation.

Within a few weeks, the eggs hatch into Tiger Beetle larvae or grubs.

Larvae may go through several instars or phases before they pupate and become adult beetles.

This can take four years depending on the availability of food and the climate.

Adults emerge from pupae in the early summer and are active during the summer months.

As soon as a Tiger Beetle larvae hatch, it begins digging a burrow where it will dwell until its final instar.

These burrows are quite large and extensive up to a foot deep and finished nicely with hard-packed soil or sand.

The immature beetles work hard loosening the soil or sand with their long mandibles and carrying it out of the burrow for disposal.

They use their head and thorax in a shovel-like manner to accomplish this.

Once built, the Tiger Beetle larva sets itself up in the burrow to wait for prey.

These larvae have hooks at the back of the abdomen they use to anchor themselves just inside the burrow entrance.

Here they wait until unsuspecting prey ambles by, then they leap out, grab it and drag it back into the burrow.

What Does The Beetle Larvae Look Like & What Do They Eat?

The larvae are quite unlovely.

They are large humpback grubs with flat heads and sharp, powerful jaws.

They spend all their time waiting for food and will eat any small insect, arachnid or gastropod happening to wander past the burrow entrance.

The fastest known species of tiger beetle, Cicindela hudsoni, can run at a speed of 5.6 mph or about 125 body lengths per second.

After securing its prey, it injects it with digestive enzymes helping to break it down.

A Tiger Beetle grub will eat all manner of insects:

… and even some other beetles.

When it’s time for the Tiger Beetle larva to move into its pupal stage, it plugs up the entrance to its burrow.

As a pupa, the grub rests for as long as a month.

When it emerges from the pupal larval stage, it waits three days giving its exoskeleton a chance to harden up.

When it emerges from the burrow, it will still be somewhat soft and pale making it easy prey for other predatory insects.

Adult Tiger Beetles sometimes hunt for prey like the larva, but their choices of vantage points are much greater.

Tiger Beetles sit perfectly still watching and waiting until a victim comes along.

When it does, the Tiger Beetle leaps like a tiger, grabs the prey with its powerful mandibles and eats it whole on the spot.

In addition to waiting in ambush, adult Tiger Beetles will also chase their prey.

There are very few pest insects capable of outrunning the Tiger Beetle.

These bugs have been known to run as fast as 5 miles an hour and (given their size) one of the fastest animals on land.

How To Control Tiger Beetles?

There’s no need to control them. These beetles are entirely beneficial, and usually not present in high numbers.

Your approach to Tiger Beetles should be welcoming.

Attract them by providing them hiding places (bark, logs and/or leaves) on the ground and spots of loose, sandy soil to lay their eggs and dig their burrows.

Tiger Beetles are not pests.

At every phase of their lives, they work hard at eating garden pests.

They are some of the best garden helpers to have.

They eat a wide variety of pest insects, and they occasionally eat other beneficial insects, but not in numbers which should cause you any alarm.

If you have a healthy Tiger Beetle population in your garden, they provide nourishment for other garden helpers such as birds, lizards, and toads.

All in all, having Tiger Beetles in your garden is a win-win situation.