Streptosolen jamesonii [strep-toh-SOH-len, jay-mess-OWN-ee-eye] is a monotypic genus of flowering plants belonging to the Solanaceae family along with Nicotiana alata and Calibrachoa (million bells).

Previously, the plant was placed within the Browallia genus earning it the vernacular Orange Browallia.

Its showy orange flowers have earned it new common names including: 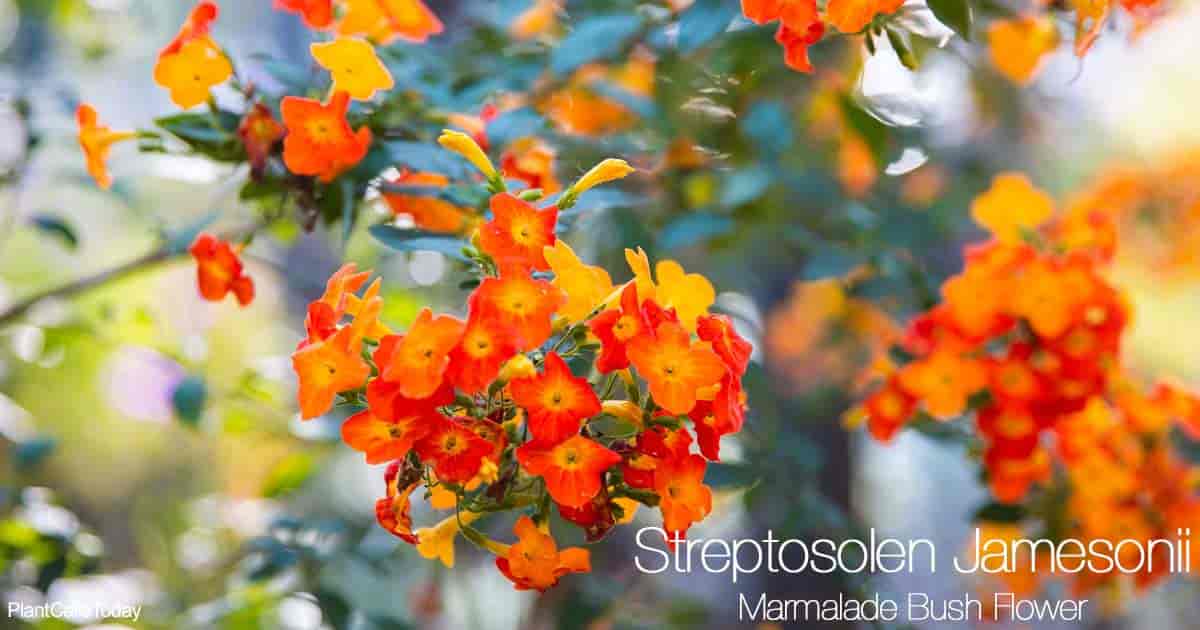 It’s native to South America and is commonly found in the woodlands of Colombia, Ecuador, Peru, and Venezuela.

The genus’s botanical name Streptosolen is a compound of to Greek words essentially meaning twisted tubes. A reference to the plant’s root system.

While hard to find, the fire bush plant is easy to grow. When all growing conditions are met, it can reach its ultimate height between 6’ – 8’ feet.

The spread is just as spectacular and grows 6’ feet across and even more, if left untouched.

The foliage consists of bright to dark green leaves with a ribbed appearance. They grow quick and lush.

Even when the plant doesn’t have any blooms, the foliage is exquisite.

The flowers of the plant are its main attraction.

They put on a brilliantly vibrant show throughout early to late spring i.e. February to July in areas where winters are mild.

However, they can appear throughout the year in some areas.

The 5-petaled flowers are yellow or light orange when they start opening but then take on darker shades of orange and red.

While they lack a strong fragrance, the blooms are known to have lots of nectar.

This is why butterflies and hummingbirds are regular visitors to the flowering plant.

The plant is hardy to USDA Hardiness Zones 9b to 11.

They are drought resistant and can handle some heat during hot summers. In winter, they need protection.

Even though some plants may take brief and light frost, they are best brought indoors for the winter.

The plants grow best in part shade but can tolerate full sun with sheltered exposure.

They also grow well indoors when placed in a sunny spot or under horticultural lamps.

The tube-like root system of the plant loves moisture in the soil.

Be careful not to water too much. At the same time, don’t let the soil dry out completely.

When the plants are in active growth, feed them with a slow-release pelleted or organic fertilizer.

This should be done at least every 2 months during the growing season.

If you’re using humus-rich soil containing fertilizer, avoid adding it to the mix when your plants are just seedlings.

The plants respond well to most well-drained but moist and fertile soils.

They are hardy plants and thrive in sandy and loamy soils with a neutral pH.

Marmalade bushes respond well to being transplanted when they are new.

Two months after the seedlings appear, gently transplant the bush into a container a few pot sizes bigger.

Be gentle when doing so as the root system is very delicate.

Water the soil before repotting the plant to avoid breaking the soil ball.

Fire bush is known to grow quite spectacular foliage.

As the plant grows older, it may need to be pruned and sheared to keep it neat.

It will also encourage growth in the way you want it to spread.

For instance, if you want the plant to line walls, tie upright growing branches to a trellis or over an arbor and trim the ones growing outward.

If you want the plants to spill over hanging baskets or window boxes, trim upright branches.

Be careful about not removing too many branches at a time.

How to Propagate Fire Bush

They are also propagated with seeds but the plants may take time to flower.

If you’re using seeds, sow them as soon as possible.

Use small pots or cups with drainage holes and use a 2:1 ratio of potting soil and perlite.

Water the soil first and then add 2 to 3 seeds on top.

They should sprout within a few weeks.

Transfer them to a bigger pot after a month.

However, one needs to be careful and keep an eye out for possible glasshouse white-fly attacks, aphids, and glasshouse red spider mites.

Similar to its cousin, Brugmansia, the marmalade bush contains a toxin.

In the U.S., the California Poison Control System has assigned the plant “code number 4”. This is in reference to the plant’s toxicity.

The plant may be a risk to health if consumed in large quantities.

Even though accounts of toxicity and poisoning from these flowers are rare and vague, it’s better to be careful if you have kids and pets around.

The striking foliage and bright flowers of the fire bush look incredible spilling from baskets and window boxes.

They are also striking when lined along garden stairs and walls.

In the coastal regions south of San Francisco, the plant is a favorite greenhouse plant as well.

It may also be planted with other flowering evergreen shrubs to give a variety of colors.

Because the plant can reach an incredible height of up to 6’ feet, it is not recommended as ground cover.

Other uses of Streptosolen jamesonii exist in Folk medicine in the Piura Region in the northern Peruvian Andes and Ecuador.