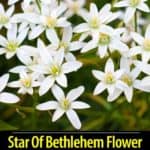 Ornithogalum [or-ni-THOG-al-um] is a genus of flowering perennials belonging to the Asparagaceae family and native to South Africa and Southern Mediterranean Europe.

The botanical name of the genus is a combination of Greek words ornithos meaning bird and gala meaning milk.

This is thought to reference the white color of the flowers.

The common name “Star of Bethlehem” is also derived from the flowers.

The six petals of the flower resemble the northern star appearing in Jesus’s birth story.

There are around 50 to 300 species, each having some rendition of this common name.

While invasive in many regions, some species are favored by gardeners for their showy flowers.

NOTE: Ornithogalum was originally placed in the family Liliaceae in 1763.

While incredibly easy to grow, the Ornithogalum genus takes some time to germinate and mature.

However, when all growing conditions are met, they can grow up to a height between 0.5’ to 1’ feet.

The typical spread is between 1’ – 2’ feet with narrow, semi-erect, and grass-like foliage.

Linear leaves are around 12” inches long and grow from basal clumps.

As the blooming season approaches, the leaves begin to droop and fade, allowing flower stems to rise.

The star-shaped showy flowers of the genus are its main attraction.

At bloom time the flower stems start rising in late spring to early summer and are approximately 6” – 8” inches in height.

Each stem bears around 10 or 20 white flowers in open and umbel-like terminal clusters. Some compare the flowers to a white camassia plant.

The blooms have a green stripe on the outside of all six petals.

The flowers open around noon and close when the sun sets or is hidden behind dark clouds.

Generally, Ornithogalum plants are hardy to USDA Hardiness Zones 4 to 9.

The plants tolerate both full sun and partial shade.

Sheltered exposure is necessary if the sun is during the hottest parts of the summer season.

The plants have average watering needs and do well with regular watering throughout the growing season, i.e., from early spring through early summer.

Once the flowering is over, and the leaves have started to yellow, withhold water and don’t resume until new growth appears.

A general-purpose, houseplant liquid fertilizer will do well for the plants.

When the plants are new and germinating, apply fertilizer every two weeks.

For mature plants, withhold fertilizing after the growing season ends.

They prefer medium moisture and well-drained soil mixtures and are suitable for acidic, neutral, and alkaline soils.

It is an easy plant to grow and succeed in most ordinary garden soil, but sandy and loamy soils are preferred.

As for transplanting, the plants don’t need to be transplanted.

The only time they need to be moved is when the plant bulbs are in the first two growth years.

The plant is not difficult to grow, but it needs careful attention when it comes to maintenance.

This is mostly due to the invasive nature of some of the Ornithogalum species.

Avoid mowing or cutting them when the bulbs are just beginning to grow.

Also, don’t cut them down before they have set seed.

Prune the dead foliage when the leaves are starting to die out and fall.

Once the blooms from the flower bulbs have faded, clip off the spent blooms to prevent self-seeding and over-spreading.

How to Propagate Star Flower Plants

The plant may be propagated with seeds.

Sow the seeds in a cold frame as soon as they are ripe during the fall or spring.

Place the seeds on the surface and cover them thinly, leaving them undisturbed for the first dormancy period.

Feed liquid fertilizer at intervals during the second year of growth.

At the end of the second growth year, separate 2 to 3 bulbs in a pot and allow them to grow for one more year, moving them to their permanent location when they’re dormant.

Divide offsets or bulbs in September or October. Plant the larger plant bulbs directly in their permanent position.

For smaller Ornithogalum bulbs, it is recommended to pot them first.

Let them establish for a year and then plant them out in late or early summer.

The plants are mostly free of serious insect and pest problems.

Bulb rot and root rot may be a problem in plants where the soil doesn’t have good drainage and gets too soggy.

Improving the soil’s drainage may improve the plant’s health.

Is This Plant Toxic?

Some plants within the genus Ornithogalum are known to have toxicity. They are known to be poisonous and harm or even kill grazing animals.

These plants’ bulbs contain alkaloids and cardenolides, which are toxic.

If any part of the plant is ingested, it may cause discomfort. The sap can irritate the skin on direct contact.

Be careful if you have pets and/or children and if you live in an area where grazing animals can access the plants.

Is This Plant Invasive?

The plant is ornamental but is invasive in some regions where growing conditions suit the shrubs’ needs.

Ornithogalum umbellatum is listed as a Class C weed in Alabama.

Some species such as:

are sold as ornamental and cut flowers.

The plant grows well and looks incredible in patio containers and pots.

This will allow you to control their growth and keep limited to the pots.

Naturalize the plant in grass, meadows, shrub borders, woodland margins, and other wild areas where they don’t become a problem.

Avoid planting the Star of Bethlehem in rock gardens and formal gardens, where the species can overtake other plants and become a problem.