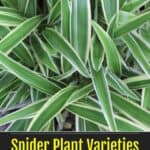 Of all the houseplants out there, few have seen the success of Chlorophytum comosum (kloh-roh-FY-tum kom-OH-sum), better known as the spider plant. By the way caring for Chlorophytum plants is easy!

Found natively throughout tropical and subtropical regions in Africa, Asia, and Australia, the Chlorophytum genus has nearly 200 known types of spider plants, even though Chlorophytum comosum and its cultivars tend to steal the limelight.

The name chlorophytum means “green plant,” which seems like a strange name for a plant.

Likewise, the origin of this genus’s common name isn’t related to how the plant and its plantlets often resemble spiders in a hanging pot.

The nickname is once again due to the history of Chlorophytum comosum.

In Europe, a plant called St. Bernard’s lily (Anthericum liliago) was used for thousands of years to treat spider bites. As a result, it was often referred to as the spider plant in many European languages.

Fast-forward to 1794 when Swedish naturalist Carl Peter Thornburg spent some time in South Africa and ran into a plant very similar to the spider plant.

Not long afterward, the two species were both moved to a new genus called Phalangium after a spider genus of the same name.

After being shuffled around to several other genera, the plant finally made its way into the Chlorophytum genus in 1862.

It soon became so popular that the entire genus (sometimes have the same spider-like appearance) became known as spider plants.

Spider or airplane plant have a lot of different uses, depending on the species.

Many are grown for medicinal purposes, such as Chlorophytum borivilianum, while many others are grown as ornamentals.

Chlorophytums may be used as a groundcover, with some having attractive floral displays while others are used almost exclusively for their foliage.

Outdoors, they can make for excellent groundcover, especially along borders.

Some species and cultivars also make great edge plants for water features, although others may run the risk of rot.

However, it’s far more common to see spider plants grown in hanging baskets or on shelves, where many trailing species cascade down or creep along surfaces, often bearing little plantlets.

How Many Spider Plant Varieties Are Available?

While there are currently about 191 confirmed species of chlorophytum out there, many have cultivars.

Chlorophytum Comosum alone has three varieties and more than 200 cultivars to its name.

Which Varieties Can I Keep In My House?

Pretty much all chlorophytums may be grown indoors, although you may wish to check to see if a particular species is toxic to children or pets.

Chlorophytum comosum is very popular due to its relatively non-toxic nature, although it may cause diarrhea or vomiting if ingested and can be a mild hallucinogen to cats.

Chlorophytum comosum cultivars fit into three categories into which the cultivars of other species may find themselves placed accidentally.

When you think of a spider plant, chances are you’re thinking of ‘Vittatum.’

Growing up to 20″ inches tall, ‘Vittatum’ is the original variegated cultivar and bears a wide, creamy stripe down the middle of each slightly curved medium green leaf.

Insignificant white flowers form near the base, cascading down in the same manner as the plant’s spiderlings.

While ‘Vittatum’ looks good sitting on a bookshelf or table, it’s most commonly grown in hanging baskets.

It’s also more drought-tolerant than a lot of other spider plants.

‘Reverse Variegatum’ is also referred to as the variegated spider plant, but it has darker green leaves with the cream appearing as the margins instead of a central stripe.

This variegated cultivar is often mistaken for a comosum, which can lead to a lot of frustration.

Despite having foliage very similar to a variegated spider plant, this cultivar won’t produce spiderlings and has tiny, insignificant blooms near the base of the plant.

This plant is often referred to as variegated spider plant or dwarf spider plant by nurseries, so it’s important to verify the botanical name if you wish to get (or avoid getting) this cultivar.

But Bichetti grass has a wonderful use as a groundcover for the very reasons you might wish to avoid getting it instead of a comosum: the lack of spiderlings.

While still attractive as a hanging plant, the leaves of this cultivar are slightly thinner than that of comosum and bear the same cream stripe either along the center or margins but a less noticeable midvein.

Bought intentionally, this is a wonderful spider plant with many uses, although the frequent mislabelling can lead to disappointment if you think you’re getting a variegated comosum cultivar.

If you’re lucky enough to find this curly cultivar, it’s well worth the price tag.Some call it the – curly spider plant.

The plant closely resembles a variegated spider plant, with curly leaves that give it a more dense appearance.

In addition to the green and white stripe variegated plant, the floral stems are yellow, providing even more appeal.

Due to its more compact design, ‘Bonnie’ is perfect for shelves, desks, bathroom, and other small spaces while still looking good as a hanging plant.

When you want a plant that resembles a comosum but without the spiderlings, Chlorophytum capense is a great choice.

The leaves on this species tend to be a bit more upright than many other spider plants, and the flowers also grow upright.

The solid green leaves grow in a clump, making it an excellent choice for borders and groundcover.

Also referred to as ‘Golden Glow,’ this cultivar is to ‘Vittatum’ what ‘Zebra Grass’ is to ‘Reverse Variegatum.’

It grows to an almost tiny 1′ foot tall compared to some other spider plants but has a lot of character.

Its dark green leaves have a central stripe of champagne to ochre tones which fade as the plant gets older until the leaves become solid green.

The spiderlings will also bear these fading stripes, but the variegation returns when removed from the mother plant until they reach maturity.

As with other popular spider plants, this cultivar is perfect both in hanging baskets and border plants.

It sometimes also goes by the cultivar names of ‘Reverse’ or ‘Variegatum,’ leading to a lot of confusion.

Despite being a newer cultivar than ‘Vittatum,’ it’s surpassed its kin in many areas as the premier variegated spider plant.

However, ‘Reverse Variegatum’ is not as drought-tolerant and will need slightly more attention as a result.

Often referred to as simply “zebra spider plant,” this cultivar is similar to ‘Reverse Variegated.’ But with a few key differences.

It grows up to 20″ inches tall and nearly as wide.

The leaves are dark green with yellow that turn to white edges as the leaves mature.

Like comosum, this cultivar produces spiderlings that will cascade down when the plant is kept in a hanging basket.

While very similar to the ‘Reverse Variegatum,’ it’s a lot harder to find for purchase.