The soldier beetle is very common in the garden and sometimes incidentally invade your home.

These abundant beetles are sometimes called leather wings because of their soft clothlike wing covers.

They earned the common name ‘soldier beetle’ because of the color pattern reminiscent of the early British soldiers red coats.

There are many different types of soldier beetles (family Cantharidae), some are very brightly colored and often confused with blister beetles. 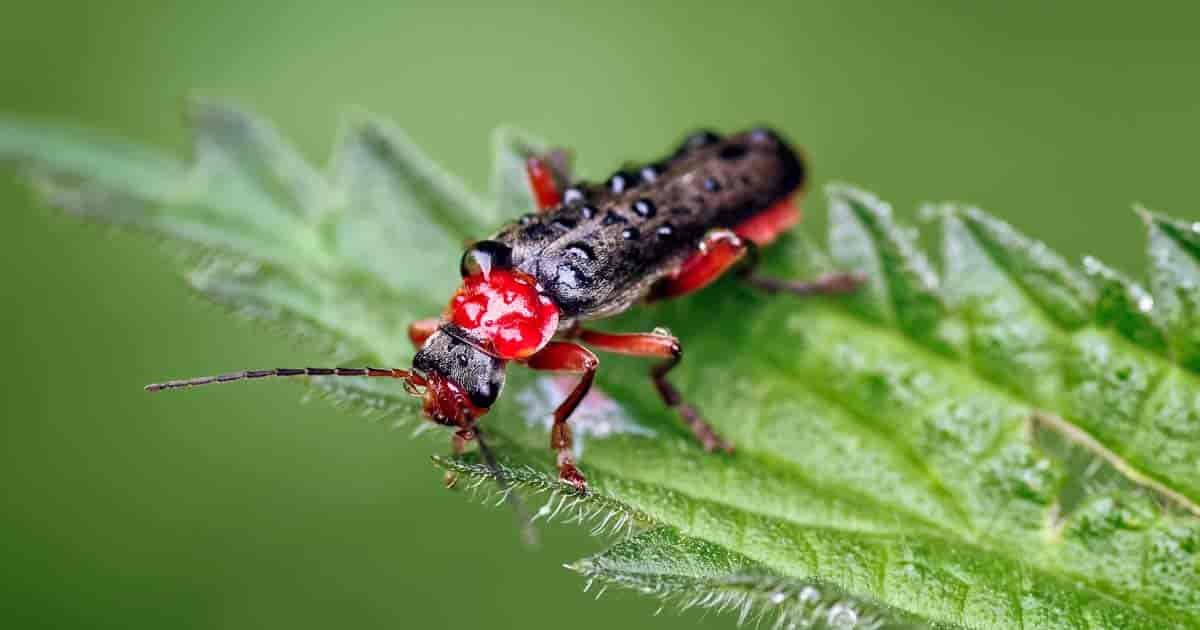 These beetles look quite a bit like lightning bugs and are actually related to them, but they do not produce light.

Typical soldier beetles have black legs and a black head. Behind the head you’ll usually find a small black spot.

Additionally, each wing cover has a small black spot. When the beetle is at rest, you can see parts of its abdomen.

These good beetles are soft-bodied, about 1/2″ inch long and very slim.

Common colors vary, you may see them in shades ranging from a very pale yellow to a very bright red.

Soldier beetles protect themselves from other predatory insects by secreting chemical compounds that make them taste bad.

It is believed that their yellow color is intended as a warning to other bugs to let them know that soldier beetles are not tasty prey.

Soldier beetles are not true bugs. They do not have piercing, sucking mouthparts.

Instead, they have chewing mouthparts which they use to eat insect pests and their eggs, pollen and nectar.

For this reason, soldier beetles are considered to be good (beneficial) predator insects.

The larvae of the soldier beetle are also important predators and beneficial garden insects. They are long, slim and worm-like.

Their bodies appear to be rough and scaly, and they have been described as looking like little alligators.

Soldier beetle larvae are dark-colored. You may see them in shades ranging from dark gray to dark brown.

They overwinter beneath leaf litter and damp soil and underneath loose bark.

In the autumn, you may spot larvae of soldier beetles in your home.

This is because they’re looking for warm places to stay in the winter.

When this happens, sweep them up and take them outdoors to a place where they can burrow in and stay safe during the wintertime.

In the springtime, you may find soldier beetle larvae moving around in piles of debris and loose earth in your garden.

Leave them where they are because they do a good job eating the egg and larvae of detrimental insects.

Early in the summer, the larvae pupate.

In July, they emerge from their pupal state as adults.

The adult beetles are very active during the months of August and September.

During this time, you may see them in great numbers moving from flower to flower, mating and laying eggs.

Before winter begins, the eggs will hatch and the larvae will begin looking for places to overwinter.

Do Soldier Beetles Cause Any Damage?

Both larvae and the adults are entirely beneficial insects.

They prey on other insects and eat insect eggs.

The beetles also feed on nectar and pollen from flowers.

In the process, they perform a great deal of valuable pollination.

Soldier beetles especially like plants that have yellow flowers. Attract them to your vegetables by planting some of these favorites:

Soldier beetles are also attracted to the yellow and orange flowers of squash and pumpkin plants.

These beetles do not hurt people or animals. They have no way of biting, and they are not aggressive.

Even if you see them in very large numbers, you are best off simply leaving them alone.

Soldier beetles can fly, and you may mistake them for bees or wasps as they move about quickly from one flower to another.

Take some time to examine the beetles so that you can more readily differentiate them from wasps.

Late in the summer, you will probably see lots of soldier beetles mating on your flowers, and find this disconcerting.

Take solace in the knowledge that these beetles will not hurt anything.

They’ll help you keep your garden free of pests, and they will help pollinate your flowers and vegetables.

If the beetles or the larvae come into your house, just sweep them up and take them to a safe place outside.

If you want to prevent having them come into your house, seal up any possible entries such as gaps around your windows or any little holes around the perimeter of your home that might allow them access.