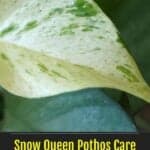 The Epipremnum aureum (ep-ih-PREM-num AW-re-um), is the most common houseplant that isn’t who it claims to be.

It is best known as the pothos plant, yet it isn’t a pothos at all. It’s a former member of the genus and has several aliases:

A perennial member of the Araceae family,  this imposter pothos has several cultivars which have solidified its fame. It originally hails from Mo’orea in French Polynesia.

One of these, Epipremnum aureum ‘Snow Queen’ is one of the more famous and shares many of its parent’s nicknames, such as:

One should note that Epipremnum aureum and its cultivars are quite aggressive and have become invasive in many countries, as well as in the state of Florida. Hence, maintenance is essential when planting outdoors.

It’s not unusual for “Snow Queen” to reach 10′ feet in length in the right conditions.

The large heart-shaped leaves of this cultivar are around 70% to 75% percent cream-colored variegation, with the remainder being light green.

When the plant reaches maturity, the leaves elongate and become more pinnate.

One very curious aspect of Epipremnum aureum “Snow Queen” is that it’s the only member of the arum family that doesn’t flower naturally. Yet it is labeled an angiosperm (or flowering plant).

A genetic flaw prevents the production of certain gibberellins (AKA GAs, which are hormones that regulate a plant’s growth and development) required for producing flowers.

It is fascinating because scientists can get Epipremnum aureum to flower by spraying it with the missing hormone.

Unfortunately, one cannot easily reproduce this at home, so only a handful of people have ever seen this false pothos bloom.

Avoid direct midday exposure, as this can scorch the plant’s leaves.

Morning or evening exposure of 5 to 6 hours of direct sunlight with shade in the afternoon is an excellent choice for outdoor growth.

The amount of humidity your snow queen needs depends upon how much you want her to thrive.

She can handle lower humidity but will grow like crazy in higher humidity.

You can augment the humidity by keeping the plant in your kitchen or supplementing it with a pebble tray or humidifier.

The snow queen makes for a great ground covering in USDA hardiness zones 10 to 11. But its invasive nature and popularity as a container plant make it far more likely to be grown indoors even in these zones.

As with most plants, the soak-and-dry method is an excellent watering method for your snow queen.

Test the soil with your finger and only water when it’s dry 2″ inches deep.

Use distilled water or natural rainwater, pouring slowly and evenly until it seeps through the drainage holes.

Never overwater this vine if possible, as it’s highly susceptible to root rot.

Whether you choose to feed your snow queen is a matter of personal choice, as it will do fine without it.

If you wish to promote more growth, give your snow queen pothos a balanced liquid houseplant fertilizer or fish fertilizer once a month during the growing season. Follow the instructions on the packaging.

As your snow queen pothos is an epiphyte (meaning it climbs other plants without feeding on them), it pulls most of its nutrients out of the air around it.

That said, a cactus mix is perfect, although any good houseplant potting mix with a soil pH of 6.1 to 6.5 will work as well.

Ensure the soil is well-draining and adds up to 30% percent perlite if needed. Make sure it remains loose and won’t retain too much water.

Royalty has a habit of becoming set in its ways, and ‘Snow Queen’ is no exception.

Unlike many other plants, regular repotting will result in a long recovery time and isn’t necessary.

Instead, repot only when you see roots beginning to poke from the drainage holes. Use a pot one size larger and fresh soil when you do.

If your snow queen is in a container, it’s far more manageable. Once planted in the garden it can get out of control and need more frequent pruning.

In both cases, trim off any leggy or excess growth with sharp, sterile shears as needed and remove any damaged or diseased leaves.

Stem cuttings are by far the most popular method for propagating a pothos snow queen.

However, if you feel a little adventurous and have a steady hand, you can also use the air layering method.

While snow queen is more susceptible to attracting pests and diseases, it’s also resilient when dealing with them.

Mealybugs, spider mites, and thrips are the three most common pests to pester your snow queen.

Meanwhile, the most common diseases are bacterial wilt, fungal infections, and root rot. The latter can be deadly if not treated early on.

As with all arums, snow queen contains calcium oxalate crystals, considered toxic to both humans and pets if consumed.

While this vining plant can be used instead of ivy in southern regions, its true claim to fame is in containers or a hanging basket.

Give it a support pole or trellis and watch it climb, or allow it to scale a bookshelf for some added attraction.

Even better, plant one in a hanging container and watch it compete with your spider plant to become the main topic of conversation.