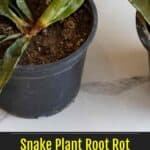 Snake plants have been quite popular among homeowners for decades.

They are easy to care for, with attractive green foliage that can bring color to any room.

The first is the genetic sequencing that led to these plants being officially renamed from Sansevieria spp. to Dracaena spp. in 2017 despite being very different in appearance and care from dracaenas.

This has led to a lot of confusion when looking for snake plants. The general population disagrees with the rename and uses the previous species name but botanical sites now almost exclusively use the new name.

The second is a deadly infection called root rot. Sadly, it can easily be caused by snake plant owners trying to care for their sansevierias as if they were dracaenas.

Root rot can be a deadly problem but can almost always be cured if caught early enough.

Getting rid of root rot is a 3-step process: identifying the cause, treating the infection, and taking preventative measures to prevent future outbreaks.

Step 1: Identifying The Symptoms And Causes Of Root Rot

Root rort can be bacterial or fungal, although fungal root rot is far more common.

The warning signs of infection begin with some of the outer leaves turning yellow.

As the infection spreads, you’ll begin to notice a foul odor coming from the soil and may notice lesions or dark spots forming at the base of the plant.

Excavation will reveal brown or black roots (the black ones are already dead), and how extensive this damage is will determine if the plant can be saved.

Thankfully, the cause can almost always be traced back to care issues.

Once you know (or are pretty sure) which of these potential causes is at fault, you can begin the process of recovery and prevention.

At one time, discovering root rot meant discarding a plant immediately. However, the condition is treatable as long as there are still some healthy roots.

Thus, the first step is to remove the plant from its container and gently rinse off the soil.

Avoid using too much water pressure and be gentle, as even the healthy roots can be fragile.

Now inspect the roots, identify any brown or black ones, and estimate how extensive the infection is.

If the plant can be salvaged, grab a sharp knife or pair o shears and sterilize them by dipping the blades in either isopropyl or rubbing alcohol (the higher the percentage, the better).

You can also use a solution of 1 part bleach in 10 parts water, although this is more effective later on for the plant itself.

Cutaway each infected root, be careful not to damage healthy roots and sterilize the tool again after each cut.

Cutaway any leaves that are heavily diseased (i.e. Mushy or wilted).

For more heavily damaged plants, you’ll also want to remove any yellowed leaves and older ones (those outside the plant).

If the plant lost 50 to 75% percent of its roots, you’d need to prune away as much as ⅓ of the foliage.

Remember to sterilize after each cut and put all of your scraps in a sealable plastic bag so they won’t cross-contaminate any other nearby plants.

Finally, if your snake plant is flowering, you’ll want to cut the flower stalk.

This helps the plant conserve resources and will reduce the amount of stress caused by losing so much foliage at once.

There are two ways to do this: dipping in fungicide or dipping in a bleach solution.

Then, allow the plant a day or two to air dry (you won’t have to do this with a fungicide dip).

The final step is essential, as your plant will be heavily stressed and highly susceptible to disease and pests for a while.

Use a new, sterile pot or the old pot if you soak it in a solution of 1 part bleach to 9 parts water for half an hour, then thoroughly dry) and fresh potting mix.

Be sure to amend the soil with aggregate to ensure it drains well and only uses a container with suitable drainage holes.

Pro Tip: Place a ½ to 1″ inch layer of gravel or aquarium stones in the bottom of the pot before adding your soil. This gives an extra buffer zone in case of overwatering.

As mentioned in the first step, root rot is almost always the result of a care issue.

Always use the soak-and-dry method when watering, and use a fresh potting medium every time you repot the plant.

Only buy potting soil from reputable companies (Miracle-Gro is perhaps the best choice for those with a low budget and an excellent reputation). Companies selling cheap mixes will often skip proper sterilization steps to keep their costs down.

Also, always keep your tools sterilized before, during, and after any pruning. Also, wash your hands between plants to keep the risk of cross-contamination minimal.