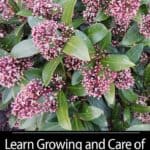 Skimmia japonica ‘Rubella'[SKIM-ee-uh juh-PON-ih-kuh] is a compact flowering evergreen shrub which produces red fruits and belongs to the Rutaceae family.

This shrubby species gets its name from its place of origination i.e., Japan.

The plant is also natively found in China and Southeast Asia.

The dark-green foliage of this plant looks even prettier when white flowers or yellowish flowers grow during its bloom time.

The shrubs are widely cultivated as ornamental plants and used in parks and woodland gardens alongside other flowering plants.

You may also hear this plant by its common name Japanese skimmia.

It’s a variable species with simple leaves, dense branches, and grows up to 22′ feet tall.

When cultivated for ornamental purposes, the plant typically grows up to 5′ feet.

This evergreen plant has alternate medium green to dark green leaves crowded at the end of a stem.

The leaves have a slight aroma, leathery texture and are obovate to elliptical.

Skimmia has a slow growth rate and has a spread anywhere between 4′ – 5′ feet in diameter.

Female plants may have an even wider spread.

The flowers appear on the tips of the branches in creamy white, yellow or slightly tinged with pink.

It’s further made beautiful with the appearance of shiny bright red berries.

Berries ripen in the fall and persist through the cold winter months.

The flowers bloom in rounded panicles 2″ – 3″ inches long at the branch tips in mid-spring.

When set against the background of snow, these appear very festive with the red berries stark against the green foliage.

The berries are poisonous.

If ingested in large quantities, the berries can cause stomach issues and other severe problems.

In very rare cases, the berries have led to cardiac arrest and other severe implications.

So make sure female plants are not in reach of children.

Skimmia is relatively easy to grow in moderate temperatures.

Performs well in both partial shade to full shade locations.

In moderate climates, the plant can tolerate full sun.

However, you need to ensure the soil is kept damp, but the foliage can still be scorched.

It does well in moist soil, so make sure to water it regularly while avoiding drowning the roots in too much water.

Overwatering can cause root rot and be harmful to the plant’s health.

Feeding depends on the health of the foliage.

If the leaves on the plant are green, lush, and healthy, delay fertilization.

However, if you notice the leaves fading in color and stunted growth, feeding is required.

Regardless, the best time to feed the plant is during late winter or early spring.

Japanese skimmia prefers slightly acidic soil with a pH of 5.6 to 6.0.

When transplanting the shrub to its permanent location choose somewhere not exposed to the full sun.

Skimmia have male and female plants. If you want the female shrub to produce berries, plant a male Skimmia nearby.

One of the beautiful benefits of Skimmia is it has a very neat growing habit.

It grows in a dome shape and rarely requires pruning.

Prune and trim the shrub during the winter months when the plant is dormant.

During the holidays bring a few sprigs of the plant indoors as decorations.

How to Propagate Japanese skimmia

However, it is not uncommon for it to take longer to root.

Skimmia is mostly disease and pest-free.

However, keep an eye out for spider mites, horse chestnut scale, and wine weevil.

As for diseases, it may be affected by Phytophthora.

Mostly, Skimmia japonica is used as ornamental plants and planted in flower borders and beds.

Since they are low maintenance, they’re also commonly used in public parks and courtyards.

In China and Japan, it’s used by hobbyists for bonsai.