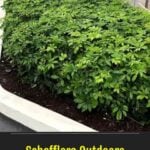 Schefflera (shef-LER-uh) might not seem like a large genus at first, but when you consider its 600 to 900 species make up half of the Araliaceae family, those numbers become a lot more impressive.

Depending on the species you have, these plants may be from Africa, Asia, Australia, or any of the southwestern Pacific Islands.

While these plants are best known as simply “Schefflera”, other common names include umbrella tree (or plant), starleaf, and octopus tree, with some Australian species brewing known as Australian ivy palm.

Schefflera plants have had quite the identity crisis among botanists, having been known by a number of different genus names over the years, including:

But the good news is that these plants tend to have very similar care requirements, regardless of what name you use.

And even better news is that you can enjoy these wonderful trees and shrubs outdoors seasonally, even if you’re in a cooler climate.

Schefflera can vary in size and shape depending upon the species or cultivar, but they will usually range from 13′ to 33’ feet tall domestically, with a wild growth sometimes exceeding 40’ feet.

Potted plants tend to be a bit smaller, with dwarf umbrella trees often only reaching 6′ to 8’ feet tall in a pot.

The number of stems can also affect Schefflera’s growth habit.

For example, a single stem will result in a tree-like appearance while multiple stems will begin close together and diverge as they get taller, giving the plant a shrub-like appearance.

Some species may even take on a vining habit, much like lianas.

The leaves tend to form in groups, sometimes tipping the stem in a splayed group of five that resembles fingers, and other times in an almost star pattern.

Depending on the species or cultivar, these may be solid or variegated, and new growth almost always appears at the tip of the stem, although it’s not unusual to see a bit of new foliage appearing lower on a stem’s numerous growth nodes.

Potted Schefflera almost never blooms, unlike those grown in the ground.

If you’re lucky enough to get blooms, they’ll appear as groups of showy flower spikes in pink, red,  or white; which sometimes resemble octopus tentacles.

You’ll want to give our Schefflera a spot with bright, indirect sunlight.

When choosing a summer spot to bring it outside, you may shelter it behind a taller tree for some dappled sunlight.

Alternatively, you can position it in a spot where it will get full sun in the morning or evening but have light to partial shade during midday.

Never expose the plant to full sun in the afternoon, as the rays are more intense and may scorch the leaves.

As these plants may only grow outdoors in USDA hardiness zones 10 to 12, you’ll need to bring it inside when the temperature is due to drop below 50° degrees Fahrenheit.

Never leave your Schefflera outdoors if the temperature drops to 45° degrees Fahrenheit or below, as this can cause permanent damage to the plant.

Note that you may also need to mist your Schefflera occasionally while it’s outdoors, as it prefers higher humidity levels.

The soak-and-dry method is perfect for these tropical wonders.

This means that you will want to stick your finger into the pot occasionally and only water when it feels dry 2” inches down.

If you are keeping your Schefflera in a sheltered spot such as on a porch, it will need more frequent watering than one left on a patio or other area that lets it enjoy the rain.

Use room temperature distilled water or rainwater and pour slowly and evenly around the circumference of the container until you see moisture beginning to seep from the drainage holes.

While your plant is outside, you may wish to supplement its feeding with some fresh organic compost.

In terms of fertilizer, a balanced liquid houseplant fertilizer works great when given once per month during the growing season.

A good rule of thumb for your Schefflera is to feed it only during months the pot is outside and hold back when it’s inside.

As your umbrella plant is in a container, garden soil won’t be sufficient, even though the plant is outside.

Instead, choose a quality tropical potting mix and amend with a bit of sphagnum moss and perlite.

A slightly acidic pH of 6.0 to 6.5 is ideal, although you may have to occasionally test the soil if you use tap water due to the chemicals and mineral content often raising the pH of otherwise good soil.

Repotting Schefflera is a relatively simple task and should be done when the plant becomes rootbound (you will start to see roots poking out of the drainage holes) or every 3 years.

Always give it fresh soil when potting and try to time it for late winter, approximately 24 hours after watering for the best results.

Schefflera are not the kind of plant you can leave alone for a long period of time without it becoming leggy.

Umbrella plants can handle aggressive pruning as necessary, but can also enjoy a little light maintenance here and there.

There’s a bit of a trick to pruning, as you will need to plan ahead and prune differently based on whether it has one or several stems to get the look you want.

However, these plants are very forgiving if you make a mistake and can usually recover when lobbed as short as 6” inches from the soil.

How To Propagate Umbrella Plant

Most Schefflera enthusiasts prefer to use stem cuttings in either soil or water.

However, these plants may also be propagated using leaf cuttings, air layering, and via seeds.

Scheffleras are fairly resistant to pests and disease but can be more likely to encounter both while their container is outdoors.

Be on the lookout for aphids, mealybugs, scale, and spider mites. Go natural with pest control by applying Neem oil or insecticidal soap.

They are also more prone to root rot if they’re exposed to too much rain or watering.

All species and cultivars of Schefflera are toxic to some degree when ingested by humans or pets, with some being more dangerous than others.

The toxicity is caused by calcium oxalate crystals which may have mild to severe effects when consumed in sufficient quantities. Wear gloves when handling plants, as the sap can cause skin irritation.

There has been a lot of research regarding the medicinal uses for various Schefflera species.

When grown as a container plant, these wonderful plants can make a striking summer accent to your porch or patio, as well as being perfect for entryways.

During the winter months, they’ll continue to impress if kept near a sunny window.