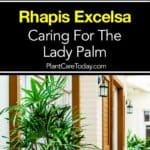 Rhapis excelsa, the Lady Palm, is grown in the garden and used indoors in a house or condo and offices around the world.

Rhapis adapts to a wide range of climates, soils, and environments, making the “Lady Palm” popular for many applications.

Rhapis excelsa is the most well-known and widely cultivated species, easily adapting to most interiors, and used in both tropical and subtropical landscapes throughout the world. Another popular species is Rhapis humilis.

One distinction of Rhapis Excelsa is that it has a multitude of named varieties in green and variegated forms.

Along with the “slender lady palm” the Rhapis also gets called by many other different common names like –  bamboo palm much most know as the Chamaedorea reed palm, fan palm, finger palm, parlor palm. I’m not much on common names but I’ll stick with the “lady palm.”

Many of these named varieties would be considered collector’s items with quite a few of the varieties being selected dwarf types.

The “Lady Palm tree” believed to originate from southern China can grow to a height of more than 14′ foot tall with clumps reaching enormous width, often having a diameter as wide as their height.

Sturdy canes or stems of the lady palm tree find themselves covered with a fibrous sheath or coarse, dark brown fiber. Excelsa is fairly cold hardy and can tolerate tropical and subtropical temperatures from 20° to 100° degrees Fahrenheit and handles both humid and dry climates.

Related: What Are The Best Plants for Cold Rooms?

A prolific producer of rhizome offshoots adds fullness and provides an easy method to increase numbers by division. In addition, seed is occasionally available.

Growth rates of Rhapis excelsa vary with culture and environment. In commercial production, the Lady Palm grows 8″ – 12″ inches in height per year. When grown indoors as houseplants, the growth rate decreases considerably.

Find a Lady palm plant that fits an area indoors and you won’t have to worry about the Rhapis palm growing too large for the space and it can work as a natural air cleaner.

They do have a growing season, but most growers would classify Rhapis excelsa as a slow grower.

A typical 6 – 8″inch  potted plant has been growing in the nursery for minimum of 2 years.

It is not unusual for the larger sizes to grow in the nursery for 4 – 7 years. This is one reason you find Rhapis excelsa being more expensive than other ornamental plants and palm trees. Believe me, they are worth the expense.

You will find two styles of “Lady Palms” in your nurseries and garden centers. One I would call a “butterball”.

The other style is a more upright and open plant. These plants have been dug from the field, are thinner in appearance but have more height.

You usually find these in pot sizes from 14″ up to 28″ inches in heights ranging from 5′ – 14′ feet tall. They are more of a specimen plant with each one having its own unique look.

Rhapis are some of the easiest palms to grow and care for, but each species has its own particular environment, culture requirements and care needs.

This makes lady palm Rhapis excelsa very versatile. Both 6″ and 8″ pots can be used as tabletop and accent plants, while 10″ and up are free-standing specimens. Wherever you may live, Rhapis excelsa is one plant that will thrive in your house or landscape.

Lady palms grows slowly, particularly as potted plants. If you start with a young, small one, it may take years before it attains any size. You will enjoy the pleasure of watching it grow into a showy palm, and your initial investment will be small.

If you desire a larger Rhapis for an immediate decorative effect, age, size and species will determine its price. The older the palm, the more time its grower will have invested in it.

Related: Why we DO NOT recommend the Majesty Palm as an indoor plant.

As with most indoor plants getting the right amount of light is a key factor in your plants health. Indoors, Rhapis excelsa palm grows best in bright, indirect light near a window or skylight but is very adaptable to low light areas.

We seem to see this type of lighting description all the time.

We measure light in footcandles.

If you begin to look at how bright certain levels of footcandles are, you will begin to understand the environment and light levels that your indoor plants require.

A Footcandle is an instantaneous measurement of light.

For example, in the evening, inside your home, with a TV and a table lamp on you might have 25 footcandles.

The light in an office or study where it is to easy to read a book is usually about 125 footcandles. Sunlight entering a south window often has levels of 500 – 800 footcandles.

A typical shadehouse where indoor plants are grown has about 2000 footcandles. Outside, on a bright sunny summer day when the sun is directly overhead is around 10,000 footcandles.

You see, you will almost never have as much light inside your house or office as in the nursery where the plants were grown.

Light is also an issue in big cities where buildings block out light. Let me state again the light levels for Rhapis indoors in a different way. Give them partial shade but as much light as you can without being in direct sunlight.

Although it is one of the most low light-tolerant of all palms, and it is ideal for a poorly lit hallway or stairwell where it will grow slowly but steadily and develop rich, dark green leaves. Give them as much as you can without being in full sun.

Whether sun or shade-loving, turn your indoor palm a ¼ turn from time to time so each side receives the stronger light. This helps it to be symmetrical and straight in stature.

The Rhapis Excelsa – Lady Palm Tree Won Me An Award!

The lady palm plant (broadleaf) has been one of my favorite palms for use indoors for many many years. In fact, the image below is of me, (I know I have a face for radio) in 1990 at the TPIE (Tropical Plant Industry Exhibition) where I won the award for the “Most Unusual Plant Specimen” with my large 12′ feet tall, 90 gallon Rhapis excelsa.

I will admit… it was a show stopper. But the Rhapis excelsa is just that kind of plant. The lady palm Rhapis excelsa as an indoor palm I highly recommend for your home. There are several varieties of Rhapis grown with Rhapis excelsa being the most popular.

In the video below Kevin from Kraft Gardens talks about the differences between a Florida grown Rhapis excelsa and a Hawaiian grown Rhapis palm. Notice the pot size and how big the plant from Hawaii is. Couple that with an attractive decorative container… and you have a winner!

New fronds come out from the center of the trunk. Trim off lower leaves as they age and become discolored.

If new growth is dead, the whole trunk needs to be cut out, because it has rotted, and the leaves will all eventually become dry and brown.

It is a common characteristic of Rhapis to have a brown tip or edge on the leaves.

Brown leaf damage is usually associated with extreme heat, allowing the plant to dry out, or not thoroughly watering the entire root system. Any damaged brown leaf tips can have the tips trimmed.

Remember, Rhapis grow slow so don’t remove the whole leaf. Black tips are not common and is usually associated with some type of excesses, such as fertilizer or over-watering.

Rhapis excelsa should be thoroughly watered by soaking or drenching the entire root ball. They like their soil to stay moist. Drying the soil severely can cause the foliage to turn gray, and tips to burn.

If the soil mix becomes too moist, the soil can encourage root rot and damage will eventually show up in the foliage with browning tips, or spotting on the new growth.

In container grown Rhapis, the roots will be predominately at the bottom of the container rather then throughout. Keep this in mind when checking your soil moisture. The top may be dry but the bottom still wet.

Rhapis Grow In Almost Any Soil

Rhapis excelsa will grow in almost any well-drained potting soil, but prefer a soil mixture similar to a mix used for African violet care.

Soil density should be firm and allow water to slowly filter through. Rhapis prefer to be slightly root-bound so repotting every couple years is normal. All roots and the base of canes should be covered to retain moisture.

As a guideline, apply only 1/2 the recommended rate required by other plants in your home. Leaf color is one of your best guides:

These deficiencies can be hard to determine without laboratory tests.

You will usually find these problems on old plants that are growing in landscapes.

Rhapis excelsa as are other palms can be sensitive to excess boron, fluoride, and chlorine in water supplies, which will cause fast spreading black tip burn. Use the purest water available until the problem is corrected.

Plant scale bugs on plants are the enemy of all Rhapis; Plant scale can hide in the fibrous sheath leaf bases. Mealybug and spider mites can also be an issue. Try neem oil for controlling mealybug and plant scale.

Contact sprays such as malathion are seldom effective. A systemic insecticide which is absorbed into the plant system provides the best protection or control.

Since spraying Rhapis in hot summer weather can cause leaf burn, use a systemic insecticide labeled for soil application or spray only during early morning hours.

Consult your local nursery or garden center for available options.

Rhapis are very resistant to pathogens; however, Fusarium oxysporum, Pythium, Rhizoctonia, and Penicillium (pink rot) can periodically infect Rhapis. Use a “broad spectrum” root fungicide labeled as a soil drench to provide prevention or control.

Rhapis excelsa is one of my top plants and palms for use indoors and in the landscape.