The tropical forests provide the ideal habitat for the fern growth.

Just like all other member species of its genus, the plant is epiphytic. 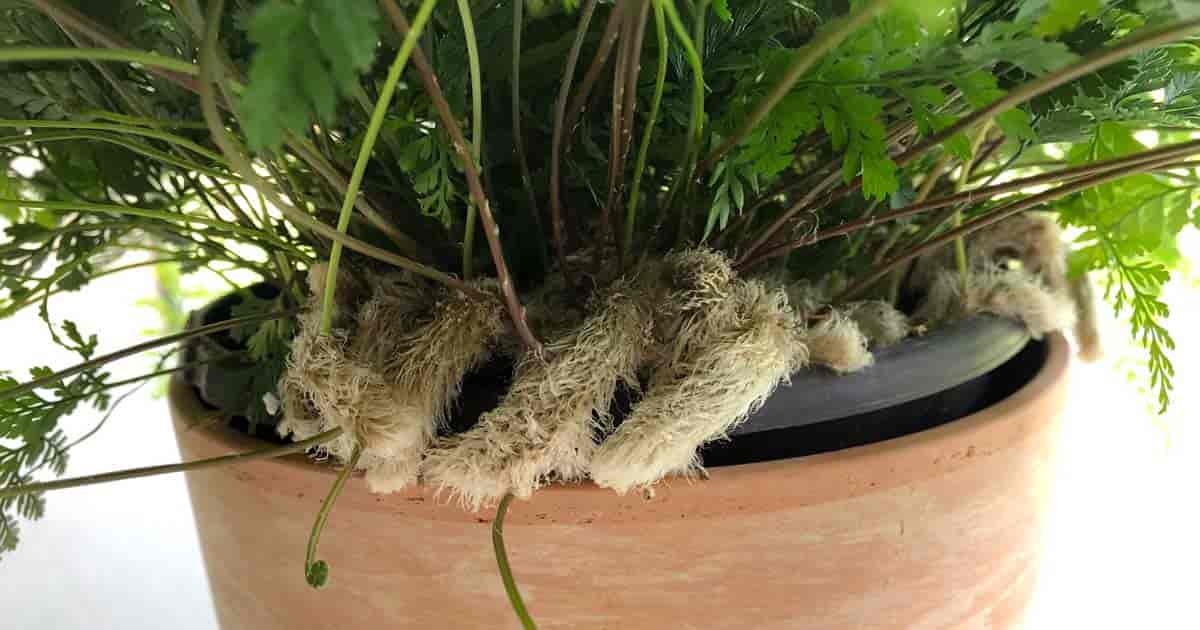 This means it grows on the surface of the soil of other plants and sometimes within the crevices of rocks and derives its moisture and nutrients from the air, water, and other debris accumulating around it.

However, it is widely grown as a houseplant.

The plant gets its common name from the yellowish-brown furry rhizomes (fleshy roots) resembling rabbit’s feet but is sometimes called Squirrel’s Foot fern.

However, the fuzzy rhizomes growing above the soil surface are its most distinctive feature of this species.

When planted in a pot, the rhizomes of Davallia fejeensis creep over the pot and crawl over the moist soil to absorb moisture and nutrients.

Since the rhizomes hang alongside the pot and can grow up to 2’ feet, experts suggest to plant it in hanging baskets.

Since davallia fejeensis is a fern, it does not produce any flowers.

Hang the plant basket near an east-facing window receiving indirect light, during spring and summer whereas a north-facing window is an ideal place during the winter season, in the northern hemisphere.

When the temperature drops lower than the ideal range, check the soil before watering; it should be dry to touch.

It can grow outdoors in warm climates USDA hardiness zones 10 to 11.

Although davallia fejeensis appears to be more resilient than other ferns, it requires the same level of moisture in the soil as most ferns.

Since the root system of this plant is small, they cannot penetrate deep inside the soil to absorb water and nutrients.

Therefore, keep the soil moist all the time, so the plant can fulfill its water needs from the topsoil.

Rabbit’s foot fern plants need to be regularly watered to prevent the soil from completely drying out, during spring and summer in particular.

However, make sure the soil is not soaked in water.

Daily misting helps keep the surface rhizomes growing on top of the soil from drying out or use a humidifier when the air is dry.

Feed the plant with a diluted liquid plant fertilizer after every 2 to 3 weeks from the start of spring season till the end of fall.

Reduce plant food to once a month in other seasons.

New plants should not be fertilized for about four to six months or until it starts to grow actively.

When fertilizing, it is suggested to use half the amount recommended on the bottle as too much fertilizer can cause scorching of the leaves.

As a garden plant, hare’s foot fern grows best in a well-drained peat-based potting soil with a neutral pH.

The plant may need to be repotted when the creeping rhizomes and roots get overcrowded and need more space to grow.

Because of its small root system always plant them in a shallow pot with a moist potting mix.

Spring is the ideal time for repotting.

You have to be careful about watering to maintain the right level of moisture in the soil.

To ensure proper new growth, the plant may need to be repotted once the roots and rhizomes grow and overcrowd the pot.

How to Propagate Davallia Fejeensis

Make sure to keep the roots and at least one stem with a frond attached to the rhizome divisions.

Less Growth and Pale Fronds – These issues are most likely to appear due to poorly fertilized soil.

Pale fronds are the result of too much or too little sun exposure.

Browning of Tips and Fronds Yellowing –The rabbit’s foot fern exhibits these problems either due to very high temperature or extremely dry air.

Limp Fronds –While this is most likely to be caused by overwatering, sometimes very cold temperatures lead to limp fronds, so check for both.

In addition to these problems, the foliage of the fern species can attract fungus gnats, mites, and thrips, so inspect it regularly for these pests.

Details on: How to Get Rid of Gnats in Plants.

Do not use pesticides, even the ones meant for houseplants, on this fern species as they are not considered safe for it.

Use a cotton swab dipped in alcohol or a wet towel to brush off the pests.

While rabbit’s foot fern is a highly prized ornamental fern grown in gardens, patios, pergolas, and terraces, its rhizomes are used for medicinal purposes in its native origin.

They are considered useful in treating a variety of health conditions, such as high blood pressure, kidney pain, blood disorders, stomach pain, diarrhea, arthritis, and even some types of cancer.

The rhizome buds are used by the Watoto people in Amazonia to treat cough.