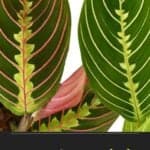 The Maranta, or Prayer Plant is a flowering member of the Marantaceae or arrowroot family of plants. Marantas hail from the tropical regions of the New World, as well as Asia and Africa.

In a tropical or semi-tropical setting, the Maranta genus is low-growing, rhizomatous perennial evergreen plant can be planted in the landscape as:

There are approximately 550 species of Prayer Plants. In this article, we share and describe 8 popular favorites. Read on to learn more.

This compact plant has a height and spread of approximately eleven inches.

The leaves of this plant are silvery blue with purple markings at the spine and pale green edges.

‘Kerchoveana’ is also known as:

This compact plant originated in the tropical rainforests of Brazil.  The Rabbit Track Plant attains a height and spread of about one foot.

Under ideal conditions, Green Prayer Plant will produce small, insignificant flowers in the springtime. When kept as a houseplant, Kerchoveana is unlikely to bloom at all.

Rabbit Track Plant has grey-green leaves with deep purple markings which look like the paw prints of a rabbit or other small animal. The leaves are also deeply veined.

Known as the Kim Prayer Plant or Beauty Kim. This plant is winter hardy in USDA hardiness zones 11-12.

Kim Prayer Plant attains a height up to eighteen inches and can have a two foot spread.

This plant is a hybrid and does not typically set flowers. If it does, collecting seeds is not recommended because offspring will not grow true from seed.

The large, oval leaves of Beauty Kim are mostly deep green with deeper green spots and some yellow variegation. Younger leaves may have brownish or burgundy spots, but these fade to deep green as the leaf grows.

This pretty plant has a trailing growth habit and typically attains a height and spread of between 12″ – 18″ inches.

is also called the Red Prayer Plant. This plant originates in Brazil and is winter hardy in USDA hardiness zones 11-12.

This pretty, tri-colored plant attains a height and spread of about one-and-a-half feet.

From May to June, outdoor plants may produce two-lipped, white flowers which display purple spots atop tall, slender spikes. When kept as a houseplant, Red Prayer Plant seldom, if ever, blooms.

is also commonly referred to as Maranta Lemon Lime.

Other common names include:

Prayer Plant Lemon Lime is a slow growing plant and may take up to five years to attain full maturity. The plant has a maximum height and spread of about twenty inches.

This hybrid plant may produce tiny, short lived white or purple flowers in the springtime. Most gardeners simply remove them as they are nondescript. Saving seed from the flowers is not advised because the plant will not grow true from seed.

Native to the woodlands of Brazil where it is a natural groundcover and a source of food. It is also known as Prayer Plant or Arrowroot.

This interesting groundcover attains a height of about 6″ inches. Individual plants may have a spread of up to fifteen inches.

This tropical perennial woodland understory plant will produce insignificant white flowers year round when kept outdoors in a tropical or semi-tropical setting.

The relatively small, oval leaves of this Prayer Plant are dark green with pale green coloration surrounding the veins. The leaves’ undersides are an attractive shade of lavender.

Maranta arundinacea is a tropical, evergreen perennial plant native to woodland settings in both north and south America. The plant is prized as a source of food and is known by the common term, Arrowroot.

You may also hear it referred to as:

It also has a number of medicinal uses in folk medicine and can be grown as a groundcover in a woodland setting.

Maranta arundinacea attains a height and spread of about three feet.

Bermuda Arrowroot produces pairs of tiny white flowers atop long, slim stems throughout the spring and summer. The small blooms look rather like those of a gloxinia and are very attractive to pollinators.

The leaves of West Indian Arrowroot are unusual in the Marantaceae family of plants in that they are lance shaped and solid green.