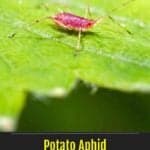 Anyone who’s Irish can tell you how vital potatoes are to the human diet.

Alongside their fruity tomato kin, they’re among the most widely used vegetables and incredibly popular in crop gardens.

But despite being fairly hardy plants, potatoes have a natural enemy that can devastate not only your potato crop but also large portions of your vegetable garden – the potato aphid.

Don’t let the name fool you. This isn’t a monophagous (one food source) pest, so you can end up with them even if you aren’t growing potatoes.

What Are Potato Aphids?

As the name implies, these pests prefer potato plants, with the green ones focusing on older, lower leaves.

However, the aphid eggs can overwinter, and the nymphs emerge in April to begin feeding on perennial weeds.

For the earlier parts of the year, members of the Chenopodiaceae family tend to be their main food source before switching around late May to early June to food crops such as cabbages, potatoes, and tomatoes.

This aphid species has a range of tastes, feeding on approximately 200 species across 20 different plant families.

However, aside from the Chenopodiaceae mentioned above family, their preferences tend to be for members of the Solanaceae family.

What Damage Do Potato Aphids Cause?

Chances are, you’ve heard about aphids before and how they suck the sap out of your plants’ leaves like little vampires.

This can leave the plant vulnerable to disease or even other infestations and may even cause infested leaves to die.

Their excrement is full of undigested plant sugars, called honeydew, which attracts ants.

The ants use the honeydew as a food source, and in exchange, will defend the aphids from natural predators.

This honeydew is also a perfect breeding ground for sooty mold, however.

This wingless species is also known to be a vector for several:

How To Control Potato Aphids?

There are available natural remedies that work. However, be warned that chemical pesticides often do more harm than good.

The pesticides can introduce toxins into your food and kill beneficial insects, such as bees or ladybugs, without significantly impacting the aphid infestation.

Even worse, many aphid species are becoming resistant to popular pesticides.

If you must use a commercial pesticide, look for active organic ingredients, such as Azadirachtin (a neem extract).

Speaking of neem, perhaps the best remedy of all is a neem soil soak.

Unless you’re trying to drink an entire bottle, neem oil is perfectly safe for use around you and your pets and usable on most plants.

The soil soak requires emulsified water (literally just 1 teaspoon of Dawn dish soap or pure castile soap per gallon of water), so the oil can mix.

Stir in 2 tablespoons of 100% percent cold-pressed raw neem oil and pour 2 to 4 cups of this mixture over the root zone of your affected plants.

The plant will absorb the neem and its primary ingredient Azadirachtin, which becomes a systemic insecticide.

The neem will cause infertility, loss of appetite, and even interrupt growth cycles in aphids and other pest species when ingested.

Even better, it only harms bugs that pierce the plant to feed so that it won’t affect beneficial insects.

You can reapply every 2 to 3 weeks as a preventative, and you’ll usually notice the population dropping after the first couple weeks of use.

As it’s non-toxic, you can safely treat food crops 24 hours before harvesting.

You probably have rubbing alcohol sitting in your bathroom, but did you know it’s an effective insect killer?

Dip a cotton ball in some 70% percent rubbing alcohol and dab the bugs directly for an instant kill.

Alternatively, you can mix the rubbing alcohol with water in a 1:4 ratio and use it as a spray in the morning or evening.

As the alcohol evaporates quickly, this is another remedy you can safely use a day or so before harvesting.

As long as you deal with any ants first (a bit of diatomaceous earth sprinkled around the base of the plant will work wonders), you can employ Nature’s Little Helpers to help keep an infestation down.

Attract these predators by planting complementary plants, such as marigolds, or you can often order them online.

Lacewings, ladybugs, and parasitic wasps are the three most popular predator species, but other aphid killers include anthocorid bugs, midges, syrphid fly larvae, and even some species of birds.