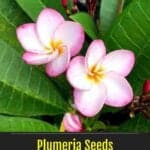 Plumerias have had a lot of attention over the years, becoming the state flower of far-flung countries, achieving religious significance in Buddhist philosophy and the Hindu religion, and becoming the official flower used in making Hawaiian leis.

The popularity of Plumeria plants perhaps explains how 11 species from Central and South America have expanded to include hundreds of cultivars and worldwide significance.

Even though they can only be grown outdoors in USDA hardiness zones 9b to 11, their adaptability to pots has made them a popular tropical plant in homes throughout the US.

The best part is that you can easily make more plumerias once you have one, so their fragrant blooms will grace even more parts of your home.

Plumeria cuttings tend to be the easiest and fastest way to propagate this plant, but you might be surprised to find that you can also grow them straight from the seeds.

Here’s what you need to know about growing plumeria from seeds but didn’t think to ask!

How to Collect and Grow Plumeria Seeds

While it’s easy to purchase plumeria seeds online, you can get far more satisfaction from harvesting your own seed.

Be warned that some cultivars are sterile, so check online if you have a cultivar to ensure seeds are an option.

You will need to harvest the seeds before you can do anything else.

The plant is fertilized in nature by the sphynx moth, hummingbirds, and butterflies.

This means you will either need to let your plant get some time outdoors during the summer (if you’re north of USDA hardiness zones 9b to 11) or try to fertilize the plant yourself.

If successfully fertilized, the blooms will give way to elongated seed pods.

The seed pod must be allowed to mature on the plant and split open when ready, dropping between 20 and 100 seeds each.

The seeds have a wing similar to maple seeds, and while you can tell the pod’s ripening when it turns brown, there’s no way to predict when the split will occur.

For this reason, you will want to wrap some old nylons around the pods loosely.

The nylons are porous enough to allow light through and can catch the seeds as they fall.

Then it’s simply a matter of harvesting the seeds once they’ve fallen into the netting.

It’s a sad fact that “fertile” cultivars tend to have a low viability rate.

Many estimate 1% percent will grow into healthy plants.

This isn’t a big deal with a complete species plant, as they’re usually viable and can be planted immediately or stored up to 2 years but the germination rates will become less as time goes by.

For cultivar seeds, you can check the viability using a 2-step method.

First, feel the seed between your fingers to ensure the middle is thicker and firm, indicating a seedling.

Next, place the seed in a bowl of room temperature distilled water and let it sit for a few hours.

Viable seeds will take on water, losing air and sinking in the process, while sterile seeds will continue to float.

Be warned that the water serves as a catalyst, so you will need to plant viable candidates immediately.

Plumeria seeds will react to two stimuli: moisture and warmth.

There are three methods to do this.

Method 1: Plant the seed wing-up in a seedling pot filled with sterile soil and keep the soil moist, not wet.

Method 2: Place multiple seeds on top of a layer of sterile soil in nursery flats, then cover with ¼” inch of soil, keeping the soil moist but not wet.

Both soil methods usually take 5 to 10 days to germinate, although some seeds may take a bit longer.

When using the paper towel method, plant the seeds as soon as you see roots forming.

Once the seedling has developed 3 to 4 true leaves (not seedling leaves), it’s time to move it to a more permanent home.

Fill the new pot with 1 part cactus or citrus mix to 2 parts perlite.

Avoid planting outdoors until the plant is older.

The seedling will require a balanced liquid fertilizer monthly (ex: 20-20-20) for the first year or two and a warm spot with bright, indirect sunlight and evenly moist soil.

Don’t let your plant go dormant during its first winter, if possible.

Once the seedling has passed its first year of growth, you can transplant it outside, and it will follow all the standard requirements for plumeria care.

Warning: Seedlings are NOT Plantlets

If you are growing from the seeds of a cultivar, the resulting seedlings will have different DNA from the parent and may display traits of ancestors as far back as 7 generations.

Any plant germinated from seeds is called a seedling.

Plantlets, meanwhile, are propagated from stem cuttings and are clones of the parent.

When growing for distribution, it’s unethical to refer to a seedling as a plantlet or by the parent’s cultivar name.

As your seedling grows, you can expect certain height milestones (with some minor variation).

These milestones will help you determine how healthy the plant is.

Note that sometimes a plant will “nub,” appearing to begin the first bloom without actually blooming, then branching off.

Nubbing is often an indicator that the next bloom attempt will be successful.