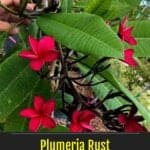 Of all the members of the Apocynaceae family, plumeria (ploo-MEER-ee-a) has one of the greatest success stories.

Native to Central and South America and the Caribbean, this plant has become a global treasure.

It’s a sacred flower to the Buddhist philosophy and Hindu religion, holds connections to marriage and death in numerous countries, and is the national flower of Laos.

But perhaps even more impressive is the fact that plumeria flowers have been essential in making leis in Hawai’i and other Pacific countries for 150 years or more.

However, the plumeria tree has a few problems endemic to the genus: plumeria leaf borers (Lagocheirus undatus) and plumeria rust fungus.

You’ve possibly dealt with rust fungi before, but plumeria rust is a hardy disease that can be difficult to control.

The good news is you can fight it off if you catch it early on or use preventative measures.

What Is Plumeria Rust?

This airborne species only affects the leaves of plumeria plants, spreading via air and water.

It looks like tiny orange-yellow to bright orange flecks of rust on the undersides of your plumeria leaves, but this is only the tip of the iceberg.

The fungus bores into the leaf, causing small lesions and reemerging on the bottom as pustules.

Usually, when you notice symptoms on the upper leaf surface, that leaf is already heavily infected.

What Damage Does Plumeria Rust Cause?

The bad news is it can quickly defoliate your plumeria and won’t simply go away on its own.

The fungus appears first on the undersides of the leaves and isn’t visible from the tops.

As the infection worsens, faint yellow spotting may appear on the leaf tops, eventually spreading, turning brown, and sinking.

Eventually, the lesions will become necrotic, and the leaf will fall off.

Plumeria rust spores can overwinter and will not simply go away on their own.

Even more frustrating is that Plumeria rubra and its cultivars are hit worst, with rubra x obtusa hybrids a close second.

Plumeria obtusa also has a high susceptibility but is more resistant than Plumeria rubra.

According to the University of Hawai’i report at Mānoa, Plumeria obtusa var sericifolia, Plumeria pudica, and Plumeria alba have some resistance to the disease.

The report also states that Plumeria stenopetala and Plumeria caracasana are extremely resistant, although other species were still being researched at the report’s release in 2009.

How To Control the Plumeria Rust?

There are three approaches to handling plumeria rust: maintenance, chemical solutions, and natural solutions, all of which have proven effective.

You should already be practicing these techniques in terms of maintenance, as they can help prevent a wide range of problems.

A few different chemical options are available, most of which use specific active ingredients.

General fungicides such as GreenLight “Fung-Away” have proven useful against mild or early cases of plumeria rust.

A few active chemicals and examples of products containing them include:

In terms of natural solutions, the best method is using a neem soil soak.

We can’t stress the usefulness of neem oil enough, although it is banned in a few countries due to its mild toxicity to aquatic life.

Pour the mixture over your plant’s roots (it’s 2 to 4 cups for a regular houseplant, so scale up according to the current size of your plumeria), being careful not to splash the plant itself.

The Azardchtin contained in raw neem will be absorbed by the plumeria’s roots, becoming a systemic pesticide.

Neem is usually used for infestations, but it can also fend off many microbial and fungal infections.

The neem will kill off any plumeria rust breaking through the leaf surface as a systemic pesticide.

It can take a while for the neem’s effects to become apparent, so have some patience.

Soil soaks protect a plant for up to 23 days, so reapply every two to three weeks as a preventative.