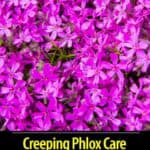 Phlox subulata [Floks Sub-yoo-LAH-tuh] is a flowering plant from the Polemoniaceae family.

This plant is native to slopes and open areas, sandy or rocky places of central and eastern America.

Various kinds of the species such as Phlox paniculata are cultivated, particularly in rock gardens.

The common names of this plant include:

This herbaceous perennial wildflower is a sun-loving, mat-forming, fast-spreading, and vigorous phlox, which grows about 6” inches tall, but spreads around 24” inches wide.

This plant is famous for its stunning colors and creeping habit.

It forms awl-shaped to linear-shaped leaves, which look stunning in any landscape.

During April and May, Phlox subulata produces a carpet of beautiful flower color.

All of the flowers have flat, five rounded lobes, which are notched.

The flowers are in varying shades of pink, violet-purple, and in rare cases, white flowers.

The semi-evergreen foliage color is green but with needle-like foliage.

However, this plant produces the heaviest flower when they are positioned under the sun.

It is best to put this plant in the vernalization process for at least eight weeks between 35° – 44° degrees Fahrenheit (2° C – 7° C) to produce uniform flowering.

Otherwise, they produce flowers when grown at 60° degrees Fahrenheit (16° C).

The creeping phlox prefers to stay consistently moist when it is young, but once it is established, it becomes highly drought-tolerant.

It doesn’t like to stay in wet or soggy soil, which often results in the rotting of the roots or other diseases.

When this plant grows in a container or pot, it prefers to stay consistently moist or damp.

It is best to avoid overwatering and to ensure the soil doesn’t stay overly soggy.

Make sure the soil gets somewhat dry between watering before giving a good soaking to the soil.

Ensure the water has good drainage.

When grown in a container or in the ground, for massive flowering and enhanced growth, feed Phlox subulata with organic plant food or slow-release flower fertilizer during the early spring or late winter.

This plant grows best in well-drained, but evenly moist soils, which are loaded with compost or humus.

It likes the soils with neutral to slightly alkaline soil pH levels.

However, it also grows well in clay soil, gritty or sandy soil, dry soil, and thin soil, as well as soils with acidic pH levels.

This plant requires little maintenance and care when it is growing.

It is best to provide fertilizer during early spring to encourage flowering and new growth rate.

When the plant is established, it benefits from supplemental watering, especially during hot summers.

The plants growing along rockeries might start scorching during the hot season if not sufficiently watered.

It is recommended to cut back stems after the flowering season to enhance its second bloom time.

Cut back the plant during the late winter season to enhance new growth habit, as well as compact stems.

How to Propagate Moss Pinks

The propagation of this plant is done through division.

Propagate every two to three years to keep plants healthy through stem cuttings during the fall or summer season.

It is best to plant the cuttings in a soilless medium to begin the rooting process and then transfer it to its permanent location.

This plant is not much affected by powdery mildew the same way other phlox species are affected.

However, it is best to be on a lookout for spider mites, especially during dry and hot weather.

Foliar nematodes might be a problem during humid and wet conditions.

Moreover, be on the lookout for rabbits as they like feasting on this plant.

It is recommended to immediately handle any infestation by utilizing organic insecticidal soap to avoid potential damage and enhance the care of this plant.

This plant looks excellent as ground covers, in foundations, edgings, and rock gardens.

The most popular use of this plant is for ground covers, especially in sunny locations of naturalized areas, native plant gardens, slopes, and woodland gardens.

This plant looks stunning while slightly draping over a rock wall.

Their spring flower display is most beautiful when planted on slopes to be easily seen.